A Flintloque Scenario by Christian Cuello 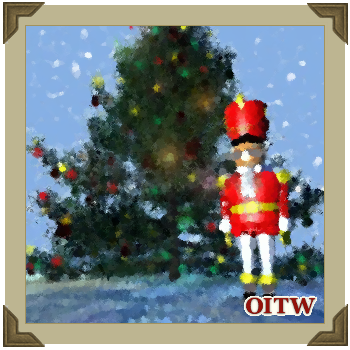 Following the events of Cryptmass Eve, Drosselmeyer - the Toy Maker - and Morozko – none other than Grandfather Frost – make haste across the snowy wastes of the Witchlands in an attempt to dissuade their pursuers.

"Hurrah, we’ll stick together,
And always bear in mind
To eat our puddin’ gallantly,
Whenever we’re inclined."

"It is no use" Dorsselemeyer puffed "I cannot continue". His tiny frame slumped back into the snow, what few possessions he had time to pack in a small rucksack next to him. "...Morozko?" He glanced around for his companion after a few moments silence. He cocked his head as he thought he made out the sound of pursuit. For the last few hours they had been hounded through the snow, until they reached a truly benighted part of the Witchlands forests. In the wan light of the morning that filtered in through the canopy of twisted and gnarled branches he made out the form of Grandfather Frost looking, for the first time he could remember, somewhat worse for wear. Alongside him stood one of the pair of the wooden sentinels – a Nutcracker – created to protect to the Toy Maker.

Drosselmeyer picked himself up out of the snow and approached his companion. Morozko made a sound like the distant howling wind, drawing in what appeared to be a ragged breath. Drosselmeyer squinted as he tried to make out Morozko’s frame that for a brief moment seemed to flicker out like a flame... but he convinced himself he had seen otherwise.

"The Magyck here, is... foul... unlike anything I have encountered..." explained Morozko "And... we are lost."

The two briefly discussed their plan, and although he feared to be left alone, Drosselmeyer accepted that this was for the best. Grandfather Frost would have to get his bearings and recover his strength. The fouled Magyck of the blighted wood was sapping his life force, his very essence. In all his travels he had not encountered such a thing. It was not so much that his powers were nullified, but his magyckal soul was being unravelled, in a sense... perhaps warped. The Nutcracker that remained to defend Drosselmeyer would eventually also cease to function, the signs already showing on patches of splintered wood, his bright paint fading.

Resolved to fight his fear, and reassured that Morozko would return soon, Drosselmeyer bid his friend farewell. "I will be back soon, my friend" he strained to draw himself to his full height "...the future of Cryptmass depends on it!"

With a concerted effort a fresh breeze turned into a more prominent gust in the stale atmosphere of the forest. Snow flakes and brief, glittering swirls formed around Grandfather Frost, and in an instant, he was gone – leaving Drosselmeyer, alone but for his silent protector in the dank foliage. His resolve seemed to fade as the gloom of the forest surrounded him.

Moments passed, although to the Toy Maker they seemed like an eternity. At times he thought he heard a metallic clink, at other times cries echoing through the forest. Was it his imagination? He instinctively took a step away from the sounds, but, thought twice. He was to stay here... or Morozko would never find him. Surely he would be back soon?

At that, he heard a far off crunch of footfalls in the snowy, slushy undergrowth. He was certain now that they had been followed but by who, or what? Was it the troops of that blasted Mordred? Or the followers of the mysterious stranger that appeared on his doorstep only days ago? A creak from his otherwise silent guardian caused him to glance around the small clearing where Morozko had left him. As the Nutcracker slowly turned to survey their surroundings, Drosselmeyer nervously clutched his rucksack. Whatever could he do? His mind racing he tried to recall what he’d packed but drew a complete blank. The sound of footfalls could be heard again... were the closer? He glanced around in a panic. In the weak light the twisting branches made cruel shapes, the hollows of tree trunks look like gaping mouths in petrified faces. He could hear the thump of his heart pounding in his ears as he instinctively groped inside his rucksack for something... anything...

From the forest stepped forth shadowy forms that Drosselmeyer could not quite make out in the twilight. He clutched something from his pack and wrenched it out before the last of the Magyck at his command pulsed into his hand and out... he flung the object before him.

It was a pudding.

Preparing for the worst his pursuers hesitated for a moment. The pudding shook slightly.

Then it shook violently and flipped into the air. A miniscule stem emerged, and from it two wiry arms and two spindly legs upon which it promptly landed. It staggered, as if drunk, and bellowed as it stretched itself to its full height.

To everyone’s surprise, the Pudding sang out:

‘The fruits been quartered, mashed and chopped,
The dough’s been kneaded, rolled and dropped.
The brandy, gen’rously proportion’d,
Once I’m baked you’d best be cautioned:
Not to eat me right away,
But let me age for days and days,
Until one whiff will send you tipsy:
COME ON, YOU LOUTS, JUST TRY TO EAT ME!’

With all the attention of the starving soldiers on the Magyck Pudding, Drosselemeyer saw his chance to escape. He backed away slowly while the Pudding skipped around erratically... no one daring to take their eyes off him.

‘Eat away, chew away, munch and bolt and guzzle,
Never leave the table till you’re full up to the muzzle.’ (2)

The Pudding cried, as it danced tantalisingly around the edge of the clearing and within arm’s reach of the surrounding soldiers.

If the Pudding could keep this up, he could surely slip away...

The aim of this scenario is to help Droseelemeyer make good his escape from his pursuers, or to help said pursuers catch him before Father Cryptmas returns. The table should be set up similar to the diagram below, with as many clumps of trees and foliage as possible. They are, after all, in the middle of a spooky forest: 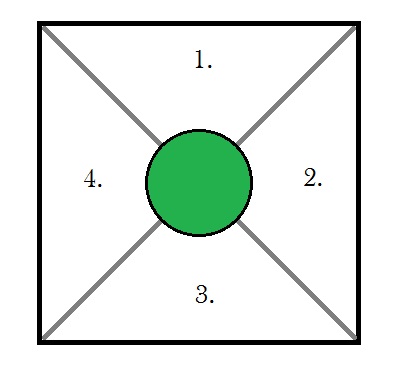 Drosselmeyer, his Nutcracker companion and the Pudding all deploy in the centre, which should be represented a small clearing.

The opposing force – a section of no more than 12 figures – are scattered by randomly assigning troops to a particular section of the quadrant.

It is the objective of the opposing force to capture the Toy Maker before Morozko returns in 10 turns.

The Pudding has been imbued with life by the magyckal abilities of the Toy Maker, which are somewhat warped by the enchantments upon this particular forest. Thus, while not malicious per se, the Pudding is somewhat bad-tempered (not to mention the generous portions of Brandy that have been fermenting away!). His purpose in life is to be eaten. Unbeknownst to the Toy Maker upon his creation, the Pudding has the ability to regenerate completely – even while being eaten! For the starving troops – mortal and zombie (to whom the pudding looks like a tiny brain) alike - he is a tantalising target. And so, the ravenous troops are irresistibly drawn to the Pudding despite their better judgement.

The Pudding will draw a charge action from any enemy troops able to do so. If they are able to make a successful melee attack they have taken a generous bite out of the Pudding and are susceptible to the effects in the Alternative Armies supplement "Distractions & Asides 1: The Demon Drinke" (see the Grandfather Frost entry here on Orcs in the Webbe for more details).

This can be interrupted by the section Leader, unless he, too, is stuffing his face with pudding!

Once the enemy has taken a bite the Pudding automatically breaks away.

The Toymaker is one in a long line of master Gnome craftsmen who have taken a solemn oath to defend the world of Valon from the encroaching hordes of the Witchlands in the best way they know how. Every year they prepare a small army of wooden toys, enchanted to follow simple commands, to bring hope to the children of Valon.

His statistics follow those for Gnomes found in the Bier and Bones rulebook.

As the Toymaker fashions small guardians for the children of Valon, so is he guarded by his own creations. These Nutcracker is one of two that usually stand by the Toymaker’s front door, but will also accompany him if he leaves. The Nutcrackers have the Defensive characteristic as per the solo play rules.

The statistics for the Nutcrackers are the same for Regular Ogres, being quite large and tough, and of an Average quality. They carry standard muskets. The Nutcrackers can only be activated within 4cm of the Toymaker’s workshop or the Toymaker himself. The Nutcrackers do not suffer Shaken effects, but are highly susceptible to attacks from fire.

Legend has it that the Magyck Pudding survived this ordeal and travelled far and wide across Valon and into the ages. For a full account of the Magyck Pudding’s adventures in the far flung lands Downe Under into the Fourth Age and beyond, refer to the account of Mr. Norman Lindsay titled "The Magic Pudding: The Adventure of Bunyip Bluegum".

This article is an Orcs in the Webbe Original and was first published on the 8th December 2014 as part of its 2014 Advent Calendar.