Craig Andrews
is proud to present for the benefit of several audiences... 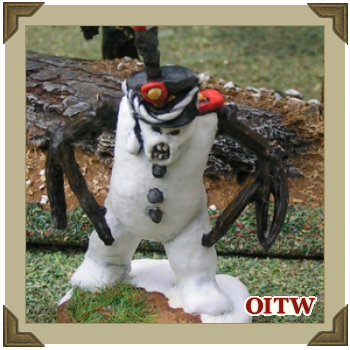 (and perhaps one or two other more unexpected diversions)

Back in 2007, as a Christmas gift to it's readers, Orcs in the Webbe became an Advent Calendar of sorts. Instead of chocolates or sweets though, each day it published a piece of content for the twenty four days running up to Christmas. It was so popular that we here at OITW decided to make it an annual event.

For it's first year the Advent Calendar was mainly comprised of old articles from a variety of sources but it did also include a couple of exclusives. At the time Flintloque was in it's Reloaded incarnation so I took this opportunity to update many scenarios to follow Reloaded's more structured scenario format, something which sadly took much longer than the actual pay off. It did however keep my interest in Flintloque alive and saw the first of what I humbly believe, to be one of the best content driven Advent Calendars there is ;)

Below you can see what was published back in 2007, including the first Orcs in the Webbe Christmas original article and the first of the annual Alternative Armies interviews!

Craig Andrews
Orcs in the Webbe

Webmaster's Note:
The current version of Orcs in the Webbe was launched in December 2013 with most of it's exclusive content in place.
The missing non-original articles referenced below will return to the site as part of the Flintloque Archive Project during 2014.

Sunday 2nd December - A Bit of Flintloque Fluff
The Dracci by Various
Whatever happened to the mysterious Dragon kin from the east....

Monday 3rd December - A Flintloque Scenario
Sharke's Wagon by Simon Evans
Sharke and his Rifles lie in wait for a Ferach Wagon laden with booze.
(Includes rules for Ambushes in games of Flintloque Reloaded!)

Tuesday 4th December - A Story from Valon
Otto's Folly by Mac Coxhead & Steve Blease
The piece of fiction that started it all, Otto's Folly tells the tale of the fall of the humans at Dresda.

Wednesday 5th December - A Flintloque Scenario
Tales of Albion: A Midnight Feast by Matthew Hartley
Back home, away from the Mordredian Wars, lower class Orcs are forced into poaching to feed thier familes.

Thursday 6th December - A Background Article for Flintloque
Not Bitter ! (Just Getting Even...) by Steve Blease
Details of the Guinelian Plight against the Albion oppressors.

Friday 7th December - A Flintloque Scenario
Tales of Albion: The Smashing of the Van by Matthew Hartley
The Mix try to liberate two of thier captured comrades from the clutches of the Orcs of Albion.

Saturday 8th December - A Story from Valon
Rolling Fyre by Gavin Syme
Private Titus Grime and the Orcs of the 60th fight the Ferach in this story direct from Alternative Armies' own Gavin Syme.

Sunday 9th December - A Flintloque Scenario
Over the Hills and Far Away by Steve Blease
A group of Goblins try to break through a Dark Elf blockade to get a religious artefact to safety.

Tuesday 11th December - A Flintloque Scenario
Prisoner Snatch by Steve Blease
A small section of Orcs on piquet duty find a surprise waiting for them in the woods...

Wednesday 12th December - Rules for Flintloque
Native Human Scouts by Peter Bowkett
After the fall of Dresda Humans became scarce on Valon, however some hardier ones didn't die out straight away...

Thursday 13th December - A Flintloque Reloaded Scenario
Legion of the Doomed by Andrew Davey
We catch up again with The Old Man and his section of criminals deep behind the lines of the Star Wraith.

Friday 14th December - A Background Article for Flintloque
The Kinkon Delta by Steve Blease
Follow the exploits of the Union of Seccesionist Albionites (U.S.A.) as they fight Goblin Pyrates and Water Dragons in the Kinkon Delta.

Saturday 15th December - A Story from Valon
The Memoirs of Sergeant Graznak, Part the Fourthe by Mac Coxhead
Catch up with the further exploits of Graznak at Port Bristle and beyond.

Sunday 16th December - A Flintloque Reloaded Scenario
Tales of Albion: The Blackleg Miners by Matthew Hartley
Help the hard working Orcs of Albion strike against McGrogger and his Guinalean Blacklegs.

Monday 17th December - A Background Article for Flintloque
Uniformation - High Elf Line Foot Artillerie by Simon Evans
A closer look at the organisation and uniform of part of the Usurper Mordred's army.

Wednesday 19th December - A Flintloque Reloaded Scenario
The Outlaw Blues by Simon Evans
Join Captain Proust and his Garde Municipal on a search for wanted criminals in Armorica away from the front lines of the war.

Thursday 20th December - A New Festive Character for Flintloque Reloaded
An Orcs in the Webbe Original !
Grandfather Frost by Craig Andrews
Read about how a Faerie herald lost all he loved and became Grandfather Frost, doomed to wander the frozen lands of the Star Wraith in search of hope.

Friday 21st December - A Background Article for Flintloque
The Year of Librerties by Danny O'Hara
A glimpse at the Bog-Orc Rebellion in Guinelea.

Saturday 22nd December - A Flintloque Reloaded Scenario
Sharke's Enemy by Steve Blease
Can Sharke and a group of Redcoats try to delay the Ferach advance until the Army of Albion arives.

Sunday 23rd December - A Dresda Article
A Fistful of Groats by Steve Blease
Some random thoughts on how to approach the original pre-Flintloque game of Dresda, also chock full of scenario ideas for any AA game...