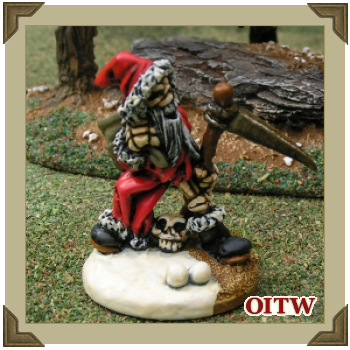 How a Faerie herald lost all he loved and became Grandfather Frost, doomed to wander the frozen lands of the Star Wraith in search of hope.

Before the coming of Aleksander the Star Wraith and the Fimbulwinter which swept part of Valon, the territories now known as the Witch Lands were fair with beautiful pastures and enchanting valleys. The calming natural beauty drew many races, some of whom chose to live there, making homes among the serenity of the trees and rivers. One such creature was a Faerie by the name of Morozko. Tired of the eternal political battles in his home court, Morozko asked the Queen of the Faerie for leave to dwell in the human's land, and due to years of good service he was granted his request.

Within a few short years in the mortal realm Morozko met and fell in love with a human woman from a local village and they married. A few years later they welcomed a beautiful baby girl into their family and with the passage of time she grew and married and had a child of her own, a baby girl she named Anyoushka. Morozko and his wife lived a long happy life but as a mortal woman eventually one day her light faded and she passed. After months of mourning, Morozko, who as a Faerie remained as youthfull and vibrant as the day he had first come to Valon, realised he was still the head of a beautiful family and he understood that his wife would not have wanted him to miss out on the joys which families can bring. After a while he started to enjoy life again, he even started teaching his grandaughter of the old ways and the mischief he had gotten up to back in his younger days in the Faerie Court. Life at this point seemed perfect and Morozko wished he could freeze this moment so he could enjoy it forever. A wish he has forever regretted.

A few days before the turn of the year celebrations were to begin, Morozko's daughter and her husband were visiting one of the major settlements to get supplies, leaving Morozko and his grandaughter to collect wood to heat the cabin and bracken for the festive decorations. A few hours after they had begun they noticed the forest had grown quiet, nothing stirred, even the inquisitive but gentle Diberian wolves one usually saw were strangely absent. Morozko felt something was drastically wrong, he and Anyoushka started to head back to the house. As they hurried through the forest they noticed the few remaining leaves on the hardier trees were getting colder taking on an almost glass like appearance, and a light covering of frost was creeping up the trunks of the trees. Morozko knew this was no natural winter, he could sense the magical energies building, he urged Anyoushka on, knowing they must get back to the safety of the home he had built before whatever was occurring took full hold.

Unfortunately, even though they knew the forest better than most, they were not quite fast enough. Within sight of the magical shelter of the cabin, the full force of the Fimbulwinter hit them. Anyoushka being only part Faerie was the first to fall, as Morozko watched she fell to the ground and the layer of frost slowly encompassed her, he himself stumbled feeling the oppressive weight of the magical cold dragging him down. Sparing no thought for himself he summoned the last vestiges of his faded power and cast a spell granting Anyoushka the strength of the land in an effort to protect her. His last thought before the darkness claimed him was that he had not done enough to protect his family...

The power of the Fimbulwinter transformed all life it touched, the land grew cold and the living died, only to awake under the control of Alexander, the Star Wraith.

Greatly changed by the effect of the Fimbulwinter, Morozko is no longer who he once was. The Fimbulwinter did transform Morozko into an undead, but because of his innately magical Faerie heritage he was not affected by the control of the Star Wraith and retained his independent thought. Now as Grandfather Frost, he roams the snow ridden Witch Lands trying to find the power which will let him restore his family. He counts as undead for any rule purpose not mentioned directly below.

Note that these stats are for Flintloque Reloaded, they can easily be converted for use with Flintloque 3rd Edition.

"Baby, you'll freeze out there": As an action Grandfather Frost may harness the power he absorbed when he was changed by the Fimbulwinter and freeze up to three characters within 20cm. All three targets cannot move for that turn.

Morozko's last spell did not have the desired effect on Anyoushka. Merging her with the land around her as the power of the Fimbulwinter took over her body she became one with the newly corrupted frozen earth. Also retaining her independence due to her partly magical heritage she can now help Grandfather Frost in his search by manifesting as up to three snow constructs every day, which may appear simultaneously. Made of hard packed snow, ice and earth they arms themselves with old gifts from Grandfather Frosts sack. All three count as undead for any rule purpose not mentioned here.

As with Grandfather Frost, these stats are for Flintloque Reloaded, they can easily be converted for use with Flintloque 3rd Edition.

Snow Maiden with sticks for arms (+1)

"Everyone's problems disappear": The Snow Maidens can, as an action, sink into the ground and reappear on any snow covered surface up to 50cm away next turn. They receive a -6 penalty on the turn they are sinking into the ground, they ignore any pushed back results received as a result of this combat. If declared before initiating melee combat, they may choose to grab someone instead of harming them. If any wounds are scored the character they are attacking is considered held. Once per game, they may choose to take one allied or one 'held' enemy with them when they sink into the ground. The character suffers a -6 penalty in any melee initiated and receives 1 wound when the re-appear elsewhere next turn.

"I just might get into a snowball fight!": The Snow Maiden's may if given a fire or move and fire action throw a snowball. Use the rules for rocks as found in Alternative Armies supplement “Distractions & Asides 2. Thrown Rocks & Knives” which can be found in the files section of Alternative Armies Notables Yahoo group. They do not have to search for rocks.

As an optional rule before the game the Grandfather Frost player can place 1d6 Christmas Pudding anywhere on the table, they should be treated as alcohol as per the Alternative Armies supplement "Distractions & Asides 1. The Demon Drinke" which can be found in the files section of Alternative Armies Notables Yahoo group.

1. A group of the Star Wraith Aleksander's forces are approaching Morozko's cottage to find out it's Faerie secrets, he and his daughter need to defend it. Add into this an exploratory skirmish unit from Urop and it would make for an interesting three way game with varied objectives...

2. Christmas near the front, in a bid to find something to help his family, Grandfather Frost could be stealing gifts from the tents of the soldiers whilst they are playing the seasonal Futbowel game...

There are many possible ideas, don't forget too they are not necessarily evil characters. Their motivations are honourable despite what they've become, but who knows to what lengths they'll go to to achieve their goal.

I wanted some rules to cover the limited edition Vignette that Alternative Armies produced back in 1996. It featured a splendid skeletal Santa and three snowmen helpers on a sculpted base, the above is what I came up with.

This whole idea is based on the Russian version of Santa Claus, Ded Moroz (which translates as Grandfather Frost). If you are interested in finding out more check out the excellent entries on wikipedia, it's where I got the inspiration from.

I gave Grandfather Frost Vampire stats as it seemed like the undead creature closest to what I wanted Frost to be able to do. If you're wondering where the extra stats came from he's an Elite Veteran as even before the Fimbulwinter he was immortal and spent many many years serving the Queen of the Faerie. I gave him an exquisite +3 weapon (so +5 in total) as I wanted him to pack on hell of a wallop in melee combat. Spell wise he needed to be able to freeze people (as per the original fairy tale) and Death's Cold Embrace (Potent) fitted the bill perfectly.

The idea and stats for the snowmen came about slightly differently, in Russian lore Grandfather Frost was often accompanied by his grandaughter, Snegurochka (Snow Maiden). By using the idea of merging her with the land it meant that they were effectively three animated statues with a few special powers of their own. Obviously being made of the frozen earth they could throw unlimited 'snow' balls and also the Evil Mist spell was easily adapted to allow them to disappear and reappear somewhere else as all earth based golems/constructs should be able to do :) I have armed them as per weapon type on the miniatures with the Broom being a large improvised weapon, the scythe a +3 weapon and the third one with sticks for arms is treated as being armed with small improvised weapon.

"He knows if you've been bad or good" - Santa Claus is Coming to Town, J. Fred Coots and Haven Gillespie (1934)

This article is an Orcs in the Webbe original and was first published on the 20th December 2007 as part of it's 2007 Advent Calendar.

Any feedback is welcomed, as are any suggestions or ideas featuring Grandfather Frost.