Orcs in the Webbe
is proud to present for the benefit of several audiences... 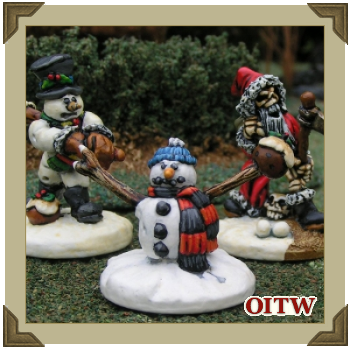 Another year another calendar :) After the success of the 2011 calendar and the kind words throughout the year there was never any doubt about running the calendar again in 2012. Once again a load of people agreed to create some splendid articles which coupled with the smoother OITWv6 interface made it one of the best years yet.

A lot of thoughts about how to proceed with the site kept running through my mind and I think I have decided on the direction and release schedule for 2013.

Come back on March 1st and you'll see the start of my funding drive as well as a return of the Saints Days scenarios that were so popular in previous years.

Saturday December 1st
"I Fought The Lore" by Matthew Hartley
In this whip cracking Tale of Albion we find some prisoners on a chain gang serving out their sentence. Can the wardens keep order or will the gangs fulfill their secret objectives.

Sunday December 2nd
"The Legend of Charlie Grey" by Tony HarwoodA proud young Orc of Albion serves his country and Kyng in both this life and the next.

Monday December 3rd
Dreadloque III - The Goblin in the Smoke - Interlude: "Something Strange in Them There Tydes" by Craig Andrews
Carrying on the story where we left it back in 2009, the 'Ambassador's Daughter' has been captured by our heroes and the evil Bron's plans have been averted. But as oft is the case all is not what it seems...

Tuesday December 4thSculpting: A Q&A with Dave Toone
Dave Toone, the main sculptor of Maveryc's new miniatures game, Pax Bochemannica, answers some questions about himself and his work in the first of this years Christmas Interviews.

Wednesday December 5th"Run For the Hills! (or How The Goblins Rose in Height)" by Gavin SymeAl-Garvey Goblins and Ferach Elves clash over a disputed hill on the border between Al-Garvey and Catalucia.

Friday December 7th
"Online Build - Goblins Masterclass" by Tony Harwood
In Tony's second online build for OITW he turns his attentions towards the Goblins of Al-Garvey.

Saturday December 8th
"Pegasus Hussars" by Ed Proctor
Flintloque 3rd Edition rules for one of the most ancient Valonic light cavalry regiments formed before the annulment of the laws of Wylde Magicke by one of the old Kings of Armorica.

Sunday December 9th
"The Battle of B'Water" by Bob Minadeo
Giglamps has been tasked with traveling up the Bomoo River to track down the rogue officer Colonel Blyng. Before the search begins he must first make landfall and get to the town of B'Water, however, D’Katha Bey and his 9lb gun may have a thing or two to say about that.

Tuesday December 11th
"Dag's Nificent Seven" by Luke Passingham
The Catalucian village of Trampa Mortal is under threat from desperate bandits. Can the unlikely hero of Dag Nificent and his rapidly assembled group of even more unlikely heroes win the day...!

Friday December 14th * Note 2
"The Road to Xiangliu" by James Chapman
The Artful Dodgers street gang attempt to stop a ritual by their rivals, the Hongs, that threatens to upset the balance of power in the area surrounding Golden Square, Soho in Georgian London.

Saturday December 15th * Note 3
"Death Out of Sight but Much in Mind in Llednevir" by CJ Hooper
Something stirs deep beneath the town of Tarrwen Harbour. In this fourth Llednevir Chronicle can the survivors of the Sea's wrath face the many faces of of Nyarfoxtrotqwikstep.

Monday December 17th * Note 4
"The High Price of Miruvoré" by Danny O'Hara
Being a cautionary tale of SMUGGLING and other divers CRIMINALITYS acted out by the feckless small-folk in dark corners of our own ALBION!

Tuesday December 18th
"Sharke and the Mirror of Zyrgone" by Gavin Syme
Arry Flashorc has called in a favour from Rekhardt Sharke asking him to pay a visit to the Notables Club in Mudfayre, Londinium and make sure nothing amiss occurs during the magicke mirror show. What could possibly go wrong...

Wednesday December 19th
"Sharke's Mirror" by Gavin Syme
Sharke and his lads rush to the Notables Club, Mudfayre, to deal with a terrifying threat from another time...

Thursday December 20th
"Dreadloque III - The Goblin in the Smoke - Act II: "The Baron's Mansion" by Craig Andrews
Our heroes have made it to the Baron's mansion. What will they find within in this Flintloque/Cluedo crossover for one to four players...

Friday December 21st
Nothing. Whoopsie doo. Busy time of year. My fault again, one of mine, just didn't have time...

Saturday December 22nd
"Stoneheart in Jocalia" by Jaffa Holland
Believing himself a hero for his previous task, Stoneheart is shocked to be banished by the Dwarves and sent on another quest. This time to Joccia of the Darke Age... Jocalia as it was known. Home of the Rat Tribes and much, much worse...

Sunday December 23rd
"Sharke's Aquila" by Steve Blease
Sharke's Rifles have been transported to another world by vile Magicke. This time they face skirted Orcs with swords and an Eagle the likes of which they've not seen before...

Christmas Day
"Coalfinger" by CJ Hooper
Returning home to Caer Dyff, Austin is horrified to find his people in the thrall of the villainous Ernst Coalfinger, the Orc with the miner's touch...

*  Editor's Note 1 - Eagle eyed viewers may realise this is in fact a fib and this was first published here on the 14th due to unexpected birthday surprise activities...

* Editor's Note 3 - Hmm, I see a pattern devloping. Actually published on the 16th.

* Editor's Note 4 - Fear not, the missing adventure from Sunday the 16th will appear soon...