The High Price of Miruvoré

"The High Price of Miruvoré" 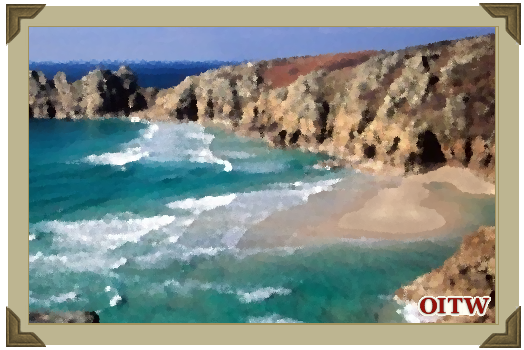 Being a cautionary tale of SMUGGLING and other divers CRIMINALITYS acted out by the feckless small-folk in dark corners of our own ALBION!

During the long Mordredian Wars, the Government of His Monstrosity King Gorge of Albion has resorted to more and more devious and brutal taxes to wring every penny out of the hard-working populace (well, OK, most Orcs don't do hard work, but you know what I mean!). One of the most hated institutions which this fund-raising drive has created is the “Office of Traditions” that enforces such traditional notions as “You don't import or export anything without giving us a cut” and “Anyone who thinks they can is in for a good kicking”. The price of many luxury goods (and some not so luxury!) has soared, and a thriving smuggling industry has arisen.

One of the most sought-after items, officially banned due to a trade embargo on all Ferach-produced goods, is that Elven elixir miruvoré. As they say, “Away with your pills, it'll cure all ills”, and the richer eschelons of society will pay good money for the stuff. Smuggling gangs will take great risks to bring it into their black market, and the Office of Traditions has declared war on the illicit miruvoré trade. The Traditions Orcs are now jokingly called the “Exorcise Orcs” as they try to drive the spirit out of Albion.

In many areas with thinly populated coastlines, the local layabouts and criminals run regular trips to Ferach ports where they buy banned goods with gold provided by corrupt Albion magistrates and land-owners. They make these runs in light, fast and shallow fishing craft known as “buggers”; partly because they can either outrun bigger craft, or escape across reefs and shallows, and partly because if they do get caught then it is probably the end for them! To counter these, the Navy initially sent sloops and frigates, but eventually a slightly larger version was developed for use by the Exorcise Orcs, and became known as “slashers” for the way they cut through the water and catch smugglers. This war in the Orcs' backyard has become a dirty campaign of skirmishes at sea, on land and in the hearths and homes of the communities involved. The following is an example.

Pinz Handz is a port at the far end of the Duchy of Kernwell, itself one of the remoter parts of Albion. The locals here are surly, secretive and distrustful of furreners (which usually means “anyone who doesn't drink in the same pub as me”). With many of their trades and amusements restricted by law during the Wars, they have moved into the new business of smuggling. The Navy and Traditions forces in the area are at full stretch, and little help seems forthcoming from local magnates. The officials think that most of the gentry are either up to their snouts in the trade, or are frightened of the consequences if they give evidence against those who are.

One of the better organised of the local smuggling operations is led by Jethrúg Trechewey, an old fisherman and petty crook. He is backed by Squire Tomfoolery, a local land-owner and magistrate, who provides both gold to buy the goods, and storage on his property from which it can be distributed. The smuggling keeps many of the locals busy and solvent, and makes Tomfoolery a lot of cash. Given this economic incentive and the native clannishness of the Kernwellians, nobody has yet pinned any charges on either Tomfoolery or Trechewey.

But, into this cosy little world of black marketeering has come an enthusiastic, energetic and above all honest Traditions Officer. Captaining the slasher “Gothmog”, Agent Bárnabaz Strikka of HMOT has started to close in on the smugglers. A few hints from the mainly unreliable informants in the area, plus some hunches and shrewd calculation have seen Strikka almost nab the gang on a few occasions. As Gothmog patrols the coast along Pinz Handz Bay one moonlit night, a look-out spots a low, dark shape flitting past and towards the shore. Putting telescope to his eagle-eye, Strikka realises with relish that he has the bugger “Kraken's Dance” in his reach. This is Jethrúg Trechewey's own craft, and a neat little prize she would be too! The bugger will certainly make shore before him, but won't be able to offload her cargo unmolested.

Barking out orders to his crew, he set Gothmog to the chase. Their quarry had a head start and knew the waters better than him, but Strikka could sense blood and promotion! Ahead of him the smuggler crew jinked and tacked between rocks and sandbanks, and the bigger ship had to slow to sound her way through. As they approached the beach where wagons and labourers waited to remove the cargo, Trechewey took the decision to beach the boat rather than get caught at sea – with a crash the bugger grounded herself and the crew jumped to carrying the barrels of miruvoré off. Wagons moved up to take it, and the labourers started to help the crew.

Offshore, Strikka called out to the smugglers to surrender (answered with jeers), ordered that a signal rocket to be fired and that his crew man the longboat and make for the beach. The signal rocket should bring the local militia out from Pinz Handz, but in the meantime his jolly lads would get to grips with the dastardly smugglers!

If you have the terrain pieces for it, set up the beach and foreshore as follows (you can leave out the strip of surf/sea without any real problem – but it does look nice!): 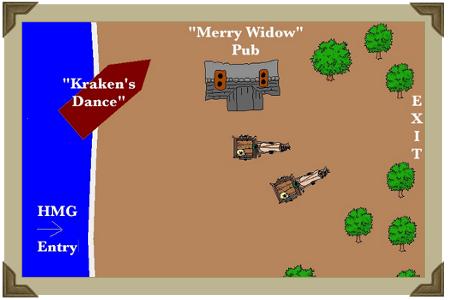 The forces involved are:

8 Crew from the Gothmog (Average Orcs with Bessies and cutlasses)

(The Gothmog crew are a Regular unit).

(The Militia are a Militia, surprisingly!)

The Free Traders (or Smugglers)

8 Smugglers (Orcs with pistols, blunderbusses, muskets and melee weapons [whatever mix you can put together]. Random quality; roll 1d6 for each: 1-3 Raw, 4-5 Average, 6 Experienced)

(The Smugglers are a Guerilla unit).

Bobz and Nobz, his two servants/bodyguards (Experienced Orcs with axes)

(The Squire and his bodyguards count as a Regular unit).

Tomfoolery and his entourage start in the pub. The Wagons and Drivers/Labourers start outside the pub. The Smugglers are in and around their beached vessel, and the Gothmog crew come on in two longboats (each with four crew and either Strikka or Master Baihz). One longboat will land on the first turn, the other on the second. The Militia will arrive after d6+6 turns.

There are 16 barrels of miruvoré in the Kraken's Dance – each one can be carried by one Orc moving at Half Step speed, or two moving at Slow March. Figures carrying barrels cannot carry out any other activity. Each wagon can be loaded with 8 barrels.

Squire Tomfoolery is caught in a bit of a quandary, as the Smugglers are working for him, but he does not want to expose his involvement in front of HMG witnesses. Therefore he will only take action (either himself or using his bodyguards) against them if neither Strikka nor Master Baihz can see him. He will also not act against the Militia unless they attack him or his men.

The Militia are also in a tricky situation – many of the Smugglers and Wagon Drivers/Labourers are relatives and/or friends of theirs. Whenever a Militia figure is required to fire at one of their opponents, roll 1d6: on a 5-6 they refuse. Sergeant Pinbirdie will attempt to stand behind his troops “directing their fire”, as two of his brothers are in Trechewey's crew...

If they need it, a single light artillery piece from the Gothmog can be used as support for Strikka and his force.

Figures and Other Bits

There are some nice wagon models out there these days – if you don't already have any, then have a look out for the recent mdf kits. Plastic and other barrels are around too. For figures, the Militia are standard Orc Line, while Marines or other more Naval figures would make good Exorcise Orcs. The Smugglers are probably best represented by a mix of Flintloque and fantasy ranges, and either a fantasy Orc chief or a conversion would make a good Squire Tomfoolery.

An Orcs in the Webbe Original! "The High Price of Miruvoré" was written exclusively for OITW's 2012 Advent Calendar and was first published on Monday 17th December 2012.