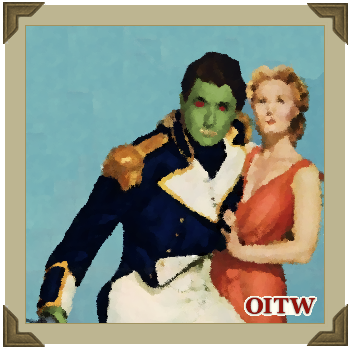 Having evaded Mordred’s clutches for many months, Bette has been betrayed and awaits, imprisoned in the little fishing town of Le Sank Porte, for the guards to take her to a horrendous fate.

All is not lost however. Word has reached Oratio of his love’s plight. As his frigate, HMS Royal Bilge, rides the waves off Le Sank Porte, our Hero joins his marines in the jolly boats below, and strikes out on a daring rescue.

Horny's boats appear anywhere along the northern table edge (the sea). They begin the game with two free turns, then the turn sequence is as normal.

The Guards are a section of Militia status, with a Raw Lieutenant armed with a sword, an Average sergeant, and 10 soldiers (2 Average, 8 Raw) armed with muskets and bayonets.

The initial section can have up to two of its members anywhere on the table. The remaining members are in the tavern. They can only move the turn after the first shot is fired.

Reinforcements - Each turn after the first shot is fired, another Militia section, identical to the first will appear on a roll of 5 or 6 on 1D6. This new section can appear on any street along the southern table edge.

Escaping the Docks - The tide is high, so the only way onto the piers and harbour from the boats is by the steps.

This scenario was originally published on Mike Baumann's excellent Flintloque website Filbanto Stew which has now sadly passed into the West.

It first appeared on Orcs in the Webbe on the 1st December 2007 as part of the 2007 Advent Calendar. It was absent for several years due to a prior regeneration of the website not transferring everything over correctly, the wrong has now been righted and it returned on the 6th August 2014 as part of Orcs in the Webbe's ongoing Flintloque Archive Project.