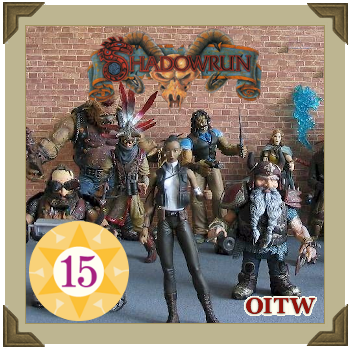 In 2060, the most valuable commodity is information. Individuals with intimate knowledge of biotechnology or cybernetic theory can be a corp’s greatest asset… or greatest threat!

In 2060, the most valuable commodity is information.  Individuals with intimate knowledge of biotechnology or cybernetic theory can be a corp’s greatest asset… or greatest threat!

In this scenario, three teams of shadowrunners meet to battle over an important figure in the scientific community.  Each group was hired for a different job.  Group one was hired by the scientist’s current employer and must protect him at all costs.  Groups two and three were sent by rival corporations, each with a different set of instructions.  Group two must assassinate the scientist, while group three must abduct him and get him off the board alive.

An opposing player can target the template with an attack if he or she chooses. The template uses the body of the runner to whom it is attached as well as any applicable defense dice that the controlling runner wishes to allocate as per the dodge rules. (This represents the bodyguard jumping in the way to protect the important person).  However, any damage from hits is allocated to the scientist, not the bodyguard.

Opposing shadowrunners can also wrest control of the scientist from the bodyguard with a successful opposed skill check (attacker’s yellow / arms vs defender’s arms +dodge).  A successful action causes no damage to the scientist or bodyguard.  Instead, the attacker becomes the scientist’s new bodyguard.  Because this attempt counts as an opposed skill check rather than an attack, alpha team wins ties.  A figure can only make one capture attempt each turn.  Please note, when determining the possible actions for a character’s turn, this action counts as a skill check (as per the advanced rules), not an attack.

How to kill/capture the Scientist?

Assigning 10 clicks of damage to it can kill the scientist.

The Scientist has no dice to defend with and takes full damage from any and all attacks against his person! The Scientist cannot move until another bodyguard has been assigned as per the above rules.

The team which fulfills all of its victory conditions automatically wins the game.  A team can also claim victory if all rivals are killed.

Team one:  The scientist lives through the battle and all opposing group members are eliminated

Team two:  The scientist is killed.

Team three:  The scientist is captured and moved back into the team’s deployment zone

This scenario was created as a three player version of “The Suit,” an excellent shadowrun created by Paladin Genesis.  Much of the content in this scenario was written by him.

"Retrieval" was written way back in 2003 and has been included in the 2019 Advent Calendar with kind permission from the author. It was first published on Orcs in the Webbe on Sunday 15th December 2019.