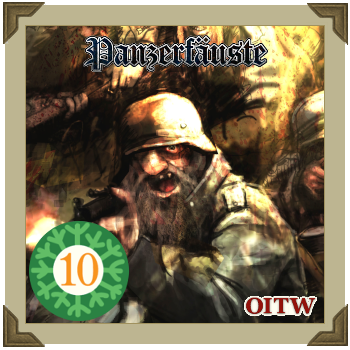 Continuing the cracking tale of Henri the Gnome from Gung-Ho Geeks we present for your reading pleasure...

You can read Parts I and II of Shell Shocked on Costin's excellent Gung-Ho Geeks website here.

Editor's Note: Thanks to the wonders of the amazing Internet Archive you can still read both parts of this tale using the links below:

I'll update the links and this article once things are up and running, but for now click on those links, enjoy the story, and why not drop a few shekels to the Internet Acive, they're a truly wonderful resource that has been working to stop things from being lost for years.

In the single instant it took his eyelids to shut, Henri thought he could see everything that had come to pass for him in his entire life – from the very first time he opened his eyes many years ago up to closing them, just now. Time stopped while faces, events, choices, laughter, sorrow, things, and wants all jumbled together and rolled underneath his eyelids. To his surprise, Henri discovered he had few regrets, if any. Everything he’d done had lead him to a moment when, even though his life was getting cut in its prime, he had managed to both follow his own dreams as well as fulfill his duties to family, friends, and the gnomish people alike. And in that instant, as time quickly sped back up again and he could feel the cold steel headed for his heart, Henri was at peace.

The bayonet cut clean through the bindings around his shoulders and Koffeln was quick to do the same to the ones around his waist. Henri lost all feeling in his legs and dropped to the ground in a sorry, quivering heap. He was lucky enough to keep control of his bladder through it all.

His vision went dark and he could feel tears streaming down his face. Soon enough, he felt himself being picked up and gingerly placed into a chair. He then felt a cold canister in his hands which he could soon hear liquid being poured in. As his eyes readjusted, he saw Koffeln in front of him, filling up a tin cup with what seemed like water. The Hauptmann was talking, but Henri’s heart was booming so loud he couldn’t make any of it out. He soon regained his composure and tried to focus.

‘I’ll need you well and truly with me on this one, do you understand? There are a few others we may be able to pick up along the way and I need you clearheaded and apt if anything is to go sideways, yes?’

Henri felt himself nod, almost out of instinct.

Feebly and without much control over himself, Henri took the cup to his lips but only managed to pour most of the liquid on the front of his shirt. The rest of it he felt burning his tongue and smothering his airways for only a few seconds, but it was so violent and sudden Henri thought it would be the end of him. He felt the burning travel down his gullet and spread to the very tips of his fingers and toes. In that moment, he was sure he could count every hair on his scalp if he wanted to.

‘Much,’ Henri coughed softly and stood up with surprising – to him – ease and certainty.

With that, the dwarf turned on his heels and headed out the door, leaving Henri in a state of perplexed shock. Somehow, though, his legs started moving, slowly at first but faster, following in his captor’s. He could hear the echo of his heavy boots further down the corridor even if he couldn’t make the Hauptmann’s shape out in the darkness. So he walked on, his mind trying to come to terms with what was happening.

‘You’re wondering,’ Koffeln’s voice reverberated from somewhere down the corridor, ‘if this is a trap. I can assure you it most certainly isn’t. Nor will I have a change of heart, if that’s another of your concerns.’

Henri’s mind was hardly put at ease by the Hauptmann’s declarations, but he carried on regardless.

‘You see, mon ami, there comes a time in all of our lives when a definitive choice must be made in the face of unglaublich, wanton destruction – add kindling to the fire burning the Land whole, or lend a hand in putting it out.’

Henri could understand the difficulty Koffeln was having coming to his conclusions. He was wondering if the Hauptmann wasn’t trying to convince himself that what he was doing was right, more than put Henri’s mind at ease over it.

‘Wait there. Please,’ Koffeln more barked than asked, and Henri stopped just behind an intersection.

Light flooded the dank corridor and dwarven salutes were exchanged. From what Henri could gather, Koffeln issued some orders, a cell gate creaked open, and when the Hauptmann fell back into view, he was accompanied by a very familiar face.

‘Henri! What’s going on, par Dun-Nomin, I thought I was a gonner!’

‘The Hauptmann,’ Henri jutted his chin out at Koffeln who was hurrying them along, having them follow again, ‘I think he’s going to help us out!’ ‘Help us?! But… why? How?’

They walked on, mostly in silence, for a good few hundred paces, by Henri’s calculations. They stopped several more times beside various rooms, heard more orders being barked and were then rejoined by more members of the Petit Tonnere. By the time they exited the dungeons via a side passage high above the dwarven encampment, almost two dozen of them were following the Hauptmann whom had grown more and more silent and sullen, with every new escapee. Now in the cool air of the early night, he seemed to diminish under the weight of his decisions. He sat down on the parapet, took off his cap and wiped his sweaty brow, his breath short, a harsh tremble to his exhales.

Henri broke off from his conversation with his comrades and sat down next to Koffeln. For a moment, it felt like there wasn’t even a War happening around them and a regular, silent, starry night was descending upon the Land. And on such a night, a gnome and a dwarf would have been able to stand side by side as… friends?

He glanced at Koffeln and now even more plainly saw the struggle the Hauptmann was going through. In that moment he wasn’t so different from the rest of them: tired, fraught with worry and uncertainty, and a fairly obvious hint of fear gripping him ever tighter. Henri extended his arm towards his counterpart who winced at seeing it, brought back from his musings into a place where the grave situation he would soon have to face was looming. He spared Henri a bitter smile, and clasped his hand in a firm handshake. He locked eyes with Henri, and through the short glance they exchanged, the gnome saw the dwarf yet again asking forgiveness. And through that same glance, he received it.

An airhorn cracked the air in two from the far side of the encampment. The alarm was growing louder and being picked up by posts closer to their current position.

Koffeln stiffened and straightened his back, and his hand jolted into a death grip.

‘Go,’ Koffeln ended the handshake and pointed towards the North, where the trenches and fortifications loomed in the distance, a sprawling swamp of death and darkness that they would have to wade through to escape.

‘Keep left of the Panzer-pens and you should be safe. There is a small, guards’ spare munitions shed not far past that, you should be able to better equip yourselves for…’ he trailed off.

He clicked his heels and nodded at the group of former prisoners who gave him feeble, grudging salutes. The Hauptmann then pulled out his bayonet and his handgun, weighing them out for a long moment, turned back and left across the field, straight towards the sounds of now growing commotion and unrest.

‘You heard him,’ Henri told the others, ‘lead us on, Corporal!’

‘Y-yes,’ Barise composed himself, ‘onwards and outwards, mes amis! Time to head out of this hellhole!’ he started North at a measured gait and all others fell in line behind him, with Henri picking up the pace and joining him at the front.

‘You think,’ Barise started in a hushed tone, ‘we’ll ever see that officer again?’ Henri barely took a moment to answer simply, ‘No.’

‘Good. After those dungeons, I’ll never be able to even look at a beardie again if it’s not down crosshairs… To willingly do these things to another being of the Land… unforgivable.’

Henri pondered things for a while and then sighed, ‘Nobody does anything willingly in this War, Corporal. Now come, let’s put yesterday behind us and find our tomorrow!’

An Orcs in the Webbe Exclusive! This short story continuing Gung-Ho Geeks' Shell-Shocked storyline was first published on the 10th December 2020 as part of Orcs in the Webbe 2020 Advent Calendar as an online exclusive.