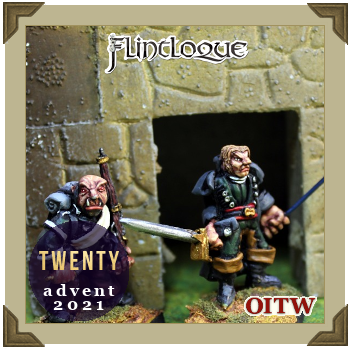 Sharke's Ryfleorcs have arrived just in to take part in a two-fronted attack on villa used by the Farternety, a secret organisation within the Ferach Armee which had the goal of murdering the Duke of Wheeling-Turn...

Captain Sharke has used a tunnel to sneak under and into the villa being used by the Farternety, a secret organisation within the Ferach Armee which had the goal of murdering the Duke of Wheeling-Turn. His group of Orcs have arrived just in time at dawn for the two front attack upon the villa. Can the Orcs with Goblin aid carry the day or will the Elves of Colonel Gerri Lanyard use the cowardice of Captain Churlie Morrorc to gain victory?

Please note you should play the micro scenario "Sharke's Assaying - The Tunnel" found here on Orcs on the Webbe as it does influence this bigger action by its result.

“Quietly Padrag, easy does it. Nice and slow.”

The huge Bog Orc sergeant tensed the muscles in his shoulders and back and pulled slowly and surely. With the barest hint of a pop the iron hinges, already loosened by Rifleorc Koopa's blade, came away from the door. The sun was rising outside the villa and with the door removed the Orcs could sneak out and surprise the pointy eared sods. Harpy held the door and then turned and placed it down with a crunch on the back of a dead Elf private. Sharke tensed at the sound but all was quiet outside aside from muffled voices from the other side of the stone building.

“Now lads when I say we round the corner and give them a kiss from bessie.”

Despite their size the Rifleorcs moved silently and the red coated Orcs followed them doing their best to make no sound. They reached the edge of the villa and Rifleorc Tunge looked round the corner and then hurriedly pulled his head back.

“Mr Sharke by Sentinal there must be a 'undred' of them there. All looking the other way”.

Sharke smiled showing a broken tusk. This was going to work.

Off in the distance there was a shot then another and then a dozen. The attack had begun.

“Don't bugger this up Churlie or I'll take yer ears myself.”

This full sized scenario is set in the War for Catalucia setting for Flintloque and you must possess a 3rd edition game book and be familiar with the game mechanics. The objectives in this scenario are different for the two sides plus one random event as well for added fun!

The Grand Alliance Playing as this side in the scenario your objective is to wrestle control of the villa from the enemy with your two sections without losing more than 50% of your troops.

The Ferach Empire Playing as this side in the scenario you are a defender who has numerical superiority but has just found out the enemy are not only to your fore but also your rear! To win you must force the foe out of the grounds of the villa (see special rules) for one full turn. Your casualties do not factor in. 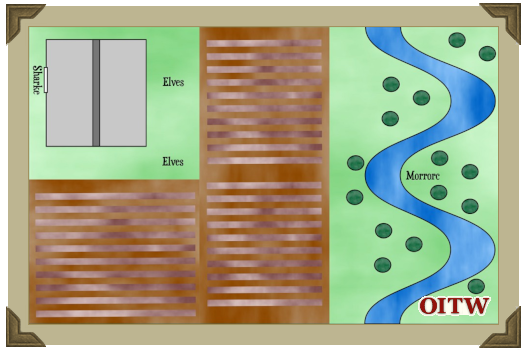 The scenario takes place on a rectangular playing area which is standard size of four feet (120cm) by six feet (180cm) which is best suited to a flat table. This scenario takes place in two areas these being the villa and its grounds at one end of the table and the other is wooded with a stream flowing through it. See the map. The villa is 30cm wide and 20cm deep and cannot be entered during play. The ground is clear and good going except for normal rules for movement through water and the rows of vines which cannot be pushed though only walked along (see special rules). There are two dozen trees which players take turns placing 5cm apart with none inside the bounds of the villa. While we do not expect you to match up your terrain exactly to the map and the instructions please do try to get as close as you can to the guide given. Players should agree upon playing area set up before play commences with the first turn. Setting up your miniatures for this scenario is as follows.

The Grand Alliance section containing Sharke sets up at the rear of the villa at its back door within 2cm of each other. The other section commanded by Morrorc sets up at the stream within 2cm of each other. Sharkes section contains the characters who survived 'the tunnel' micro scenario meaning a maximum of fourteen miniatures all of whom are Orcs and you should use the 5109 Sharkes Chosen free insert for special rules for the named characters. Churlie Morrorc's section is composed of himself (Albion Orc, Regular, Raw) armed with a sword and standard pistol (see special rules) as well as three regular and average Albion Orc light infantry soldiers armed with Bessie Musket and Bayonet. Ten Goblin Line are under his command as well create them using 5025 War in Catalucia and give them typical experience levels. Arm them and use named personalities as per the Uniformation Article from our website for the 18th Foot.

The Ferach Army two sections of characters set up apart at least 15cm but within 2cm of each other on the boundary of the villa grounds facing the woods and the attacking Orcs and Goblins section. Each section is composed of twenty Ferach Elves. Create these using 5025 War in Catalucia with normal spread of experience levels with all being regular and armed with a Standard Musket. None may be veterans however but you can give two characters in each section a sword. Nominate one Elf to lead section two but section one is led by Colonel Gerri Lanyard who counts as one of the twenty as follows. He is a Ferach Elf of Legendary experience level and is elite as well. He is armed with a duelling sword and two standard pistols.

This scenario is not time dependant meaning no turn limit imposed upon play. There will be as many turns as needed. The scenario ends if one side or the other has obvious total victory or total defeat. At the end of the game refer to the victory conditions to decide a winner of the game.

The present conditions of this scenario are as follows. During the whole time of this scenario it is during the day in early morning. The weather is dry and there is no rain. Refer to the Scenario Special Conditions for this scenario for any rules mechanics that deviate from those found in Flintloque 3rd edition game books.

Almost all Flintloque scenarios go a little beyond the normal game play mechanics and these are known as Scenario Special Conditions. In this part of the scenario all of the unique or adapted mechanics to be used in this scenario are presented. You must implement the mechanics here alongside those in the game book and expansion book that apply. Where they overlap the mechanics of the scenario take president position. As always use common sense and if in doubt toss a coin…a Kyng’s Shilling of course!

The Vines: The villa brews up a horrid red wine for which it is rights famous. The grapes grow in long rows of vines each of which is separate by 5cm between them. The vines are so thick and thorny that no character can move through them, only along them. On the plus side they are so thick that any musket or pistol shot will be stopped by them not reaching a target. Vines are 1cm thick.

Captain Morrorc's Cowardice: Sharke hates Morrorc for having him flogged at the hands of Sergeant Hogswill (before the Deserter Army) and has made it plain that given the chance he will kill and perhaps eat the coward. As a result Morrorc does not want to aid in the attack through a combination of fear of action and hoping that an Elvish bullet will do for Sharke removing his problem. In play Captain Churlie Morrorc will advance only to 10cm from the edge of the villa grounds and no further. His troops want to aid their fellows but will not disobey an order...for a time. Each turn one more character under his command will want to attack the villa grounds. Once 50% of the living section (dead character are removed from the count) has this want they will advance without their officer. At this point Morrorc will follow along at their rear.

The Challenge: If Captain Sharke gets within 10cm of Colonel Lanyard he may shout a challenge which the Elf will accept without hesitation. All other action ceases and the two characters will have a sword duel. The winner of this wins the scenario as the defeated force will no longer fight on.

Lanyard's Courage: During play the Elf player may use the awesome aura of the 'Hero of Maulango' to commit one act at a time of their choosing. This act is to re-roll one attack. It may be Lanyard or an Elf under his command for a melee attack or ranged attack.

It is assumed that you will be playing the part of the Grand Alliance in this scenario and as such the solo play parameters will apply only to the Ferach Army sections. Use solo player parameter DEFENSIVE for the Elves and they will prioritise ranged combat over melee. Upon being fired upon from the rear one of their sections will turn to face Sharke's Orcs. Lanyard will remain in their midst and avoid a personal challenge with Captain Sharke. The Elves will not leave the villa grounds for any reason.

As outlined in the rest of the scenario this is a full sized game of Flintloque and requires a fair number of miniatures. We recommend 5025 War in Catalucia for the game rules as well as the named free articles. You will need characters from 5109 Sharkes Chosen as well as 54503 Orc Line and 53513 18th Al-Garvey Foot. Two full units of 51504 Elf Line or 51519 Elf Line Catalucia giving forty miniatures and we used 51052 Lucius Malsovin for Colonel Lanyard. The terrain was scratch built.

This scenario was inspired by the final battle in Sharpes Prey by Bernard Cornwell which in 2021 was the newest title in the excellent series of novels. It has been simplified for a faster playing large game. Balancing the forces took several attempts and during testing Sharke came near to being wiped out due to the Goblins being held back in early turns. If you are going to play this scenario with friends or alone I suggest keeping the Orcs far away from the Elves until Morrorc is overruled by his troops. The Elves have the advantage in firelocks after all. If you want to liven the scenario up then add back in something I took out. Using 5027 Grapeshotte give Sharke a rocket platform with three gunners and give the Elves two 4lb cannon with four gunners each. My thanks for Craig for letting me write and play this fun adventure for the Advent Calendar.