"Wear Them to Pieces"

A Flintloque Scenario by David Martel 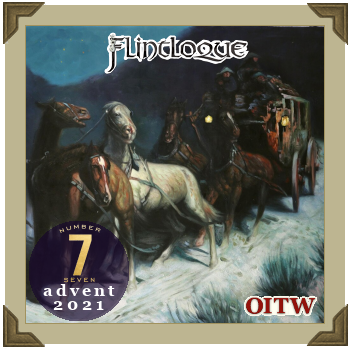 Image from 'A Taint On The Wind' by Frederic Remington*

A coach carrying four Orc ladies to a ball at Needham Manor has been ambushed by a peculiarly determined pack of roaming undead. However the lifeless abominations have taken on a little more than they bargaining for as Lady Elizabeth and her friends are far from helpless.

Ladies Elizabeth, Jane, Lucy and Kitty are on the way to a ball at Needham Manor. Due to the presence of the roaming undead a small contingent of soldiers have been dispatched to ensure that the ladies arrive on time. Whilst travelling upon the road to Needham the coach driver is shocked to discover that the road is blocked by a fallen tree and the aforementioned roaming undead are now blocking the way forward.

This is clearly unacceptable and the living dead must be moved out of the way in time for the ladies to attend the reception.

Eight Orc Troops plus an Officer

Thirty Zombies, six of which are armed with muskets.

Miss Jane
A Professional Veteran Officer.
Her stats are otherwise the same as Elizabeth.

Lucy and Kitty
Professional Experienced Officers
The younger sisters are less skilled in the deadly arts. They have the skills of Brawler, Interrupt Fire and Dodge.

One Cowardly Average officer armed with musket, sword and pistol.

Undead zombies have the same stats as whatever race you are using but allows count as being heavily wounded for movement purposes. They suffer -2 to I and -1 in hand to hand. Shooting is at one column shift to the right. They do gain a +2 to steady and two extra wounds.

Editor's Note on the Undead

When this scenario was first published in 2009 Death in the Snow had not yet been released. Upon release in 2010 it brought with it fantastic rules including the need for Liches, Savant Undead and the Dread system. You can create a few sections of Undead using the rules in that book (DITS, p.42) and follow the rules for Undead in Solo play (DITS, p.90).

The living player must ensure that the Ladies are able to attend the ball. To attend the ball the ladies must move off the table edge via the road or either two of the footpaths.

The Road Block: The tree must be moved before the carriage can get through. This requires three soldiers to spend one turn shifting it.

Suitable Attire: The ladies intend to visit for the purposes of attending to a ball. To reflect this each lady starts the game with a costume rating of 10. Should they engage in combat it is probable that their dresses will become damaged or torn. Whilst a certain amount of discord might be allowed standards have to be maintained and should the ladies arrive improperly dressed they will be turned away.

The following could cause a loss of dress standards:

The Zombie player starts with his four undead at the Roadblock plus another eight which he may deploy anywhere with his half of the board.

At the beginning of his turn reinforcements may arrive depending upon the level of noise. Roll 1d10 for each musket fired last turn. On a one to five nothing happens, six to nine one zombie turns up, on a ten two turn up. Reinforcements may be place anywhere within one inch of the table edges of the zombie players half of the table,

The living player wins if they manage to get three ladies, with not less than eighteen points of attire between them, off the zombies table edge. Any lady arriving on foot, either via the road or the footpath, automatically looses one point of Attire sloshing through the mud.

The ladies should be capable of kicking the c**p out of the zombies by themselves but if they do then they will ruin their ballgowns. As the living player you should expend the troops with merciless disinterest as their survival is secondary to preserving a clean frock.

The above scenario was originally published on the sadly now defunct Notables Yahoo Group on the 24th August 2009.

It was first published on Orcs in the Webbe on the 7th December 2021 as an entry in that year's Advent Calendar and, of course, part of Orcs in the Webbe's ongoing Flintloque Archive Project.

Originally it did not have a name but I slightly tweaked a quote from Pride and Predjudice, on which the 'undead enhanced' "...and Zombies" version this scenario is based on.

* Note that the image has been used without permission and will be removed if requested by the copyright holder.