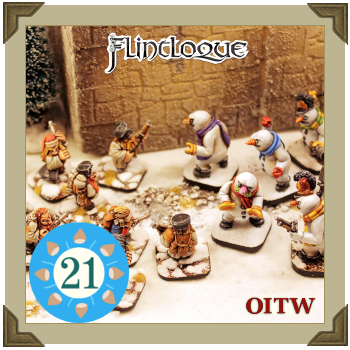 A platoon of Finklestein Dwarves near starvation have discovered something sinister deep within the Witchlands that has all the hallmarks of one of Doctorov's laboratories. What will they find within...

A platoon of Finklestein Dwarves has reached the end of their rope. Near starvation they have bet it all on a desperate raid. What they took to be a depot, a storehouse containing grain, salt beef or other edibles is in fact something rather more sinister. It is a manufacturey of the frosty dead where Doctorov has stored animated Snowmen... a lot of them. Will the Dwarves get to eat? Or will they eat only snow? 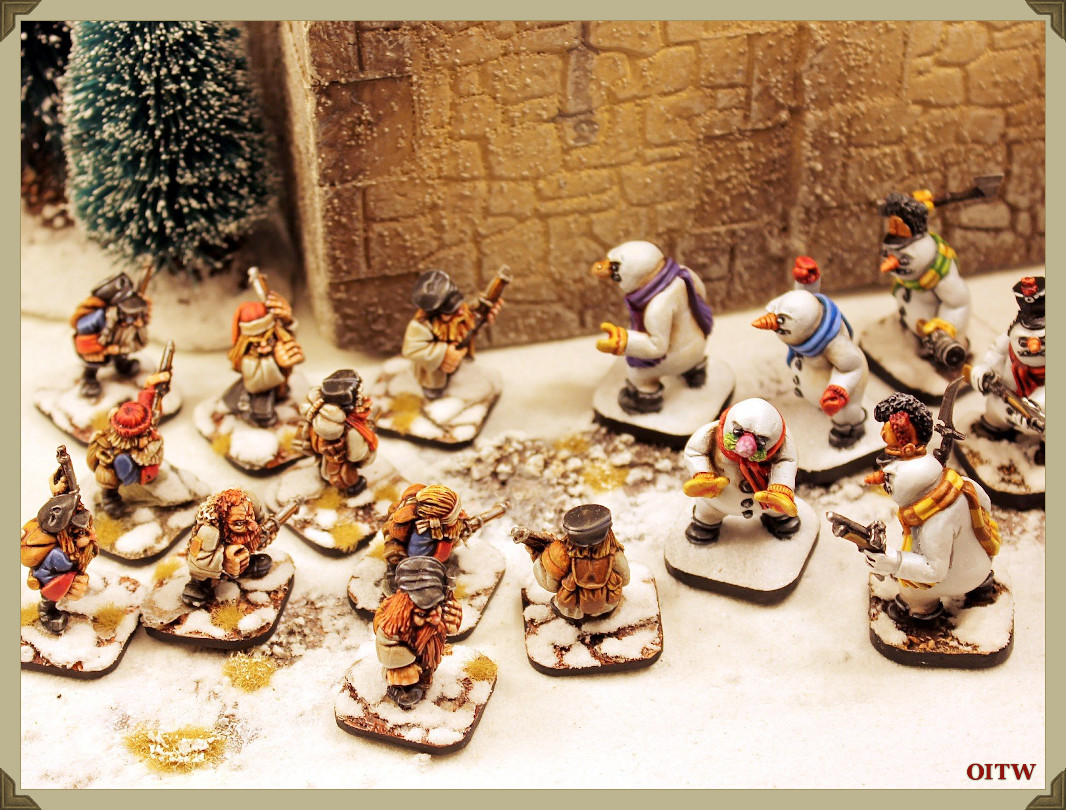 Klaus had never been wounded; not badly. He had been winged by a musket ball and suffered from the cold of course but these were as nothing compared to the hunger in his belly. Food. Food was all he wanted. His mind fixated upon it and taunted him with imagined flavours of roasted meat and thick crusted bread. The rest of the soldats in his platoon were as he was officers too. Snow was all there was to see and while thirst was never going to be a challenge in the hated Witchlands there were no fields and no animals roamed. Only death ruled here.

From the hard packed snow of the road the Dwarves had spotted a far distant structure and desperate they had convinced themselves it was a depot containing all manner of delights. Thousands trudged onwards wary always of the Zombiski Cossacks just out of sight but his platoon had peeled off and made for the grey stone barn. It had looked intact and they had even passed several empty wagons. How foolish to leave the Armee. How foolish to imagine the Undead had left anything for them. As they reached the imposing building hope still remained but it was dashed soon enough.

Muskets levelled in hands made blue by the cold and weak from hunger they neared the big door and then it opened and out came..things. Not Zombies, not Skeletons or Ghouls but something else. Walking snow with large fists or carrying muskets and pistols. Shock gave way to training and a volley blasted out felling several of these 'Snowmen'. This was no depot but in turning the Dwarves realised they were stuck between an emerging force and a returning one coming from behind them.

Klaus rammed the ball into his short musket and knew there would be nothing to eat but snow this day. 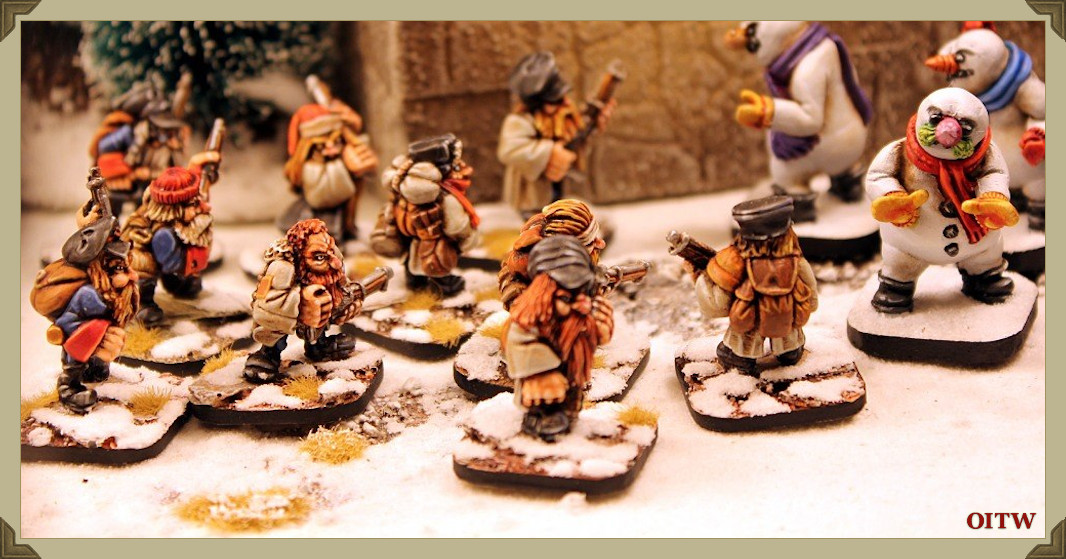 Welcome to this full sized battle level scenario! It features two large sections and it is an 'escape type of adventure' for the Dwarves. As always please make use of a game book notably 5026 Death in the Snow plus you will need an additional free PDF detailed later. Note that the objectives of this Flintloque scenario are simple but there are exotic rules during play.

The Ferach Empire
Playing as this side in the scenario your objective is react to being attacked and then to leave the playing area as outlined. If half your section makes it out of the playing area you have won. There is no turn limit on this scenario.

The Witchlands Army
Frozen water animated to unlife you are in the thrall of The Dark Czar and must attack regardless of losses to wipe out the mortals. If you manage to kill more than half of the enemy section then you have won. If not you have lost. 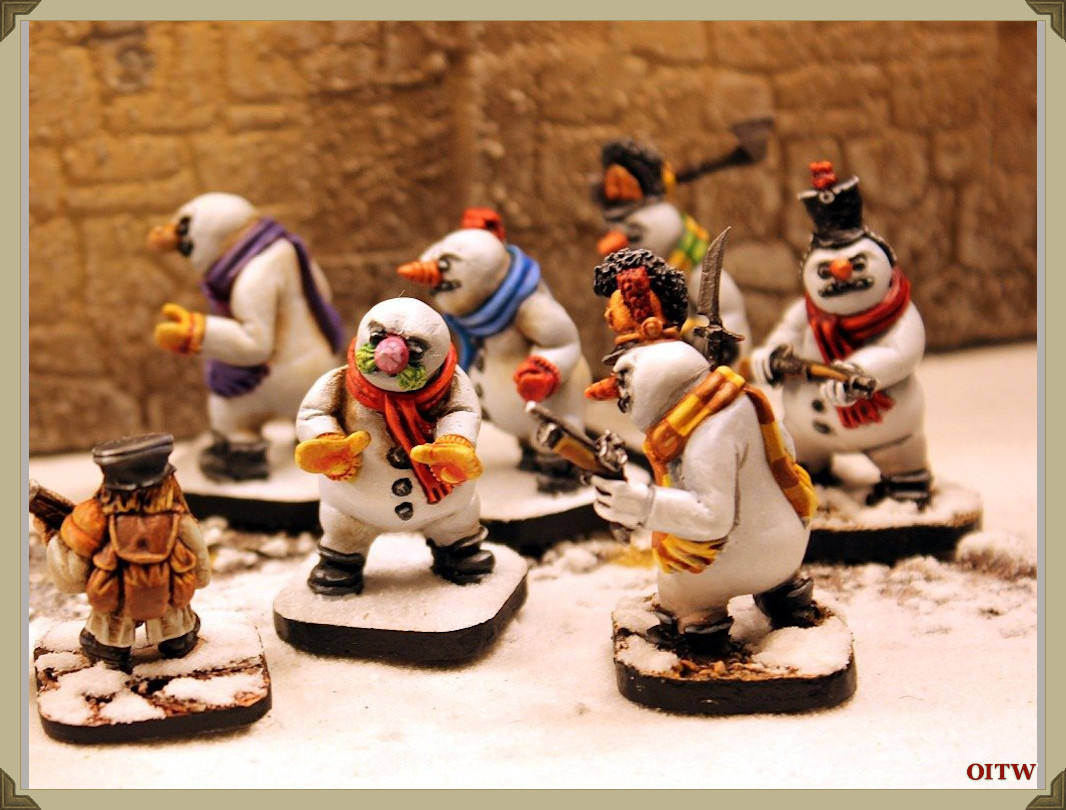 The Set Up and Game Conditions

The scenario takes place on a rectangular playing area which is standard size of four feet (120cm) by four feet (120cm) which is best suited to a flat table. This scenario takes places on a field of hard packed snow which counts as Clear for movement. The playing area is laid out with a large stone building (30cm long, 25mm wide) placed 30cm in from the northern edge of the playing area. There are ten randomly scattered groups of four dead trees (each group is within 10cm of each other) and no group within 15cm of another. There are three broken down wagons and four skeletal horses 20cm in from the southern edge of the playing area. There is no other terrain upon the snow in this desolate place. While we do not expect you to match up your terrain exactly to the instructions please do try to get as close as you can to the guide given and the simple map. Players should agree upon playing area set up before play commences with the first turn. 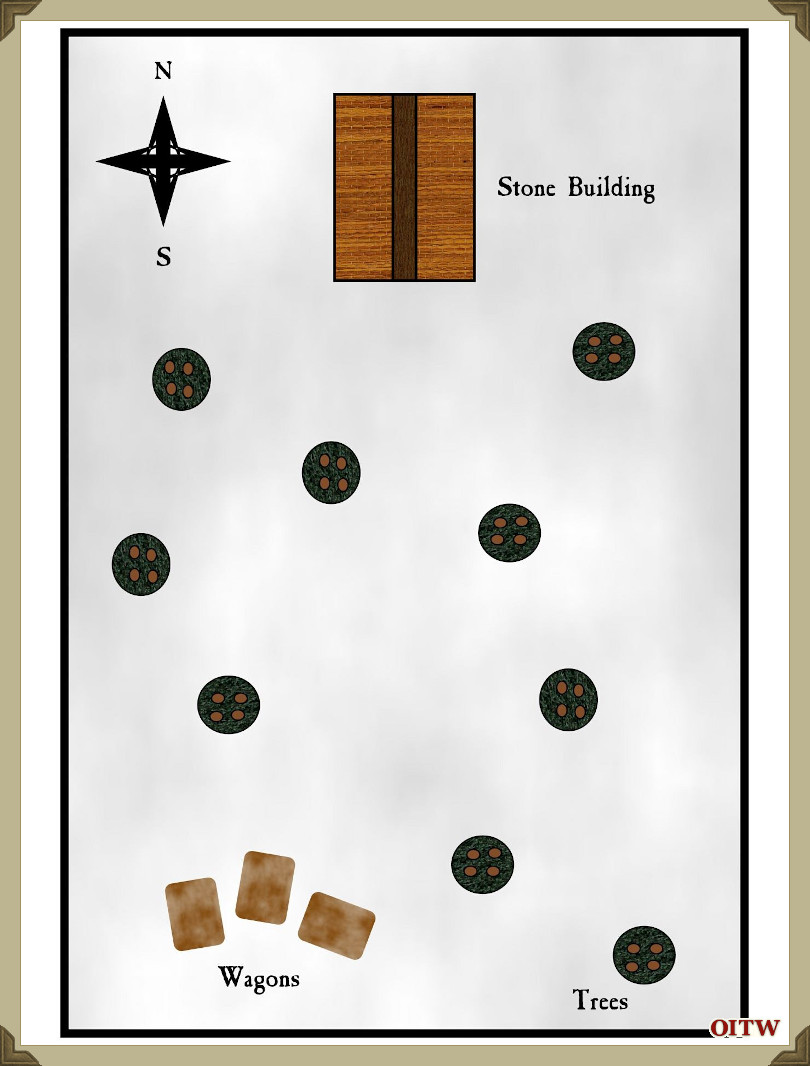 Setting up your miniatures for this scenario is as follows.

The Ferach section of characters is a made up of twenty Finklestein Dwarves. Create these characters using 5026 Death in Snow with typical spread of experience level. They are all regular status and are armed with Dwarf Musket MkII with a few having swords and a few standard pistols. The section sets up within 5cm of each other and 5cm from the southern wall of the large stone building.

The Witchlands Army section of characters is composed of Snowmen with a total of twenty four Undead plus one mortal character Duc de Tubercule. The section is split into two halves with one group of twelve placed within 5cm of each other and 10cm of the broken down wagons. The other half of the section which also has Tubercule attached is placed within 5cm of each other and 5cm from the northern wall of the large stone building. Half of the Snowmen are armed with a musket or standard pistol or standard blunderbuss and the other half are unarmed and they should be mixed.

This scenario is not time dependant and that means that there is no turn limit imposed upon play. The scenario continues until one side achieves its stated objectives at which point it ends in that turn. At the end of the game refer to the victory conditions to decide a winner of the game. The present conditions of this scenario are as follows. During the whole time of this scenario it is evening time with enough light to see. The weather is freezing but dry and there is no rain. Refer to the Scenario Special Conditions for this scenario for any rules mechanics that deviate from those found in Flintloque 3rd edition game books.

Almost all Flintloque scenarios go a little beyond the normal game play mechanics and these are known as Scenario Special Conditions. In this part of the scenario all of the unique or adapted mechanics to be used in this scenario are presented. You must implement the mechanics here alongside those in the game books. Where they overlap the mechanics of this scenario take president position. As always use common sense and if in doubt toss a coin…a Kyng’s Shilling of course!

Hunger Pangs: The Dwarves are very hungry and have not eaten for several days. The retreating Grande Armee has stripped the barren landscape of everything edible including limber, pack and cavalry mounts! As a result of this each time a Dwarf activates roll 1D10 and on a result of 1 that character cannot do anything but defend themselves in melee or reload a firelock due to temporary weakness from hunger. If a Dwarf is thus affected by hunger they DO NOT make the roll in their next two turns (mark this on the playing area or roster) so that they will not be constantly stunted by pangs.

Snowmen in Play: Alternative Armies has a free digital download containing game rules in Flintloque for Snowmen. You will need it for this scenario. It is hosted on our web server. Download it by clicking HERE.

Duc de Tubercule in Play: This unique character has a uniformation article which contains his game rules for Flintloque. You will need this for the scenario. It is hosted on our web server. Download it by clicking HERE. 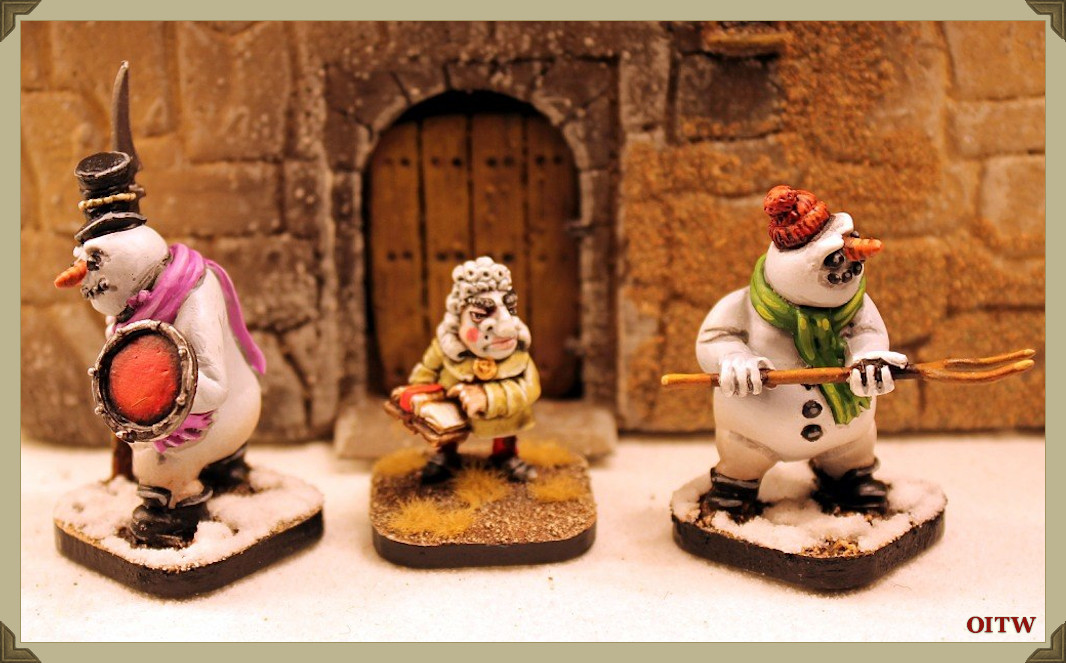 Newly packed Snow: The manufactory is only just up and running and some of the Snowmen it has made are a bit unstable. Not hard enough packed as it were. Each time a Snowman fights in close combat for the first time they may just disintegrate from the shock of impacts. If the Dwarf wins the melee round then roll 1D10 and on a 1-4 the Snowman collapses and is 'killed'.

This scenario should only be played with the silent player taking the part of the Snowmen. The Human player is the Ferach Empire. As play commences and Snowmen are put into the game they will act according to a simple goal. Each turn they will attempt to rush into close combat with the nearest mortal character. If they possess a firelock they will use it when 15cm or less from an enemy and they will not reload the weapon. A sole objective is the eradication of the mortals. Both groups of the dead will close upon the mortals. Tubercule will attempt to aid the nearest Snowman and will not move within 15cm of a Dwarf if able.

Optional Expansion of this Scenario

This scenario is flexible and so it gives players the option and choice to make the scenario more of a challenge. Note this should only be done once you are familiar with the scenario and desire it to be tougher. Remember this will alter the balance of the adventure so be wary!

During play testing I noted that the Snowmen have the edge on the Dwarves in terms of movement and in numbers but not in firepower. You can begin the adventure by moving the Dwarves 20cm from the stone building giving them an advantage. Or you can level the firepower of the Undead by giving them four Savant Zombies armed with standard muskets acting as a guard detail for Tubercule (use the Zombies from 5024 for these).

What are the Miniatures in this Scenario?

If you wish to play this scenario with the same models used by the author then here is what was deployed. We used 5026 Death in the Snow for game rules plus a full unit of 52505 Finklestein Line Witchlands (20 figures) plus 55026 Duc de Tubercule and two value sets of Snowmen these being SN09 Snowmen (12 figures) and SN08 Black Powder Snowmen (12 figures). The building was a piece of scratch built scenics as were the trees.

Those in the know will be aware that on top of everything else that has made 2020 an awful year I also badly hurt my right arm which made typing very painful after a while for several months. I am over that now but it did mean that for the entire summer I did not write more than a blog post. This scenario was, along with 'Seeking Stalinov' my return to the World of Valon in November 2020. I played the scenario three times and all three times the Dwarves managed to escape, twice winning and once losing due to casualties. As it is an escape type adventure the aim for the Dwarves is to get out of dodge but as always with Flintloque do you move or do you fire and reload? I opted for movement more than firing with about seven of the Finklesteiners covering the retreat and the rest hammering into the blocking Snowmen coming from the carts. I hope you enjoy the scenario and as always I welcome feedback and would love to hear how you get on with this years offering to Orcs in the Webbe.