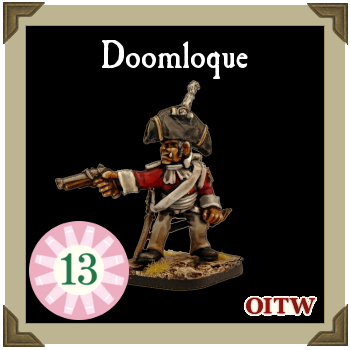 Doom Squad is a solo play set of rules for special forces warfare..it covers 300 years of history including the Napoleonic Wars.

I wonder if I can use my Flintloque miniatures with it?

Major Dunknowit passed the battered brass telescope back to Captain Sharke. A long rifle shot away the pointy ears were busy getting a wheel changed on a wagon which had shattered on the well rutted dirt track in the valley. Behind the Major were a dozen Rifleorcs in the green jackets of the 105th regiment. Their uniforms were faded and patched and their faces and tusks were dirty but their firelocks were spotlessly clean and well maintained. They had been on the march for four days to get ahead of this procession of thirty wagons. Exploring officers had let it be known that among the Elves and their prisoners was a spy. This spy was heading back to the imperial court in Lyonesse carrying intelligence concerning the size and dispositions of Wheeling-Turn's army. That could not be allowed.

“Well Sharke. Seems we caught the Parleyvouz in time. It will be dusk soon and my tin is on the eighth wagon from the fore of this column. I doubt the rascals will press on further this day. Give it a short duration and then we go down there and see if we can't collect some ears eh. Remember we want the papers first and the Crappo second.”

The sun sank lower and as predicted Armorican soldiers began to leave their stopped wagons and look for brush and wood to start some fire for cooking. Carefully four Orcs rose over the lip of the valley and were nearly invisible in the dying light as they crept forward. Their weapons were primed and secured and every loose article on their persons had been removed or tied down to make them as silent as possible. They were out numbered a hundred to one but they were confident. After all unlike these worn outs they were Rifleorcs. The spy was as good as gutted.

Steve Danes the author of Doom Squad is a talented chap and when he turned his hand to writing a solo play set of rules concerning itself with special forces action across three hundred years of military history Alternative Armies was glad to act as publisher to get the book out into the world. Doom Squad uses six sided dice and a 'target marker' game mechanic to give a tense and enjoyable wargame for one player using any miniatures they might have in most scales including 15mm and 28mm scales.

During the testing of the Doom Squad rules I had the opportunity to try out the game over several weekends (most of the time Sunday is my time to play a game or two) and I was really impressed. Since I do not play Modern Warfare nor World War Two I chose to set my play in the Napoleonic period of the rules. I used my own Flintloque miniatures...what else would you expect from me...and it got me thinking. So I made a note and filed it away until it was time for the Orcs in the Webbe Advent Calendar. This short article is the result. Can you play Doom Squad with red coated Orcs and blue coated Elves rather than with soldiers of the real world?

The first thing that must be pointed out is that you will need a copy of Doom Squad in print or digital download. Beyond this you will need to print out target markers from the 'Jager' period of the rules. You will need your regular terrain and playing area and your Flintloque miniatures. All games of Doom Squad on the World of Valon make use of the earliest time period in the rule book which is titled 'Jager' and can be found on page 16 and then on page 24.

I am assuming you are playing with mortal creatures not the Undead. You create your Doom Squad team as normal with four miniatures selecting a Leader or Marksman and so forth if you wish. This game works best if you use elite skirmisher miniatures such as 105th Foot Rifleorcs, Elf Carabiniers, Dwaf Jagers and so forth; the kind of troops an army uses for sneaky or difficult missions. Consult the weapons table and convert the wider array of Flintloque firelocks into pistols, muskets, carbines and so forth. Set up the mission and choose a formation for your team. Most Flintloque scenarios will give a clue to a possible sharp solo Doom Squad mission with the number of figures reduced by about half. Play the game as normal except for the following changes due to the different fantasy races of Flintloque.

Ogres, Bog Orcs, Big Todoroni, Werewolves and other significantly bigger and stronger races are slower but tougher than normal. They have a movement of THREE per action rather than FOUR. If they are enemy then their movement reduces to FIVE from SIX. They also have an extra dice roll when determining the effect of a KILL result of enemy action. They may make the roll twice and choose the better of the two rolls reflecting their increased stamina.

Dwarves, Goblins and other less than Human sized races are in Dom Squad a bit more fleet footed but lack the same power as bigger creatures. They have a movement of FIVE rather than FOUR per action. If they are enemy then their movement increases to SEVEN from SIX. However when they make the dice roll for the effect of a KILL result they must deduct -1 to the result making death and injury a certainty rather than escaping merely suppressed.

The Trolka are a special case. These huge creatures are so big that they present a problem in the rules of Doom Squad bring some twelve to fifteen feet in height and carrying firelocks so big they are 2lb cannons rather than muskets. I worked on several angles of putting them on the table but eventually settled on this method. Trolka are VEHICLES. Treat them as vehicles in the game rules with a Vehicle Strength of FIVE. They carry a firelock which is treated as Jager period Artillery. They act as vehicles being so large. A Doom Squad Team of Trolka may only be two miniatures in size and the same for enemy placement with target markers.

All of the extra equipment and command skills and so forth apply as normal in play. Aside from the changes outlined the game engine will work just fine for Valon.

The Undead in Doom Squad

So you are not in Catalucia nor in Central Urop and instead you are in the Witchlands and wish to include the Undead in your games. The shambling non living are better suited to being the enemy of your Grande Armee special forces and in that case they perform as normal in play except that they may never be Suppressed. Ignore those rolled results and this reflects their ability to absorb punishment too. They are active and fine or killed (again!) by attacks upon them. But if you want to create a Doom Squad Team of Zombies or Skeletons you can!

The Undead are not best suited to special forces actions and as a result they may select a team of EIGHT figures rather than FOUR. They act as normal except that they get only ONE action per turn rather than TWO. They cannot be suppressed and ignore rolled results for that state.

Another key difference is the presence of Vampyres in Doom Squad. In Flintloque a Vampyre is a deadly opponent (you do not want to get on the wrong side of Lady Wintermore!). If you elect to have a Vampyre then there may only be ONE in your team and you may have NO other miniatures in that team. Select a type you wish such as Scout or Marksman and arm the Vampyre. In play this miniature gets FOUR actions per turn and must be killed THREE TIMES; when the first and second kill results are rolled for they are recorded and play continues. If you want to give yourself a scare then elect to make one Target Marker placed on the table an enemy Vampyre and play it as outlined when revealed. These blood suckers prefer swords to firelocks but they may have a pistol too.

In the Wider World of Valon

There are wargamers who have sizable collections of Flintloque miniatures and may be seeking a wee change to typical play and I can whole heartedly recommend Doom Squad and this article for them. The game copes with the fantasy aspects very well and the above additional rules are all you need to join the fray. Night actions are especially fun. So if you want to play solo and make it tense and tight this is for you.

I hope you enjoyed this crossover entry into the Advent Calendar.