In a patch of Valon known as 'the Glums'
people have been going missing.
Austin Powys has been heading that way
for he's been reminiscing
Of lost loves, old gods, and the season of the mist,
(It's hard to remember everything as he was mostly pissed...)
There was, at least, a girl or five he'd like to see again
So he set off through the wind and the rain,
But the rain soon turned to snow
So heavy was the blizzard that he nearly didn't Go!
But he thought of Esmeralda, Fifi, and of Collette
And of the warmest welcome that he was sure to get.

On approaching the Glums, a long way uphill,
Austin grew concerned, nothing stirred, all still...
This was the week before Cryptmass, there should be lights up in the street
Wine, women, song, lots of things to eat.

This place was dull and quiet, you'd think it a town in mourning
But then our hero espies an old man by a pub, discreetly yawning.

With a look of recognition Austin is taken inside,
Into a once happy Inn, where business used to thrive,
There are few drinkers, some Ferach and an orc
Nothing much was going down and all heard the talk...

"Mr Powys, I'm glad you're here,
For we have not done well,
And Cryptmass has been cancelled
By that damned Cromfell.

He's s cold Orc, sir, with no warmth,
in his heart just gloaming,
The folk here in the Glums
Have called him the greatest Snowman.

He's got soldiers patrolling the streets,
Breaking up any little feasts
You may not sing or joke,
He's a really moody bloke!

He's locked up all the girls,
Not for sordid reason
But they're so happy and jolly
They bring joy to the season!

If you could free them
And set them upon Cromfell
I'm sure their charms would melt
his Frozen heart from hell."

Arising from a nearby by table were three grizzled Ferach selves,
"We will help you Austin, for we are Cryptmass Elves," (I thank you!)

From the window to the street Austin could see his quest,
Free the girls, capture Cromfell,
Let the ladies do the rest...

The soldiers guarding the village
Had a semi formal route,
But there may be a point
Where they would stop and shoot
A look through a door or raise a light
And insist on a silent night.

There at the top of the street
By a memorial to the War
There stood that damned Cromfell
Standing by his door.

Austin and the Cryptmass Elves

Start in a tavern at one end of the Village.

The Elves are veteran Ferach troops. They are armed with pistols and cudgels.

Rekhardt Cromfell is a Warty veteran orc armed with a rifle and Sabre.

The number of soldiers may vary according to required difficulty. The recommended amount is four for a level game.

Esmeralda, Fifi and Colette, are held in three separate houses in differing locations in the village. However, these are easy to identify as the windows have been barred.

Again, the number of ladies may vary according to required difficulty. Once free the move to the middle of the village and begin to sing songs of Cryptmass cheer.

I recommend using one of Heroic Maps excellent map layouts for this adventure, Houndsgrove Village, It is available to buy from Wargame Vault. It can be printed out or used in your favourite virtual tabletop software. 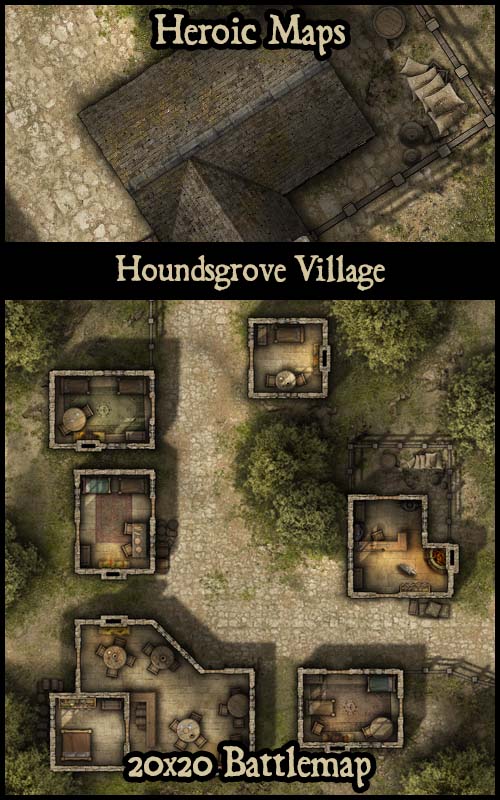 For Cromfell to win, and only if not played as a solo game, he must defeat and put a stop to Powys' meddling.

A minor victory is killing Austin and the Elves.

A major victory sees Austin being captured and imprisoned and spending Cryptmass being thoroughly miserable.

For Austin to win he could just kill Cromfell and his men, and that would be a minor victory.

To achieve a major victory Cromfell must be beaten in physical combat eg. Grappled and dragged to the rescued villagers singing in the Square.

He is there plied with wine, food and goodwill. In the song of Cryptmass Carols Cromfell learns that mercy is the. Greatest of the virtues alongside wine and good company.