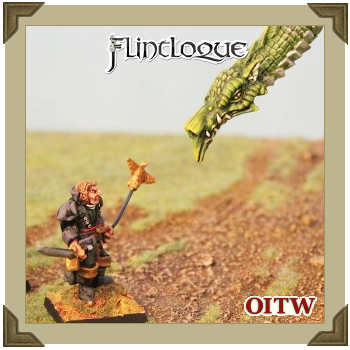 A tale of a perilous bird hunt...
or
Using The Wyvern Kildane in Flintloque

The crudely made wooden door of the sole taverna in the village of Los Parabolos screeched on its rusty hinges every single time it was opened.  It had been opened a dozen times since the small group of Rifleorcs had made their own entrance an hour earlier and it was giving Captain Rekhardt Sharke a headache; and that was always bad news for the rest of the Orcs.  They sat around a long table on stools made for thinner Elvish rears and drank the awful red wine that was ubiquitous in Catalucia.  Despite his hulking size Sergeant Harpy gently laid a hand on his officer's shoulder and made to sooth the bad tempered half-orc.  They had been extended patrol with Major Piecrust for a week and the eccentric officer was putting the fuel of murder into the mind of Sharke as the bridge they had been seeking all that time was nowhere to be found among these high hills.  The wine was just making his mood worse and the noise of the door might well put light to the powder keg which already sported a smouldering fuse.

It was the latest entrant to the taverna who spoke as he came up to the table.  A very tall and rapier thin Dark Elf who wore expensive and well tailored clothes.  His eyes glinted in the light of the lanterns hung from the ceiling.

“My name is Don Ludo del Scrabbal de Crosswards and I have the honour to be the most noble personage of this humble village.  My castle is nearby in the higher hills.  I have a problem with a bird which will not leave and is harassing my livestock.  No one in this taverna is brave or skilled enough to get rid of it but I heard that you Orcs of Albion are fine soldiers.  Will you assist me?”

Sharke turned his head towards the Dark Elf.  He looked him up and down and then told him where he could shove the bird that was troubling him.

“That is most unfortunate to hear. I can offer you silver in return for your help.  It will not be much of a task for those such as you.  I did hear you are the bravest of soldiers. Perhaps you green jackets are cowards?”

Fortunately for Don Ludo that was when Major Septic Piecrust returned to the main room of the taverna, having been attending a call of nature outside.  He had heard the last remark and was interested.  He ordered the now half standing Sharke to sit down and introduced himself.

“I bird problem eh.  You want our help and will pay.  Sounds reasonable to me and we have some time. Perhaps there is a bridge nearby too.  We would be delighted to help.”

“Bugger” was all Sharke could say.

“You see there is the bird to which I told you of in the taverna.”

Across the rocky plateau, far off, a bird flew in the cold air of the hills.  A strange bird as its wings seemed to be leather like a bat and its neck too long for any kind of bird that Captain Sharke had seen or heard of before.  His mind raced and then realised that the distance was playing tricks upon him.  At that range which was extreme even for a Bakur Rifle it was still bigger than his hand held in front of his face...it must be huge.  That sodding Elf had tricked them into being here.  With a wave of his hand the Dark Elf walked away briskly wishing them good fortune.

“Rifleorc Arris!  What is that bird?  You knows books.”

The bespectacled Orc gazed at the creature which was swooping and soaring in the air.  Clicking his tongue he eventually offered his opinion.

“Sir.  I do not believe that is a bird.  I think it is a being of Wylde Magicke.  I thought it might be a lesser Dragon of which the libraries of Lyonesse are stocked with accounts of but it lacks the arms those winged creatures have.  I think it is a Wyvern.  A living engine of death and destruction.  We had best be leaving here and coming back with cannons or not at all.”

Captain Sharke was in agreement and was about to give the order to make a retreat when the Wyvern spotted them and rising into the air it  began to fly towards them.  The grizzled half-orc swore and instead ordered them to unwrap their locks and get ready to fire.

“Bloody Donns!  We are going to need bigger rifles!”

In order to play this special 'what if' scenario you will need certain miniatures and models as well as terrain.  On one side you will require most of the miniatures in the 5109 Sharkes Chosen boxed set including Major Rekhardt Sharke and Sergeant Harpy as well as their mounted versions too.  On the other side you need VNT33 The Wyvern Kildane (which comes with a free Human Knight, not needed here but cool!).  You need a Flintloque game book of course as well.

The terrain set up is a six foot by four foot table which is rugged with several one level and a couple of two level hills with many scattered patches of boulders and rocky outcrops.  There is a dirt road running across the middle of the long axis of the table.  Players should take turns placing hills with the usual division of the table into one foot squares (I do this and it makes it simple) followed by the rocky outcrops and so on until finished.  It is a busy table with a lot of cover and terrain.  The Army of Albion side sets up at one end of the long axis of the table within 5cm of each other and the table edge.  The monster begins at the other end on the road 5cm in from the edge.  The game lasts an unlimited number of turns with the sole objective of one side driving off or killing the other.  It is not likely that Sharke will quit, it is not like him, but the Wyvern may flee with enough lead persuasion.

There is no Section creation as such in this scenario as the rules are given for Kilane the Wyvern and you use the pre-made statistics for Sharkes Chosen as well.  Kilane is one entire side on his own and if you wish to play solo then assign it Aggressive as motivation with the aim of killing as many enemy characters as possible.  The other side is a Section composed of these characters from the insert from 5109 (which you can get from free from the Alternative Armies website as a PDF):

The game begins and it is up to both sides to find a way to defeat the other.  Will magicke or black powder prevail?

Using the Wyvern Kilane in Flintloque

If you choose to place this most mighty of monsters in your games of Flintloque the Skirmish be warned for it is a foe of truly titanic power.  Kilane is a section of characters in its own right and always operates on its own.  Here is how to use the monster and unless otherwise stated treat it as any other mortal infantry character.

Kilane suffers a reduction of -2 to all Initiative Rolls in play due to its great size.  When activated it makes all of its actions before play passes on.   The Wyvern has a ranged attack and a melee attack with special considerations in both of them.  Using the normal ranged fire rules Kilane may spit an acid like substance at one target per turn this has the range and other considerations of a Kannonderbuss using solid shotte.  Kilane may make as many melee attacks per turn as it is possible to make and need not be in base to base contact.  Any enemy character within 10cm of the Wyvern's feet can be attacked.  Kilane never suffers any modifier in melee for being outnumbered and may only be attacked in melee by return if the other character IS in base to base contact.

The Wyvern can fly but it may only do so once per game.  This takes an entire action and the player may lift Kilane and place it anywhere else in permitted terrain where it may act as normal in the next turn.

Kilane is not used to black powder weapons and when it is first struck by a musket ball or other ranged fire of that nature it is shocked.  This results in a fifty fifty chance of confusion.  Roll 1D10 and on an even result roll there is no confusion but on an odd roll result (1,3,5 etc) the Wyvern is shocked into inaction.  For the remainder of the turn it may make no action nor defend in melee combat.

Where to go from Here

I hope you enjoyed this little 'what if' scenario created for Craig and Orcs in the Webbe this year.  I have played it three times with Kilane winning twice and Sharke once (who can kill Sharke I hear you ask!  Well turns out a ruddy big monster can) with each play being rather different.  I can say two things.  Firstly volley fire and secondly spread out!  Don't bunch up as the flight rule means the Wyvern can get right in among your rifleorcs instantly.

From here you can continue to use the playtest level rules for Kilane the Wyvern from the scenario to try out other events in Flintloque.  I have myself given a go to the idea of a full size Undead section going up against the monster in the depths of the Witchlands.  I had  twenty eight Undead on the table for another reason and gave it a go.  Oddly enough volley fire swayed the day for the Zombies.  If you prefer something else it occurred to me that an interesting scenario could involve artillery and fortifications such as the rules in Grapeshotte to give some more range to the fight on a larger table.

Lastly if you like you could consider adapting these rules for another monster namely OH31 Durzum the Troll who is equally massive but capable of different feats to the Wyvern.

Thanks as always for playing and supporting Flintloque.