An Excerpt from Flintloque: Retreat to Korunna by Gavin Syme

Gavin Syme, Lead writer at Alternative Armies, gives OITW readers an exlusive in the form of a whole scenario from next years Flintloque Campaign Book, Retreat to Kooruna, as well as a behind the scenes look at exactly what's going to be in the book.

Welcome to the last days of 2015 and a treat.  A scenario from the next book in the Flintloque series of titles which will be released in 2016.  One of twelve linked and you can read it right now by clicking on this link and downloading it from our dropbox account HERE.  The scenario is the most oddball in the book and sees your section of characters not fighting any enemy but instead trying to dodge pieces of falling masonry from an exploded bridge while pack animals laden with powder charges gallop past. It is called 'Watch the Falling Masonry or Squishing in the Rain'. We hope you like it!

In addition to this sneak peek scenario from the next book presented on Orcs in the Webbe for the 24th December 2015 I have a short article that will be published on our blog in 2016 but you can read most of it now below - What will 'Retreat from Kooruna' the first campaign book for Flintloque 3rd edition be?  What will it contain?  What will you need to play it and can you play it alone?  This and more.  Please read on and Merry Cryptmass from all of us in Joccia... I mean Scotland! 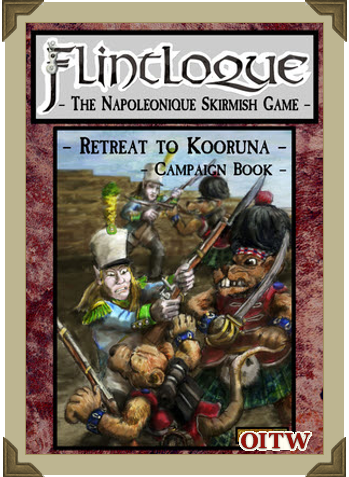 It has been a while since the last book for Flintloque which was 5028 Beir & Bones.  Well the next book is going to be a bit different.  Its a campaign book and its title is going to be 5029 Retreat to Kooruna. The first 'campaign book' for Flintloque 3rd edition takes the game in a new direction and level of immersion not seen before.  In 2011 I put a series of questions to the Notables Yahoo Group concerning the existing parts, the narrative, expanding the scenarios, putting solo options in and more before asking for feedback and comments.  The feedback was excellent and added to the growing file of materials.  The finer tuning continued with play testing of scenarios and fantasy special rules along with character profiles and drafting during 2011.  I then ceased work on the campaign book until this year due to a number of factors including ill health.  The files have been brushed off and the cogs are now whirring once more on another new book for Flintloque.

I am going to outline the development of the Retreat to Kooruna campaign book here and on our blog each time something significant occurs you will see it here.  So from now until publication its going to be this way.  I am not setting a release date but you will see it coming as the book grows.  To those who have been waiting a long time for Kooruna I apologise (it was first muted in 2008) but we are on our way now.

Here are the salient goals of a Flintloque campaign book as decided by myself, by the rest of Alternative Armies and more than six hundred responses from the fan base for the game.  Its what you can look forward to in the packed pages of the book:

Create and Lead a Varied Section – Army of Albion

Let me start this with something that drove me nearly mad over two weeks and that was the request 'can we play as the Grand Alliance and as the Ferach Empire right from the start'.  The answer to that is no.  Sorry.  I tried and tried but to allow the creation of a section of characters who then make their way through a series of scenarios that differ widely and then try to make those same scenarios fit the same amount of creation from the 'enemy' side it not possible in the space the book permits.  It would hamper the experience all around.  In Retreat from Kooruna you will create a section of characters from the Grand Alliance or more namely the Army of Albion.  This section can be infantry, light infantry or cavalry but not artillery. This section can be Albion Orc, Joccian Ratman, Hob-Goblin or Goblin or even KGL Ogres any race in the Army of Albion. The way you approach each scenario in the campaign arc will see your Army of Albion section set challenges both big and small and developing through the experience with new characters joining and those who survive getting better.

A dozen scenarios will be in the book. A dozen varied and challenging scenarios each with a great story, narrative, map, major and minor objectives.  The scenarios will feature ideas for miniatures to use as well as ways to expand them and how to play them solo as well.  Each is linked to the next.

Flintloque is a skirmish game and as such the scenarios will be created for character sections of between five and fifteen or so characters.  Every scenario will be very accessible with options of play.  This means that every scenario will be suitable for two players or one player with a solo mechanic replacement for the other human wargamer.  Scenarios may also have optional players to add in or remove as it suits them.  The campaign book has a wide scope across the whole Kooruna campaign but the scenarios each have a tight angle with great repeat play value.

What you Need to Play

You will require a single game book to play which in this case will be 5025 War in Catalucia which will give you all the rules mechanics needed.  While the campaign book will have extra unique mechanics and character profiles suiting its needs it will not provide the basic rules.  You would also benefit from the expansion book 5027 Grapeshotte for the game rules for artillery and weapons.  On top of this you will need the usual dice, measuring device and terrain as well as miniatures from Alternative Armies.  Certainly it would be ideal to have the exact miniatures needed for every scenario it will not be vital.  Suggestions for suitable miniatures will be made and you can use any miniatures from your collection that make sense to you.  Of course if you are playing a convention game or demonstration game you should use the right characters so as not to annoy your fellow players.

A New Race for Valon – The Dryadia

There will be an introduction to a new race for the World of Valon in the Kooruna book.  While not playing a big part but a fairly important one the Dryadia will feature in scenarios and as miniatures too.  Taking inspiration from real world history and culture the Dryadia are nomadic travellers of Urop with a fair hint of Wylde Magicke about them.  While personally courageous they are not soldiers and instead act as guides which will make quite a difference to the retreating Army of Albion.  Full rules for the Dryadia will be included in the book.

So there you have it.  This book will be a brilliant read.  It will be a treasured object that provides many hours of enjoyment before you even reach a wargaming table and once you do then it will amuse, challenge and invite re-play.  I will give you something that reminds of the days when wargaming was deep and meaningful and you got a lot for your money.  I just don't think that games created by committee give you the same degree of immersion that one mind can provide much like the writing of a novel.  Perhaps its just me...we will see.

An Orcs in the Webbe Exclusive!

The above interview was first published on Christmas Eve 2014.