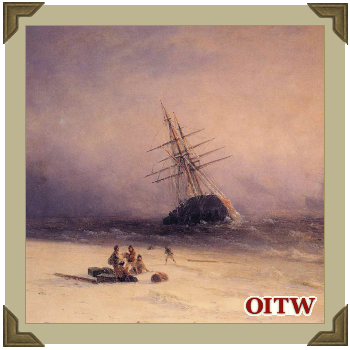 Artwork from 'Shipwreck in the North Sea' by Ivan Constantinovich Aivazovsky

In parts of Albion some nefarious types trying to feed thier families lure ships onto the rocks in a bid to harvest thier cargo.

The fishing villages along Albion’s north coast have never been prosperous. A bad winter and poor catches can push the inhabitants to the brink of starvation. Heavily burdened transports, laden with goods for Londinium pass by daily. And many a hungry belly would wish a strong storm, to smash the craft on the in-shore rocks, and bring relief. And many a hungry mind would be tempted to set up a false light on a headland to lure such a ship to its doom...

The Wreckers are in 4 sections of 6 wreckers each. Of these 24 wreckers, 18 are Raw , 4 are Average and 2 are Experienced. Between them, they have 3 muskets, 3 swords, 18 knives, and unlimited small improvised weapons. The distribution of characters and weapons between each section is at the controlling player’s discretion. All sections are classified as Guerrillas.

The Crew and Militia

The crew are not part of a section as such, since they come into the game individually, they can operate individually. As each is washed ashore, his characteristics can be determined:

All are Guerrilla unit status

The Militia are all militia status. They are 10 Orcs (2 Average, 8 Raw) armed with muskets and bayonets, led by a Average Lieutenant with a sword, and a Average sergeant with a half-pike (spear).

The militia will arrive from the southern table edge.

The wreckers win if they can carry 15 barrels off table.

Survivors - Each turn 1d3 crew will swim ashore, and 1d6 barrels will be grounded. Each will appear on the shore 4d10 INCHES from the left hand table edge. Each crew member and barrel should be rolled for separately.

Carrying the Barrels - Each barrel counts as a large object.

The Demon Drinke - The wreckers are subject to temptation by the barrels in the same manner as drink. A tempted wrecker must move towards the nearest barrel and try to remove it.

You can find rules for the temptation of the Demon Drinke in Flintloque 3rd Edition here on Orcs in the Webbe. - Craig, Ed.

The Militia Arrive - Each turn after the first, 2d6 should be rolled. On a roll of 11 or 12 the Militia arrives to arrest/kill the wreckers. All militia troops are subject to temptation by the barrels in the same manner as the wreckers.

This scenario was originally published on Orcs in the Webbe back in 2008. It, along with Matthew Hartley's Flawed Gems, have been around on various prior regenerations of Orcs in the Webbe over the last ten years and re-appeared as part of the ongoing Flintloque Archive Project on the 3rd July 2014.