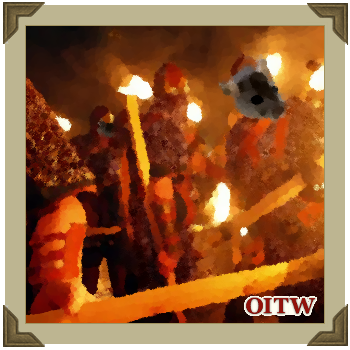 From it's roots in the Darke Age to the modern day customs Rats and other races practice, we look at what the celebration of Horcmanay means across all of Valon in this excellent background article from the Flintloque Archives.

As the calendar notes the passing of another year into the abyss of past times the editor of JOV... Journals of Valon... being told that the last instalment was read with great interest by Gentleorcs everywhere; decided that another article, this time on Joccia’s famous night 'Horcmanay' was in order. So be it. Read on and enjoy as a tale is told of brave Joccia and her sons and daughters.

Long ago in the violent Darke Age of Valon, before the snuffing of Magicke and the rapid exultation of industry gripped the green and misty vales of Joccia the Rats were plagued by the loathed attentions of the Orcs.

Though as strong and supple as the fiercest Orcish warrior the Clan Rats of Joccus (as the bonny land was kenned then) the Tribes of the Great Plain could muster more troops than could the Rats. As a result near slavery tormented the brave Rats and fight as they might they could not prevent the occupation of much of their warrens in the mountains by the Orcs.

Customs and prayers of the dour Rats were made treasonous by the ruling Orcs, making Joccian's all across the glens furious. But they could do naught but bide their time and pray in secret. Then the ancient allies of the Rat Clans, the haughty but exquisitely skilled Crystal Elves, came to their aid.

Sweeping the Orcs before them the armoured lances of the High Elves caused such trouble that Lung Shanks the Orcish chieftain called his warriors from Joccia to assist in pushing back the Elves.

Taking the chance offered to them, the Rats of Joccia rose up against the now weakened garrisons of the Orcs and routed them. In one stupendously bloody night the country of Joccus, later Joccia, was freed from Orcish tyranny.

Thus was born the annual celebration of Horcmanay.

For, as all on Valon know, no other country on Valon welcomes the New Year with the raw passion of Joccia.

This little nation, now secure in the bosom of mighty Great Britorcn, has reason to celebrate the victories of the Darke Age not only against the Orcish kin but also the Dracci who threatened them. The troubles of the '45 Rebellion behind them and many of their son's serving to fight the tyrant Mordred in a thousand battles all across Valon and many more far from their warren homes in Amerka and Londinium. To remember them all, the celebration of that ancient victory of one frozen night is remembered.

Apart from singing, the drinking of anything remotely booze like is widespread, as is the legendary hospitality. This hospitality, especially in cities like Edinborgh and Glasgee, has many strange and weird customs. Such as 'Furst Foot In', the demand that each guest in a house brings with them a single piece of coal for the fyre (a tribute to the infamous Rat tight fistedness?), some 'Shortbried' (eaten because being made almost totally of sugar even the drunkest can taste it) and a bottle of any spirit they choose.

'Furst Foot In' is thought to be a warning that if the warren door was knocked at night it was likely a roaming Orcish warrior intent on murder. Oh, and a small evil looking black cake known as 'Auld Boakie' which if brought must be eaten by all... with unpleasant after effects.

But for all this, its the singing and dancing that is most welcomed, one tune more than any other.

Written by Joccia's bard (also wenches ruin and tax collector) Ratty Burnes, native of Ayrseshire. The song, 'Fur Auld Layng Stein' is sung all over, not only great Britorcn but also Urop and beyond. Though few understand its grog sodden lyrics they feel its warmth and promise of better times ahead.

The lyrics are steeped in ale and mystery. Sung with passion but no understanding, few Rats would be willing to attempt to explain it but from the dusty library of the Notables Club in Mudfayre, Londinium, we have a wee note on it penned by Burnes himself when he visited the Club one rainy Horcmanay.

For those not conversant in Joccese this may well mean that the song celebrates violence against the enemy of the Rats and drinking more alcohol than should be Orcishly possible and survive. Surely not... but then for those who have visited the misty and wet land of Joccia you will ken how much they love to drink!

And there’s a hauld, my trusty furr!
And gies us a claw o’ thine !
And we’ll tak a right gud steaming waulk,
for auld layng stein.

Huppy Horcmanay fay all in Gurvan!

This article was first published as a PDF and released on Alternative Armies' Yahoo Group, The Notable Members, on the 28th December 2007.