A Flintloque Scenario by Steve Blease 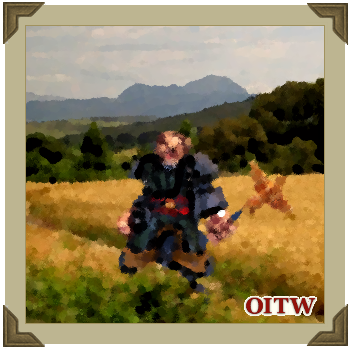 Lieutenant Sharke of the Orc Rifles and some Light Company of the 67th Mordor Foot go after an Elven Eagle.

Sharke walked in front of his Orcs and looked at them. They squatted on the grass, their faces filthy, their eyes bloodshot and sunken from the powder smoke and the strain of battle. They had done more than well. They looked at him expectantly.

"You've done well. You were good and I'm proud of you". They grinned, embarrassed at the praise, pleased by it. "I'm not asking a thing more of you. The Regiment's on its way here and in a minute Ensign Dunny will take you back and form you up on the left as usual." They were puzzled, their grins gone. "Sergeant Harpy and I are not coming. We think it's bad that our Regiment only has one colour so we're going to fetch another. That one".

He pointed at the broken Elf Regiment. Two hundred yards away, in the centre of the Elf line, was an Eagle. It flashed gold in the light, its outstretched wings shadowing the pole on which it was mounted. Harpy stared at the backs of the Elf infantry who fired as an unseen target in the smoke beyond. "It would make a great story, so it would".

As a game, Flintloque is geared towards small skirmishes arising out of raids, patrols etc, etc. However it can also be used to create part of a much larger action, a key event or whatever, something that forms part of a whole. The ability to allow the gamer to create a microcosm of a much larger event opens up whole new world of Flintloque scenarios. This is just one idea...

Following the flight of the outnumbered Orc army at Kooruna, the Iron Duke had been keen to have another crack at Mordred's legions, though with better odds. This opportunity came quickly as the High Elves invaded the Goblin realm of Al-Garvey.

Alongside the important River Tagur which runs through Catalucia into Al-Garvey, then the sea, is the major Dark Elf city of Tel'n'Vera. In a masterly move, the Orc army outflanked the Elves, forcing them to retreat back into Catalucia. Wheeling-Turn continued his advance and joined one of the few remaining Dark Elf armies under the command of Generalissimo Don Gergorio de la Composto at Tel'n'Vera where they met the forces of Mordred's army under the command of General Jean-Bastarde Jourdanniare.

Although the Orc / Dark Elf combined force outnumbered the High Elves, the Orcs formed the minority of the combined army and the Iron Duke knew that he could not rely on the Dark Elves to' put up much of a fight. Consequently, Wheeling-Turn ordered the Dark Elves into an abandoned fort on his southern flank and took up position on the hills to the north; the Cerro de Mandolin. 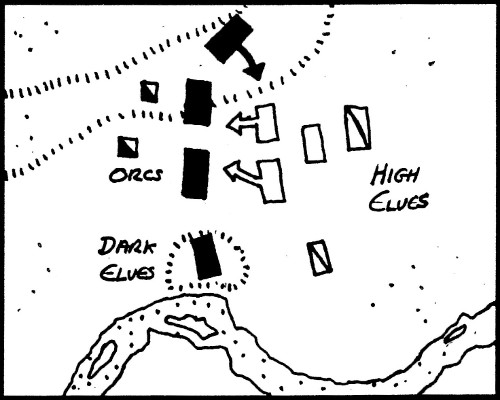 Jourdanniare ordered his troops to attack the Orc positions throughout the day in their famous massed columns that had defeated countless armies throughout Valon. Hard pressed throughout the line lines of red coated Orcs managed to repel wave after wave of Elf attacks, until, eventually the Elves retreated from the field leaving nearly 20% of their force lying dead.

So decisive was this first major victory over the Elves that the Iron Duke was much lauded in Albion and as a reward ennobled as Viscount Wheeling-Turn of Tel'n'Vera.

The Taking of the Eagle

During one part of the battle, Lieutenant Sharke of the Orc Rifles (currently attached along with his Orcs to the Light Company of the 67th South Mordor Foot) captured an Elven Eagle, touched by the hand of Mordred himself, from a Grenadiers of the Gardes Regiment which they had broken with precisely timed volleys of musket fire. Sharke was widely hailed as a hero for capturing this prize, the standard had been the first ever Elven Eagle to be captured. In reward, the Iron Duke gazetted Sharke to the rank of Captain and gave him command of the Light Company of the South Mordor Foot.

This small battle within a battle, the act of capturing the Eagle, forms the basis of this scenario.

Re-fighting the seizure of the Elven Eagle is a fairly straightforward process. I would suggest that the scenario is played as a solo game using the Solo Play Table. Alternatively if you have a regular opponent, both players could take part of the Orc force (see below).

If using the Solo Play Table, I would suggest that for a D result, change the result to withdraw 50% of walking movement towards own line and add a +% modifier to any roll should the Orcs actually get hold of the Eagle.

Whilst Steve was referring to the Solo Play Table for Flintloque 1st Edition you can easily adapt the Flintloque 3rd Edition solitaire rules.

To win the Orcs must get the Eagle off the table to the west. They lose if the Elves get it off to the east. 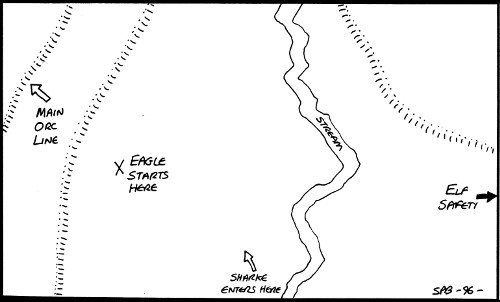 The Orc force comprises of Lieutenant Sharke and his five Orc Rifles (5001-O).

You can of course use the newer Sharke's Chosen miniatures to represent the Rifles, however, the accompanying rules booklet reflects Sharke and his boys a bit further on in their career and are a bit overpowered, you could consider using them without all of their special abilites or if you have access to the excellent Grapeshotte expansion book see the notes below the Elves section on what exactly Sharke is fighting in this adventure.

Additionally there are a group of volunteers of the South Mordor’s Light Company in support (54000, 54008). These volunteers consist as follows:

Lieutenant Gybbers - a Raw Regular. Armed with a sword and pistol. Not exactly Sharke's bosom buddy.

Ensign Dunny - a Raw Regular. Armed with a sword and pistol. Looks at Sharke as a role model.

Sergeant Mazniak - a Veteran Regular. Armed with a Line Sergeant's Halberd. Wonders what the hell he's doing in this madness...

If you intend to have a second player involved, then one player should take Sharke and the Rifles, the other Gybbers and the Redcoats. The player taking the role of Sharke should NOT READ THE FOLLOWING BRIEFING!

You are a noble and well bred pure blooded Orc from a respectable lineage of high ranking Orc warriors. Sharke is a jumped up half breed Orc, pure gutter scum from the poxed rookeries of Londinium. Since being attached to the South Mordor he has humiliated you and your uncle the Regiment's commander.

Most recently he stole your Goblin whore and you suspect he murdered your gambling buddy Lieutenant Berri undercover of last night's skirmish with the Elves. In addition he has been appointed as commander of the Light Company ahead of you!

You are determined to dispose of Sharke with either a bullet or sword in the back using the confusion of the following fight. Stealing the eagle from him would make you feel even better.

Only the Gybbers figure will actually undertake this foul deed. The other Redcoats cannot be involved in any capacity (though they will follow Gybbers orders to the extent that they could be the other side of the board or whatever).

The Elves should be put on automatic pilot using the Solo Play Table or controlled by an Umpire. There are eight Garde Grenadiers (51005, 51016) and ten Garde Voltigeurs (5001-E). They are from an Elite unit and are randomly worked out prior to the start of the scenario as experienced, average and raw as per the rules.

Again you can use the Flintloque 3rd Edition solitaire rules to control the Elves. If you are playing using the Sharke's Chosen rules for the Rifles you should use the troop type Guard Infantry for the Garde Grenadiers. They are the very finest of the Ferach regular troops with the best training, superior weapons and, of course, the best damned uniforms. Full rules for the Guard Infantry troop type can be found in the excellent Flintloque expansion book, Grapeshotte. 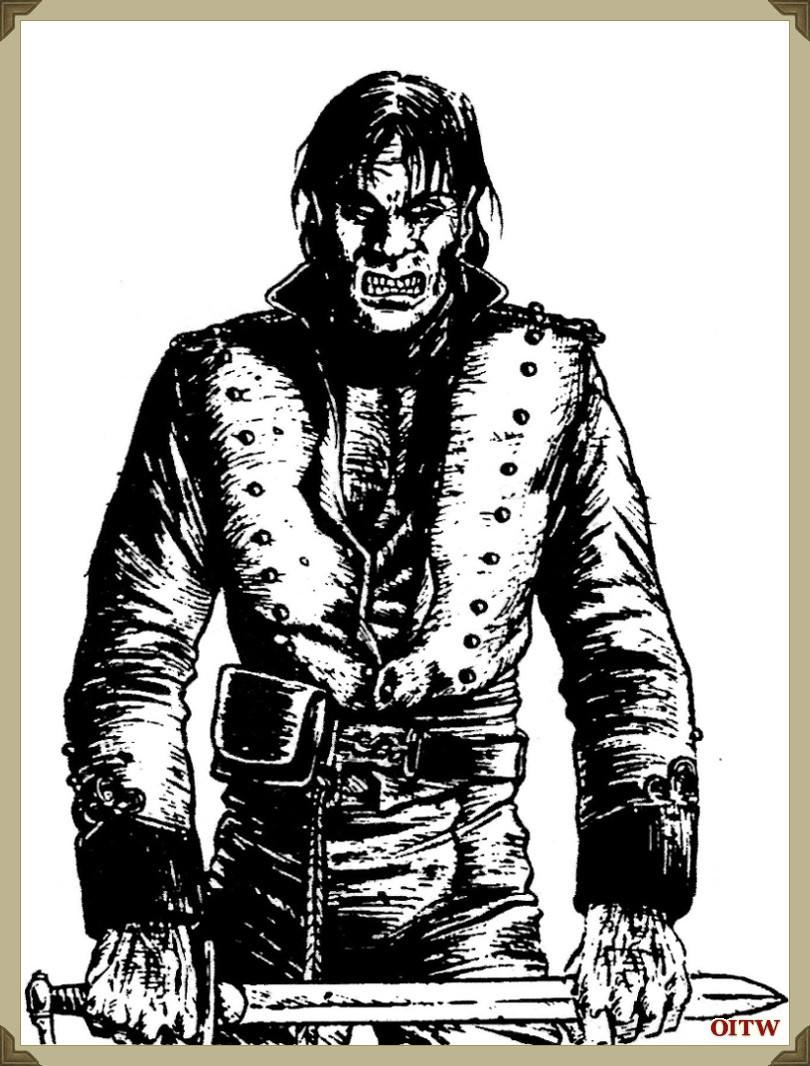 Lieutenant Sharke of the Orc Rifles
Drawn by Pete Knifton

The above scenario was originally published in the third issue of Wessex Games' Orcs in the Hills magazine in the Summer of 1996.

I have updated the product codes to match Alternative Armies current miniatures catalogue and made a few grammatical changes.

'Tel'n'Vera' became 'Tarreneva' in Flintloque 3rd Edition but I prefer the original tongue in cheek name and have left the text above unmodified. Perhaps the boys on the line used Tel'n'Vera as a nickname, perhaps Old Nosey thought it didn;t sound serious enough and changed it. Perhaps we will never knoiw ;)  You can read more about the build up to the Battle in the Flintloque rulebook, War in Catalucia (5025).