"Fyre As She Bares!" 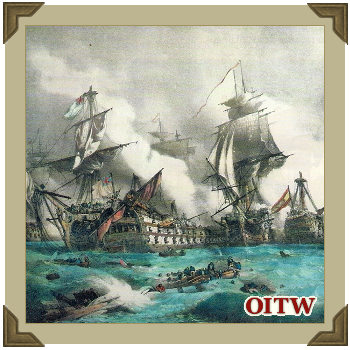 In 2004 Alternative Armies released 'Trafalgore', a free supplement which provided some background and rules allowing players to field Albion Marines and Officers of King Gorge's Royale Navye in both Flintloque Reloaded and Slaughterloo. They also released five packs of miniatures to support the rules. Below you can find the text of the original supplement. I haven't reproduced pdated the statistics for use in Flintloque 3rd edition as they can be found in the main rulesbooks, Flintloque - War in Catalucia and the Grapeshotte supplement.

The officers on the deck of the Frigate Neptunne saw the Elf Cuirassiers at the same time that the Frigate’s 1st Lieutenant saw them, the difference was that the Lieutenant was on the beach only a few hundred yards from the shining swords and the Neptunne lay further out in the bay. Rallying the tired Orcs of his landing party the Lieutenant roared:

"Draw your cutlasses and charge your pistols, hold fast!"

By this point the Cuirassiers had increased their speed to a gallop and were beginning to lean forward with their heavy straight swords. The Able Sea Orcs would be cut down in seconds once the armoured Elves reached them, there was nowhere to hide on the sandy beach and the few shots that their pistols and muskets could deliver would not stop the cavalry.

The Lieutenant drew his hanger and glanced quickly at the distant Neptunne before choosing his footing and preparing to meet the charge, his Orcs in their shorts and tunics around him weapons levelled at the enemy. They should never have made landfall, not here, not in daylight, but the water casks were empty and the sands deserted, even the Neptunne could not save them now.

Out in the bay the Captain of the Neptunne snapped his looking glass shut with a bang and spoke calmly to his first officer.

"Curse those Ferach scoundrels, well they ‘shant have a cut at my crew this day."

He ordered that the ‘long nines’ be run out on the port side of the ship and then corrected himself, the gap between the two groups was such that it did not allow for a full broadside, he might hit his own crew on the shore.

"Run out only number four, if you please, lively now; there is time for one ball only!"

On the gun deck the blocks and tackles screamed as the other gun crews pulled their cannon back inboard. Number four cannon and her gunners cursed and spat as the order was relayed in the semi darkness that they only were to fire. The lives of fifteen of their mates and officers depended on their skill, now in this moment.

The long nine was run out, charged, and a single iron shot rammed down its muzzle. Now the gun sat on its low carriage and the master gunner sighted along its menacing length. Longer than the best possible rifle shot, the distance was slight for a cannon of this size but the targets were fast and a miss would be disaster.

With a roar the cannon bucked and reared backwards, the smoke billowing out over the water. The gun crew peered out the hatch but the ball was gone and the smoke would clear slowly, the fight would be over one way or another by the time that they would see the effects of their shot.

The sun crashed and split from the breastplates and blades of the Cuirassiers, the sand thrown in gouts behind thundering hoofs and a scream on Elf lips as the charge neared the group of Orcs. A thin volley puffed from the pistols of the sailors and went unnoticed as the horses, lathered and wide-eyed came on. Swords reached forward, the Orcs winced and prepared to be cut down, then...

With a ripping explosion of air the iron cannonball struck at the midst of the mounted Elves, they never even heard its lethal approach over the blue water. At an angle the ball obliterated the rear half of the second rom front horse and then blasted the rider of the first to bloody chunks. Pieces of Elf and horse cartwheeled into the air in every direction, thumping into the riders and the legs of their mounts behind the mess of the leading Cuirassiers.

The charge floundered and folded in on itself many of the horses crippled in falling and many impaled on their own swords. Only those last in line survived and they spurred from the carnage running from the death and could kill so massively.

The Captain looked at the startled landing party and then turned to the deck saying, "Give number four crew an issue of Juniyper and a shilling each from the purser, thenbring in those casks and those Orcs from that forsaken beach and let’s be underway."

"The war ‘shant win itself."

The deck rumbled to the Huzzahs of the crew.

(Note that all miniatures have been photographed, based and painted by Alternative Armies) 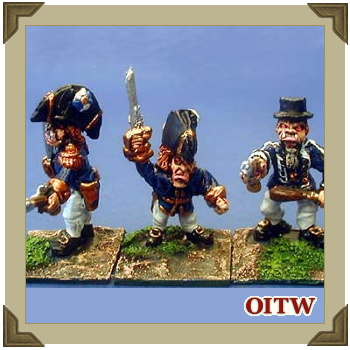 Three Orcs of the Royul Navye Frigate Neptunne, forming the Landing Party Command: A 1st Lieutenant with Bicorne, Cutlass and Boarding Pistol. A Mid-shyppe Orc on his first voyage with large Bicorne and Hanger. An Orc Boson’s Mate with Boarding Pistol and Belaying Pin. 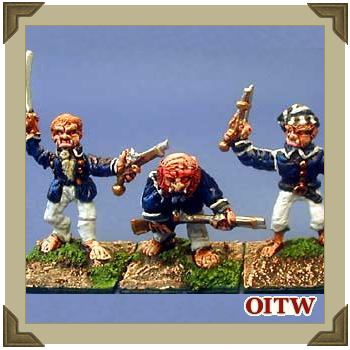 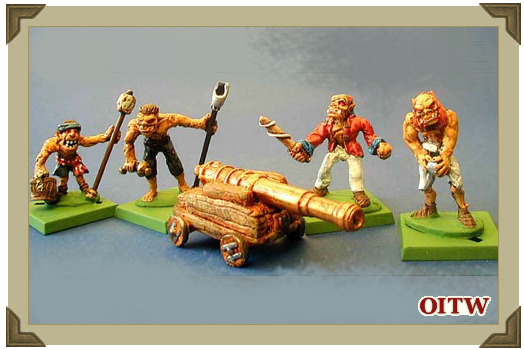 Royul Navye Long Gun on Shyppe carriage and mountings with Four Orc Gunners. Master of the Gunn with jacket and slow match, his mate with powder horn and shotte rammer, the loader with cannonball and ‘Ickle Jimm’ powder-Orc with bucket and sponge. 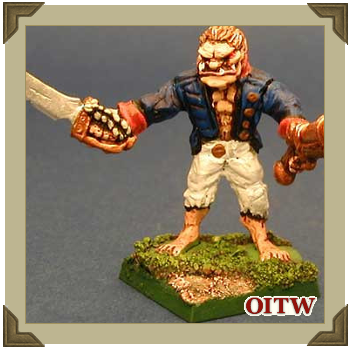 The infamous Ogre boarder of the late Royul Navye vessel Bouwntie. In jacket and half breeches with bare feet. Armed with large Hanger and an Ogre ‘Shyppe Pistol’for Roundeshotte or Shreddle, a valuable if not trust inspiring member of any Crew. 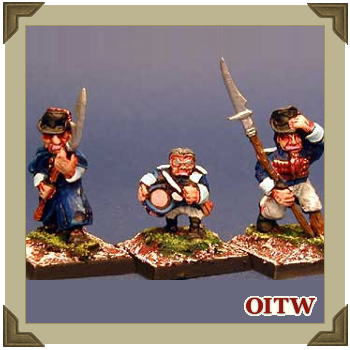 Three Orcs Marine Command of the Royul Navye the brains behind the brawn of the Marines of Albion. The officer clad in a privately purchased waxed coat wields the traditional short boarding halberd, the Sergeant/Std Bearer walks on a peg leg and balances his long wooden pole on his shoulder. Lastly Higguns an unfortunate Orc Boy carrying the company drum and peering through thick glass lenses.

Traflagore was originally published by Alternative armies in 2004 was first published on Orcs in the Webbe on the 15th December 2004.