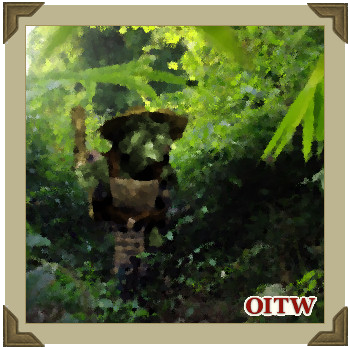 Expand your gaming on the World of Valon with action in the Kinkon Delta which sees the Union of Secessionist Albionites go up against the River Pyrates of the Kinkon Delta in this classic background article from the Flintloque archive.

Savage Fighting in the Kinkon Delta !
An Excerpt from The Illustrated Londinium Times...

Eventh as our nobleth Orcs doth stand shoulder to shoulder with our brave allies in Al-Garvey against the evil machinations of the Usurper Mordred, Eastern Valon doth once again burst intoeth the flames of conflagration. Following upon the decision by the Crown to grant independence to the rebellious lands to the East, did the Secessionist findeth themselves sorely beset by barbarous Goblin pyrates who launched many raids on the new Union across the Yan-Quay ocean. Regular readers of this august journal, such as yourself dear reader, doth know our views on the sedition that arose in the East, however even this illustrious journal must give support to the secessionists in resisting the felonious designs of the pyrates against the dominions of their neighbour.

For they defend a sacred principle, upon the recognition of which the tranquillity and civilisation of all Valon doth depend. Thus, the Union of Secessionist Albionites hath embarked upon a military campaign into the wild lands and swamps of the Kinkon Delta, home of the nefarious Goblin River Pyrates.

Although the young nation fifteen sloops doth sink the pyrates Dyak vessels in many encounters I the pyrates were for many a month secure in the jungle waterways of the Delta, small vessels sent up the tributaries falling victim to the native fauna in the form of great waterdragons, controlled by pyrate shamans. The expedition didth look like it be doomed to failure, having smashed the Dyak vessels but being unable to finish off the menace the expedition now called 'Kooks'.

Howbeit though that the young military didth hit upon a perfect solution in the form of Goblin Airboats, bought off our Al-garven allies, small vessels that float above the ground on four large balloons. Though their impact in the war against the Usurper hafth been mixed, here they proved invaluable and although the Union Orc Marines that sailed in them suffered greatly from air movement sickness, a circumstance that haveth led to thee boats being knoweth as 'Hueys', the ability to move above the perilous waterways gave the Marines a great tactical advantage.

However despite now being able to strike into the heart of the nefarious foe, the Goblins doth exhibit a tenacious veracity similar to their civilised cousins in Algarvey, tunnelling underground and exhibiting great fieldcraft against their civilised enemy. Although the Orcs of the Union have fought a number of successful engagements against the pyrates and have a decided military superiority, often using ingenious personal fyre syphons that spurt Elf Fyre into enemy positions, the pyrates have developed ingenious black powder weapons made from a local wood called 'bamboo' and still prosecute a relentless guerrilla warre against the Orc expedition.

Who willeth win in the end cannot be certain, the young nation should by virtue of its civilised pedigree arise victorious, however its very youth that gives it its unique vigour doth also mean that it lack thee resources to possibly suppress its foe. Whatever, this noble journal will tell you first.

The Kinkon campaign undertaken by the newly founded Union of Secessionist Albionites against the River Pyrates of the Kinkon Delta is remarkably easy to recreate using existing Alternative figures and a bit of imagination, but opens up a whole new sphere of skirmish gaming in the form of a Napoleonique Vietnam!

For the Marines use Orc Line and paint them in blue coats with red facings and white trousers (or in all white fatigues if you cut the tails down, reduce the cuffs and shoulder wings). Take all tufts and badges off the shakos and add a few "Vietnamy" accoutrements such as a clay pipe (to replace the ubiquitous packets of fags) and maybe paint some 'period' markings (such as a CND symbol) on a few. Bareheaded figures can have bandanas added. Uniforms should have a worn and tatty appearance, trousers be muddied etc. Look at some pictures of US infantry in 'Nam and apply it to your troops.

The personal fyre syphons will need to be converted. A couple of barrels and a tube (akin to the Skaven warp thrower are what's needed), just use the Elf Fyreshell rules (Grapeshotte, p.36 - The Being Set of Fire) to introduce napalm into your Flintloque games. Just use the blunderbuss % hit chances and make misfires (blowback) VERY painful on the user! Wet towels over the arms and around the neck of the user add to the Vietnam feel.

The Huey's could originally be purchased from Special Vehicle Force, who made an excellent 25mm Airboat but sadly this is no longer available but it is easily created from scratch.

Alternative Armies miniature packs Kinkon Command (53011) and Kinkon Goblins (53012) can form the basis of your Viet Kook force, some of the other Goblin packs would work well too. Any armed with bamboo spears (or carrying a banner) can easily be modified just cut these down to an appropriate length to represent muskets and maybe build up the stock a little, or even drop them a line as using AA's excellent parts service they may even be able to provide you with a selection of muskets and other small arms to use in customizing your Goblins.

If the Kinkon campaign if something you really take to, it is relatively easy to expand by taking at a look at Vietnam and similar jungle wars.

The Brown Water Navy is something that readily springs to mind, with Orc gunboats attempting to force passage up the rivers being attacked by Goblin Dyaks, shaman controlled water monsters and spirits. This would make for a fast paced, exciting and dramatic looking game (a historical parallel can be found by looking at Brook's campaigns against the Malay Pirates in the 1840's). Land based village sweeps can be great fun (providing you are not doing the sweeping!) with the GM running it akin to a role-playing game with him controlling the Kooks. A similar approach can be used for tunnel warfare as Orcs are forced to hunt for Goblins underground, using 'tunnel rats' (Joccians or what?).

Rules modifications overall are minimal, if you want to use booby traps maybe use the fieldcraft skill rules for spotting them (found in Simon Evan's excellent Sharkes Wagon scenario here). Finally to add atmosphere when playing, dig out a copy of the Rolling Stones' Paint it Black and jack up the volume!

The above article was originally published in Wessex Games' magazine, Orcs in the Hills, in the Winter of 1996.

I have modified the article slightly to match the miniatures and rulesets available from Alternative Armies.