An Erin Scenario by Gavin Syme,
with additional input from Alexander Scott and Bob McAlister. 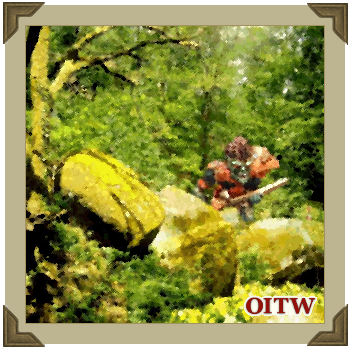 The Fomarian, Norc, hiding in the forest

Huyen and his band must track down and interrogate Gerrta the Pucci to gain information on the location of the Gateway.

This is the second of the four scenarios which make up the "Blade of Destiny" Legend for Erin 2nd Edition.

Deep in the green woods Huyen was filled with an incandescent anger, a rage that was not normal for his placid and calm nature.

Rugg had escaped, despite his warriors being trapped. It was not their fault he had escaped, the poisoning of the well of Byloco had made weak all the Sidhe warriors and women folk alike. Well now he would be avenged for the stain on his honour that Huyen did not deserve but felt all too keenly.

Small dead branches and leaves crackled under his gliding feet as he ran among the trees. The Hero had only a third of his warband with him as three groups had been needed for this task.

The task, based on information torn from a dying Fomor warrior, spoke of a Sea Devil, or Pucci to the Sidhe, a small Fomori sea dweller who had the location of the hated Gateway.

To catch the Pucci the Sidhe had split into three parts and approached the forest on three different paths; so as not to miss the Pucci.

Loping at Huyen’s side were the four Wolf Hounds of Cessa, given on loan to the hero for this undertaking. These dogs, more known to the world of Men than to the Sidhe had a real hatred for the Fomori. Combined with their tracking ability and dimly magic origins they surely would be able to find the Pucci Gerrta.

Now that Huyen had the Blade of Destiny, a weapon of ancient power and forging from the time of the Tuatha de Danann; capable of destroying the Gateway with only a few strokes he needed its location.

The Pucci had that location and by all of Erin he would be made to give it up this day.

It was then that the Wolf Hounds let out growls of nervous excitement to come. They had the salty scent of the Fomor and now they would be caught.

Huyen sprang ahead and through the trees they quarry was in sight, up the gentle slope he saw running wolves and two Fomori.

It was plain that the tiny darting figure must be Gerrta but by him was a hulking monster of a Fomor; it would take courage for this.

No matter, one big and one small, balance in all things.

The playing area is a gentle slope with thick forest and a central mud path running from south to north. Special terrain in the table centre, with the path running to its eastern side is an Ogham Pillar with effects as normal.

The Fomori all set up 15cm of the playing area centre and the direction of placement is decided by using 2D6 with random roll; using clock face directions 1 to 12.

The Sidhe set up along the southern edge of the map at any point as long as no two miniatures are within 5cm of each other and no more than 2cm into the table.

Aim of the Scenario

After chasing Rugg off the Sidhe now know he is using Elatha’s Gateway to Places to carry out the raids. This must be stopped. So the Sidhe have split into three groups and begun the search.

To find Rugg the Sidhe must track down and capture Gerrta the Pucci for he knows the location of the Gateway. With fortune it is Huyen’s group who have found Gerrta’s trail. Now they must catch him.

It is a major Fomori victory is Gerrta is not caught within the time limit of the scenario. It is a minor victory if Gerrta is caught but slips free and is not caught and held before the time elapses for the game.

It is a major Sidhe victory if Gerrta is caught and held. All other outcomes result in a Fomori victory of major or minor type.

The game ends when the Pucci is captured and held for one entire Turn or when 10 Turns have elapsed.

The Land of Erin (Rules)

1. Gerrta may NOT leave the table. He has been ordered by Rugg to remain near the pillar until collected by the Hero.

2. Gerrta may NOT be attacked in any form, he is too valuable to the Sidhe.

3. When a model is within 2cm of Gerrta it may attempt to grab him To do this a successful Cause Wound roll must be made. If the player controlling Gerrta can then make a successful Resist Wound roll he must be released and cannot be grabbed by that Sidhe for the rest of the turn. If Gerrta fails the Resist Wound roll then he is caught and held. The game ends at that point.

4. The Sidhe have a pair of Wolf Hounds with them captured as pups from the Milesians. Treat these as per the rules (pg 90) with an allegiance to the Sidhe. These may NOT grab Gerrta but the Pucci is so scared of Wolfhounds he may NOT move towards them at any time they are within 15cm. In this manner the Hounds may ‘box in’ the Fomori.

5. Gerrta is the Fomori Hero in this scenario. All Fomori allied creatures will obey him at all times.

Here are the forces in this scenario. All costs are give in Fate Points (FP) and in Riches (R). All Mythic abilities are costed into the characters total.

In order to play out this scenario you will need the following wargaming items. Some are essential and others can be exchanged for items you have in your collection. Just make sure that you and any other players are aware of what miniatures represent which forces in play.

All of these miniatures sets, and many more Celtic Myth miniatures are available now from Alternative Armies webstore.

The Peoples of Erin

This scenario is more a hunting game than combat, the objective to capture the Fomorian before time runs out for the Sidhe.

We recommend that players assign the role of the Fomori to the more experienced of the two players in the game.

During play testing Alternative Armies staff made some notes for tactics in this scenario. Feel free to read them (ignore them if you want!), but be fair, let both players read this section!

This is a straight chase. Catch the Pucci and get hold him then victory is yours!

Use the Wolf Hounds to chase Gerrta and then to pin him still between them. It is best to use your Sidhe to catch the Pucci as killing the Wolves and Norc is not needed to win. Just avoid them if possible.

You are out classed, the Sidhe are stronger than you. But on the plus side you need only to out pace them for ten turns and victory is yours. Use the Wolfs to counter the Wolf Hounds as those hounds will do their best to box Gerrta in for the Sidhe. Also you can keep Norc near Gerrta or to form a barrier that the Sidhe must kill to pursue you. Additionally the magic abilities you have such as Waterwall are perfect for ‘throwing enemies away’ from you.

Can Huyen find out the location of the Portal?

Find out in; 'Death to the Gateway Walkers'

Click on the logo above to visit their webstore

This article was originaly published in Rank and Style Volume 1, Issue 1 back in September 2007 and later republished on Alternative Armies' content portal, Barking Irons, and is reproduced here with permission.