Blade of Destiny - Part One

An Erin Scenario by Gavin Syme,
with additional input from Alexander Scott and Bob McAlister. 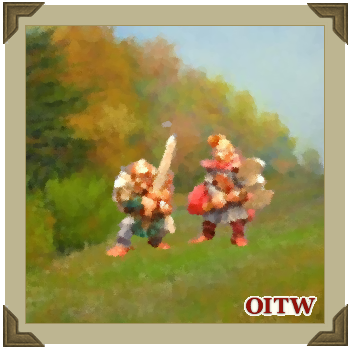 The warband of Huyen of Klia must stop the Fomori led by Rugg, from poisoning the Byloco Hill well.

This is the first of the four scenarios which make up the "Blade of Destiny" Legend for Erin 2nd Edition.

The grass upon the barrow hill glowed slightly in the dawning light of another blazing day in the legendary lands of Erin. Drops of water rivulet with colour luminous in the not yet day to come, caught the time that stood still and move yet some for the Sidhe.

In this hill was and had always been a toe hold in the real world for the semi magical faerie warriors of the Sidhe. Lovers of art and song and disdaining of the plain and callous, the Sidhe cared not for the fledgling warrens of Man or the runners of the Forest, nor the thinking sea monsters who were as ancient as they.

The Fomori as these foul creatures of the cold seas called themselves claimed mastery of Erin, claimed ancient and total mastery from the dark times before memory.

It was of these thoughts, heavy and troublesome, that Huyen of Klia, hero of the Sidhe barrow of Klia now brooded. He laughed a high note of derision to these ichor coated sea dwellers, how could they challenge the claim of the faerie kingdoms. The sun would rise as it always had.

At Huyen’s side, also looking out over the glowing grass, was the champion Vuyon blood brother to the hero and also of Klia. Both scanned the lightening ground for signs of the enemy. Sidhe had been killed, tragedy beyond words, by Fomori raiders. These mighty warriors and their loyal followers had come to Byloco two nights previously, following attacks around this rich barrow, now it seemed the sea devils had lost their mettle.

'It seems my lord that the cursed Fomor do not come at us this morn. Perhaps they fear our blades?'

Huyen moved slightly and his ornate armour caught the light of a sun now on the horizon.

'I think they come, I know not how, but I feel it deep within. An unease born of war and battle gives me this feeling.'

It was then that a stifling wind came from behind them, from within the barrow’s ringed fence, it was magic and a keenly powerful magic at that. They turned and drew their weapons, decades of combat taught readiness, and saw something neither had the ken of.

Ahead amid the now fleeing women and children of Byloco was a purple sheen of whirling shards growing larger and bolder. It touched the soil and then the cause for the total surprise and massacre of the earlier Fomori raids became clear.

The playing area is an enclosed area within a tall fence, smooth earth covers the whole area. The fence has two exits one on the north and one on the south. There is no special terrain in table centre in this scenario, though a portal has just deposited Rugg and his warriors there.

There are several stacks of hay, each one some 20cm toward table centre from each gate. Exact placement to be decided by players. A single water well is placed on the table, it is 20cm from table centre and its direction of placement is decided by using 2D6 with random roll; using clock face directions 1 to 12.

The Fomori all set up within 10cm of the playing area centre.

The Sidhe set up in two halves, one at each gate. Huyen, Vuyon, Lysua and Qyopto together and the other four Sidhe at the other gate.

Aim of the Scenario

The Sidhe have been taken totally by surprise, but then so have the Fomori. They were not expecting to run into each other at such close quarters.

Rugg had intended plunder, murder and then escape on foot as his plan. This has had to change. Now, outnumbered, the Fomori will try to poison the water well and then escape from either gate.

Huyen is single minded, he wishes to destroy the invaders, prevent the damage they intend, or to prevent their escape. Vengeance.

The game ends when the last Fomori leaves the table or normal Warband destruction occurs as in the rulebook.

The Land of Erin (Rules)

1. All Fomori carry poison in vials. It takes an entire turn for one Fomori to poison the well. If interrupted the process must be begun again.

2. The gaps in the fence are each 8cm wide and if any model crosses the threshold of these gaps they were considered to have left the game, or escaped.

3. Sidhe Surprise. In the first turn the Sidhe may NOT make any movements. They may though use magic and ranged attacks only.

4. Agony. If the well is poisoned then the effects of this are felt by Sidhe immediately. From the Turn the poison takes effect all Sidhe must cut their movement rates by 25% from that point on.

Here are the forces in this scenario. All costs are give in Fate Points (FP) and in Riches (R). All Mythic abilities are costed into the characters total.

In order to play out this scenario you will need the following wargaming items. Some are essential and others can be exchanged for items you have in your collection. Just make sure that you and any other players are aware of what miniatures represent which forces in play.

All of these miniatures sets, and many more Celtic Myth miniatures are available now from Alternative Armies' webstore.

This scenario is quite simple and is well suited to beginners and for use at conventions and game store demonstrations of Erin. We recommend that players assign the role of the Fomori to the more experienced of the two players in the game.

During play testing Alternative Armies staff made some notes for tactics in this scenario. Feel free to read them (ignore them if you want!), but be fair, let both players read this section!

Well, this is a tough one. You have more warriors but you are split up and you can’t move due to shock in the first turn. So run flat out and get to that water well before the Fomori poison it. Or, accept that unless you get in a lucky spear throw, the well has had it and stay where you are. This way you, as Rugg must try and escape, can block the gaps in the fence. Once its clear which gap he is making for bring your other guards across behind him.

Move fast! You are not as nimble as the Sidhe and they out number you. Use that first turn to secure the well. Keep together as a group (your enemy must close the distance and converge from two starting points). Poison the well. The two reasons for this are firstly it slows the Sidhe down allowing you to escape more easily and secondly it should secure a good chance of minor victory.

So will Rugg escape? Can Huyen catch him and his raiders?

Find out in the next scenario for the Blade of Destiny legend: ‘Find the Pucci’

Click on the logo above to visit their webstore

This article was originaly published in Rank and Style Volume 1, Issue 1 back in September 2007 and later republished on Alternative Armies' content portal, Barking Irons, and is reproduced here with permission.