An Age of Might and Steel Rules Article by Steve Hazuka 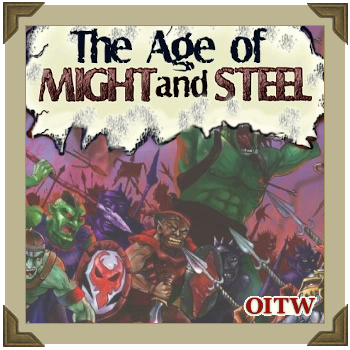 Full background and stats for using the mercenary army of “Grey Eye” Blackthorne in your wargames set in The Age of Might and Steel.

Mercenary armies of freebooters and swords for hire are rare but are getting popular in the wars. Adventurers looking for gold in the service of whom ever pays the best are common as a smaller force attaching themselves to larger armies needing to bolster their ranks but only a few charismatic mercenary generals are tough enough and get enough work to keep a full army employed for any length of time.

Getting his start as a successful captain in the Army of Lord Molltobenny the infamous Capt Nezri “Grey Eye” Blackthorne he was facing being discharged when the raiding Orc were finally routed and left leaderless. Not wanting to pay for a standing army Lord Molltobenny mustered out all but his original palace guard and the few units he kept for border defense. Capt. Blackthorne named “Grey Eye” due to the injury that destroyed his right eye marched off with a group of his most trusted warriors and used them as a his recruiting and cadre core. Blackthorne mercenaries shield reflects their mercenary ways, are gray shield with a large gold coin centered and a red sword point down superimposed over the coin.

The interesting thing about a mercenary army in AoMaS is you can use any race you like in the ranks. This means you can have a mixture of Elves, Dwarves, Humans and Orcs or any other race in the ranks. As long as the figures all represent the same type of troop type you can fill out the unit any way you like. Heroes can be from any race you like and since a mercenary army is technically a neutral army any creature from the Monster list is eligible to fill your ranks. The only race that can’t be in a mercenary army are any Undead unit or troop type. Mercenary Armies are unique in another way as they can have two Generals. The Mercenary leader and the employer of the army can both be represented on the table and used in activation.

Mercenary Armies may not form a Heroic Band.

You may not use any racial bonus since no unit is completely composed of a single racial type.

Since mercenary armies are in it for the money and not the cause they have some differences in how they activate. Since there is no Racial Leader the two General figures assume the role but the Command Radius is cut down to only 8 inches. Also the General either attached or unattached only gives a +1 to the Activation role.

Over the course of his career Grey Eye has accumulated a wagonload of trophies. Strewn with banners and flags of the defeated and relics from other battles Grey Eye bring this along to help Rally his troops. When attached to a unit it prevents or removes disorganized effects to a unit. Just what you need to keep a band of cutthroat and sword for hires moving along the battlefield.

Since Cpt Blackthorne was recently hired by the wizard Crafizorn you actually get 3 Magic Users with one taking the role of general also.

This article was originally published on Alternative Armies' content portal Barking Irons Online in 2013 and is reproduced here with permission.

Details
Written by Steve Hazuka
Category: The Age of Might and Steel
Published: 14 November 2020
Hits: 354