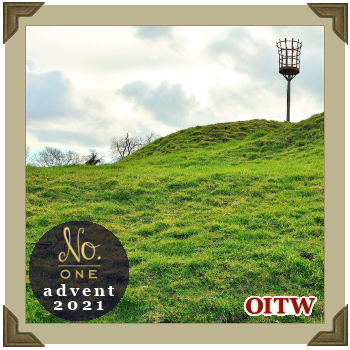 In this years exclusive game Matthew Hartley gives the classic card game Blackjack a dash of theology and exorcism based on a delightfully real 1926 event...

In 1926, at the height of the General Strike, two young Anglican priests paid a visit to an ancient earthwork known as Cock Hill, next to the church of St. Peter & St. Paul in the east Lincolnshire village of Burgh-le-Marsh. The village is situated just outside Skegness and known locally simply as Burgh. The priests, Gilbert Shaw and Max Petitpierre, believed that the Soviet Union was causing and prolonging the strike by directing psychic energy along a ley that entered Britain on the Lincolnshire coast (from Russia!), ran through Cock Hill and carried on to somewhere in Snowdonia. They exorcised the Saxon mound, believing they had cut off the malign psychic influence of the Bolsheviks. The General Strike ended shortly after...

The game is played using a deck of ordinary playing cards, with the jokers removed.

The deck is split into two, one for red and one for black cards. The decks are then shuffled separately and five cards from the black deck are placed in a line (called the power line) face down. This represents the current build-up of dark Soviet magic in the mound.

The black deck represents the power of the Soviet magicians as they attempt to build up further power and cause a revolution.

The red deck represents the power of the Anglican exorcists, as they attempt to defeat the dark magic.

The game is played as a version of Blackjack (also known as “21”), with the black deck representing the house.

The game is played in a series of turns, with the 2 cards being drawn from the black deck representing the score the exorcist player must beat.

Court cards count as having a value of 10, number cards have their face value and Aces can count as 1 or 11.

Once the black score has been determined the exorcist player draws and reveals cards in turn from the top of his deck. The aim is to exceed the total of the two revealed black cards, without exceeding 21. Scores higher than 21, tied scores or and ace and a court card for black are automatic losses.

If the exorcist player loses the round, one of the black cards used in the round is added the power line.

If the power line equals 9 cards or the exorcist player runs out of card, the soviets win and Britain is plunged into a revolution!

"According to Petitpierre, Shaw believed that ley lines (an idea only recently coined by Alfred Watkins in his book The Old Straight Track (1925)) were 'lines of magic' used by megalithic people, who 'Gathered together in a ritual meeting ... would generate a force of energy or excitement which their priests or druids would help direct along these ley lines in a psychic attack against their enemies'. However, Watkins never made supernatural claims regarding ley lines (an idea that only emerged in the late 1960s), and it seems likely that Shaw's beliefs about projected psychic energy derived from nineteenth-century occultism."

“In the years after World War II, the pioneering Anglican exorcist Gilbert Shaw waged a determined one-man campaign to achieve recognition for this ministry. In 1958 he succeeded when proposed guidelines for the authorisation of exorcisms (without guidance on what an exorcism should actually involve) were included in a report of the archbishops on healing. Shaw’s disciple Max Petitpierre repeatedly brought exorcism to the media’s attention in the 1960s and 1970s, culminating in an influential report on exorcism commissioned by the bishop of Exeter and edited by Petitpierre in 1972.”

You can listen to Dr Young talking about the incident from which this game derives here:

"BEGONE SATAN! A History of the English Exorcism"
https://www.facebook.com/ChurchesConservationTrust/videos/1020596742110256

The relevant excerpt is at about the 52 minute mark.

* Note that the photo has been used without permission and will be removed if requested by the copyright holder.