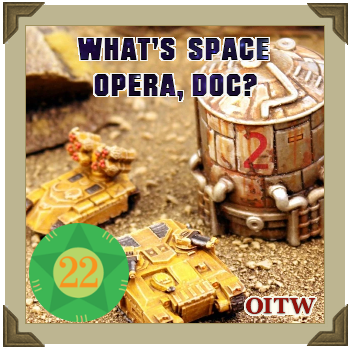 Photo and Miniatures by Alternative Armies

Designed with the twin philosophies of less is more, and a game you get on the table is better than one you never get on the table; Michael White brings us a fast-play science fiction miniatures wargame set in a unimaginably distant future...

Age catches up with all of us.

As I reach a half-century of existence on this obscure planet, my time for gaming and patience for mastering complex mechanics is rapidly evaporating. The following game is designed with the twin philosophies of less is more, and a game you get on the table is better than one you never get on the table. After all, for me at least, wargaming is about setting up movable dioramas, chucking some dice, telling a story of battle, and socializing with friends. To quote one of the most prolific wargamers I’ve ever known, “Miniature games should be simple. If you can’t teach it in 5 minutes, it’s not worth playing.”

With this in mind I present “What’s Space Opera, Doc?”

“What’s Space Opera, Doc?” is a science fiction miniatures wargame set in a unimaginably distant future. Man has ventured far into the stars, light speed travel is routine, peaceful and violent contact has been made with alien species, fleets of spacecraft wage war in orbit around massive gas giants, armored super-soldiers descend upon sprawling cities of glass and steel, entire civilizations wiped out in the blink of an... eh, you get the picture.

To play the game, you will need a reasonable collection of 3mm to 8mm scaled miniatures, some model terrain, a deck of playing cards, and at least two sets of polyhedral dice – the kind you use to play role playing games such as Dungeons and Dragons. Two sets for each player is preferable. Additionally, you will require two tokens for each unit in play. They should be two different colors. The rules assume the colors are red and yellow for maximum contrast on most playing surfaces. A quick internet search will yield a listing of many manufacturers of small scale sci-fi models, but this initial rules set will assume Bradley Miniatures distributed by Alternative Armies will be used. Units should be based 2 to 3 models for vehicles, about 10 to 15 for infantry, and 1 for walkers or large warmachines. Feel free to base them how you wish in a way that seems most convenient to you or provides the greatest visual appeal. For instance, you may want to base 5 infantry on a stand and remove stands as the unit takes damage for visual effect. Or, you may prefer to load 15 infantry on a larger base for convenience of only moving only one stand rather than three.

Oh, also, you will need some scrap paper to keep track of the amount of damage units take and any other things that my come up.

As these rules are meant to be brief and to the point, common wargaming terminology has been left undefined. Please use your favorite search engine to learn about such things as terrain, cover, line of sight, etc. All that’s important is that you and your group understand what these things mean to you and your group. Seasoned wargamers should have no real issues understanding the rules as they do not seek to reinvent the wheel.

Attack vs. will have two dice listed and a letter – H, L, A. H means take the highest result, L means lowest result, A means add the result

Sequence of Play
One player turn consists of:

1. Random Events: The player draws a card. Look for any units or special scenario rules that use the card pulled as a trigger. Only ONE Random Event may occur per player turn. If two events are triggered, the player drawing the card chooses which is to be applied. However, if a card would trigger an event, at least one of those events MUST be resolved.

2. Action Phase: On your turn, you may perform ONE of the following actions:

A. MOVE 1 unit.
or
B. ATTACK with any number of units against ONE target.
or
C. REMOVE all YELLOW tokens
or
D. REMOVE one RED token

A. Moving a unit – units may move up to their movement rate in centimeters as shown on the unit profiles later on in the rules. It may only move if it has no yellow or red tokens. To avoid unnecessarily long movement rules, units should be moved in such a way that no individual model or part of the base has moved greater than the movement rate. Units may not move through terrain that has been deemed impassable by player agreement or scenario rules. Units may not both enter and exit in the same action phase terrain that has been deemed rough. Place a yellow token on the unit that moves. Any unit with 10 or move damage points (temporary or permanent) moves at half speed.

B. To attack, select a primary attacking unit and any number of supporting units that do not have any tokens on them. Select a target unit. All participating units must have line of sight (LOS) to each other. Roll the dice shown on the primary attacking unit’s profile for the target type of the target unit. Add +2 to the final total for each supporting unit. The target unit takes this number of temporary damage. Use hash marks on your scrap paper and denote the unit that has been damaged. e.g. ////

If you roll doubles, note any potential DOUBLES EFFECT the primary unit may have. Place a yellow token next to all participating attacking units.

Here are two basic scenarios to get you started with the game. Sides are designated Red and Blue.

Battlefield: A 60cm x 60cm table with either a crossroads, hill, or town at the center of the table. Other terrain can be placed as agreed upon by the players. The central terrain pieces should be roughly 10 to 15cm square or diameter.

Forces: Both armies have 6 units. No more than half of the units can be of any one unit type. No more than 1 walker can be selected.

Random Events: Battle Fatigue - Any hearts pulled trigger a morale check. Select any Infantry or Vehicle enemy unit with ANY type of damage. Roll 2d6. If the total is less than the amount of damage, the unit has begun to lose its will to fight. Inflict another d6 of temporary damage to the unit.

Victory Conditions: The moment one side has destroyed half or more of the opposing units has won. Solely occupying the crossroads, town, or hill counts as having destroyed one unit for victory purposes.

Battlefield: A 60cm x 60cm table with at least 3 or 5 major terrain pieces. A mix of towns, hills, and rough terrain. The Red player places the majority of the pieces, and the Blue player places the remaining pieces.

Random Events: Iron Will - Any spades pulled by any player removes ONE permanent damage from one Blue unit. The player pulling the card still gets to decide which unit this ill be.

Victory Conditions: Blue wins if it can manage to get 3 units off the northern edge of the board. Red wins by eliminating 3 units.

People can contact me with any suggestions or comments at This email address is being protected from spambots. You need JavaScript enabled to view it.

The above miniature ruleset is an Orcs in the Webbe original and was first published on December 22nd 2020 as part of its 2020 Advent Calendar.

You can order the referenced 6mm Bradley Miniatures from Alternative Armies by clicking here or on the big AA graphic below.