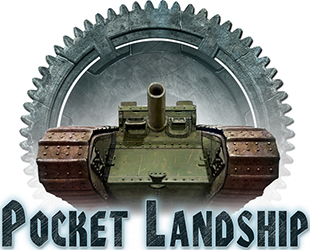 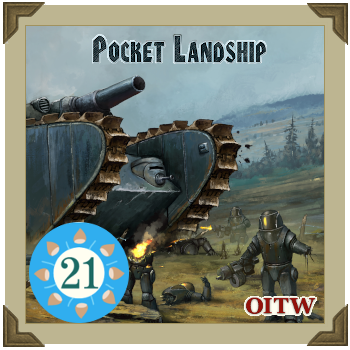 What is Pocket Landship?

Pocket Landship, from Word Forge Games, is a solo play game that has proven to be one of the surprise hits of 2019. Well over 1500 backers supported it on Kickstarter, and it has completed fulfilment within a month of estimation.

The game, created by Scott Allen Czysz, started life as a 9 card Print and Play entry on Board Game Geek. It was nominated for the Golden Geek, rolling in in third place overall and first place in the Wargame subcategory. The print and play edition is still freely available on BGG and even has a small expansion. The commercially available version sees a retheme to Steampunk and expansion to include a co-op and a campaign mode and over 50 different cards making the replayability massive. Some people have registered over 100 plays... wow!

In the game you are a commander of a Landship (what the Brits called a tank back in the Great War). The landship is represented by 3 cards, a hull, a cannon and then either sponsons or shock troops. The enemy make up 2 or 3 waves which must be defeated before either the hull or cannon are destroyed. Mechanically the game is simple. You roll 3 six sided dice (D6s) and then allocate them to your player cards. Each card has 6 actions which are activated by the allocation of a D6. These can be Machine Gun Barrage, Hunker down, Stuck in the mud or any plethora of other actions appropriate to the card. Once all D6s are allocated you complete the actions, hopefully damaging or destroying the front line of the enemy, which are quickly replaced by those behind them. Then you roll 3 D6s for the enemy allocating the dice from left to right, in ascending order, complete the actions... and repeat. You can also choose not to roll a D6 and repair part of your landship instead, and there are specialised Drivers, Commanders and Advantage cards to add to the mix. It’s a simple game with masses of choices, and it's bloody hard, as any good solo play game should be.

What is this Play Set?

Mark, the CEO of Word Forge Games, originally became aware of Pocket Landship when Orcs in the Webbe’s very own Craig Andrews introduced him to it. The game was to be published by another company, but they pulled out. Mark spoke with Scott and... the rest as they say is history.

Since then Mark (and his son Zak) have played a lot, and recently when Craig asked for contributions for this advent calendar, Mark got a Christmasy idea.

“Donald you're with me, Litzen... to me! We have a Package to deliver!" – Landship Commander Laws.

To play the game just download the attached PDF by clicking on the link below and also download the print and play version of the game on BoardGameGeek (click here to visit Pocket Landship's BoardGameGeek page where the free Print & Play files are available).

If you want to get a copy of the expanded commercially available version, check out www.wordforgegames.com.

To download the play set, including the rules and cards, produced by Word Forge Games,
just click on the PDF logo below. - Craig, Editor.

The rules from the above PDF are included below:

This set has been designed specifically for the Orcs in the Webbe Advent calendar 2019, to be played with Pocket Landship Print and Play version by Scott Allen Czysz. If you wish to play with Pocket Landship published by Word Forge Game substitute the word Landship in the action section with the word Mech.

Please note this is not an official play set from Scott Allen Czysz, but is published with his blessing.

You may substitute the Hull with the Transportation Landship.

You may substitute the Sponsons/Shock Troops with Corvette “S” Class.

You may substitute the Cannon with Corvette “C” Class. If you do, its destruction does not end the game.

Corvette Drivers Litzen and Donald may only be allocated to Corvettes.

You may use either, both or neither in your game. That includes one or both Corvettes. Only allocate 1 Corvette Driver to 1 Corvette.

Commander Laws is designed for this set of cards, but could be used in any game.

Allocating enemy damage to the Corvettes:

Damage from enemy cards targeting Sponsons or Shock Troops should be allocated to the Corvette “S” Class.

Damage from enemy cards targeting the Cannon or Corvette should be allocated to the Corvette “C” Class.

Do not allocate Cannon or Corvette damage to the Corvette “S” Class.

If a Pop Smoke action is activated, allocate enemy dice as normal, but do not complete the action for the specified enemy card.

Click on the logo above to visit Word Forge Games webstore