A Shadowrun Miniatures Game by WizKids 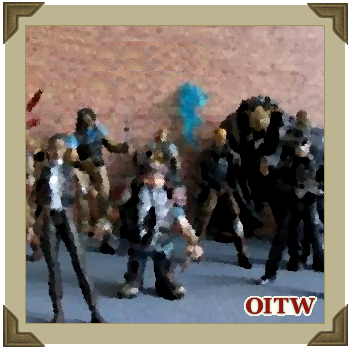 Shadowrun Duels was a collectible miniatures game produced by WizKids back in 2003 set in the world of Shadowrun in 2063.

Unusually the Shadowrun Duels 'miniatures' are 1:12 scale action figures each with a separate base that has three Clix dials. This twist on their single dial Heroclix range allows the figures take damage in one of three areas (Head, Weapon, or Body) as they fight during the game.

The game itself has long been out of print, however below you can find PDF versions of the rules hosted here on OITW, simply click on the PDF icons to download them from OITW's dropbox account.

(Each is worth reading for the ideas and flavour text but the Shadowrun Duels Reloaded PDF is the definitive rulebook in my humble opinion. - Craig)

The basic rules for using your Shadowrun Duels figures.

These are the official expanded rules for the Shadowrun Duels system. These rules add a level of depth, strategy, and on-the-fly game decisions that were only hinted at in the first rulebook. Using these expanded rules may lengthen game play.

This was an ambitious and wonderfully realised advanced version of the rules put together by Jeremy Schwennen back in 2004. Originally published on the Dump Shock forums. Jeremy made a few comments explaining his reasoning for the adapted ruleset: "My main goal was to add a character creation system, since WizKids [was not] likely to not give us any more characters. I also wanted to address some of the Character Point vs. Value issues I had, although I can easily see people disregarding some of those "fixes" as making little sense to them. I based things largely off of my own opinion about the characters and my own experiences. I also [created] a scenario and a campaign style advancement system that can allow a character to grow with repeated play. The actual mechanics of the game are almost completely unchanged - they are expended rather than altered, in most cases."

The above article was added to Orcs in the Webbe to support a scenario published as part of its 2013 Advent Calendar on Thursday 12th December 2013.

There are many articles featuring the world of Shadowrun planned for OITW's 2014 lineup, some of which will use the Shadowrun Duels rulesets above.

Whilst Shadowrun Duels is now out of print, the figures can be found every now and again on eBay, alternatively you can use any number of near future or sci fi miniatures to represent Runners in your games of Shadowrun.