I first saw this black and white image in a book at Worcesters new Library – The Hive, taking notes and later searching the Web, I found this black and white sketch of a Gaul/Celtic mortuary structure and decided that it would make a great scratch-built model or piece of terrain to fit in with my Pax Bochemannica miniatures from Maveryc Games. 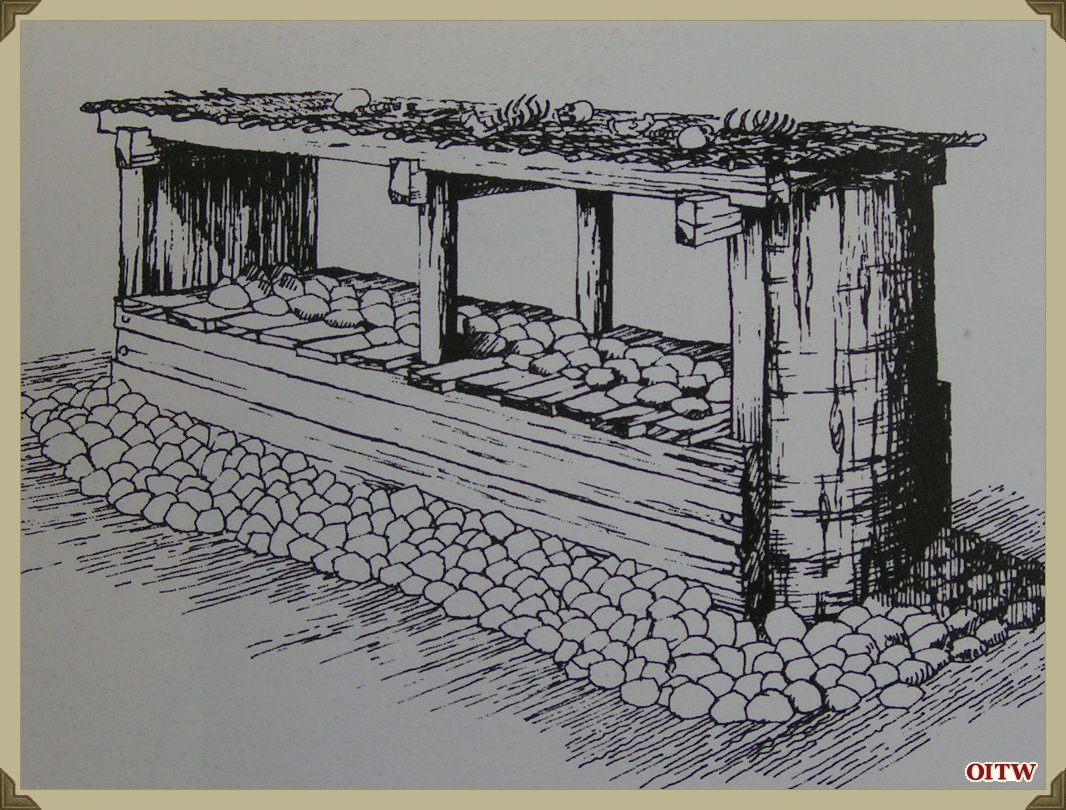 The structure is speculative; it would have been used to lay out the bodies of the deceased. The bones were then stripped clean by carrion and when a suitable time has elapsed the remains would have been buried.

Similar structures and techniques would have been used by many early cultures.

The basis of the main platform is Blue foam. 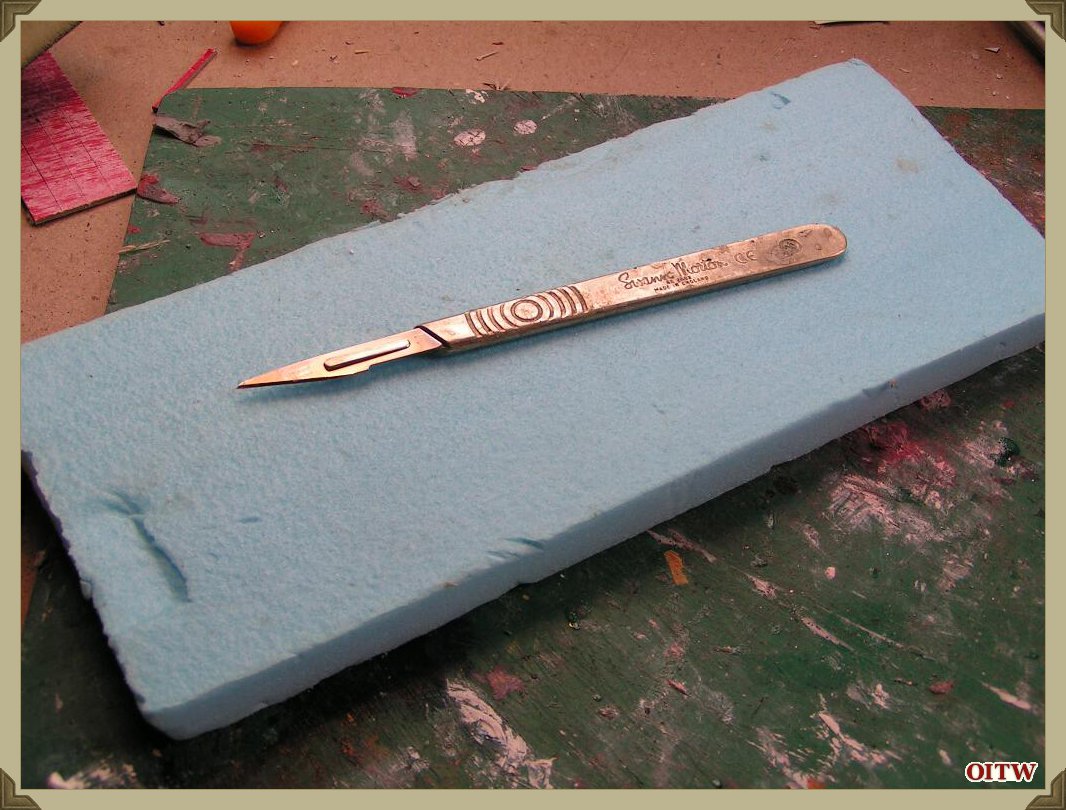 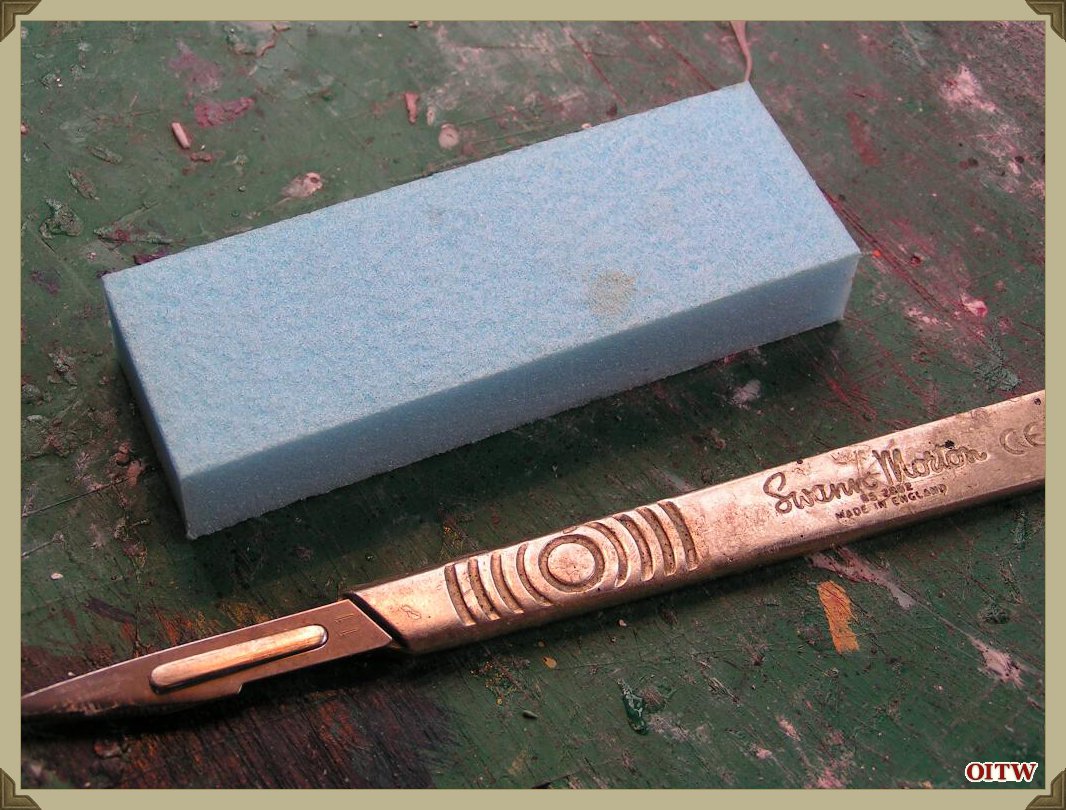 Two upright were shaped from a single piece of balsawood and textured with the blade of a modelling saw and some rough sandpaper. The internal support structure was built from more balsawood and glued in place with superglue. 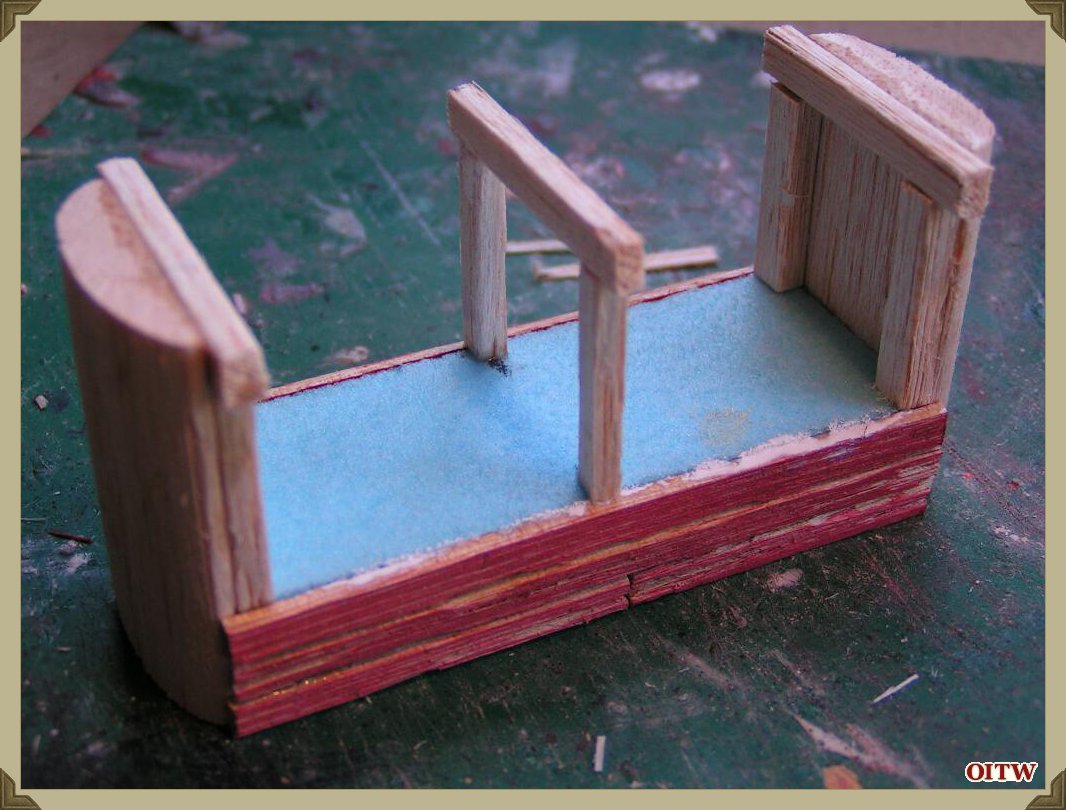 The base was clad with some coloured lollipop sticks (textured with the teeth of a modelling saw) and a central support constructed from balsawood was added. 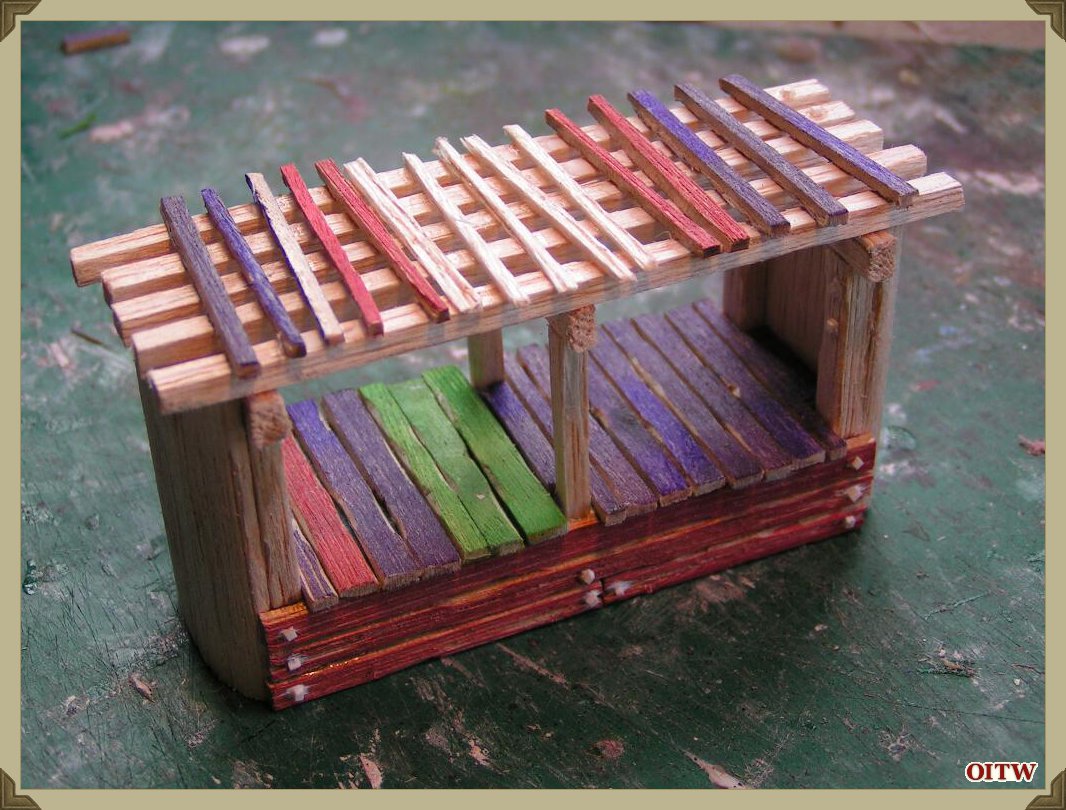 More balsawood and lollipop stick cladding and construction. The pieces have been glued with superglue and detailed with small slivers of plastic card. 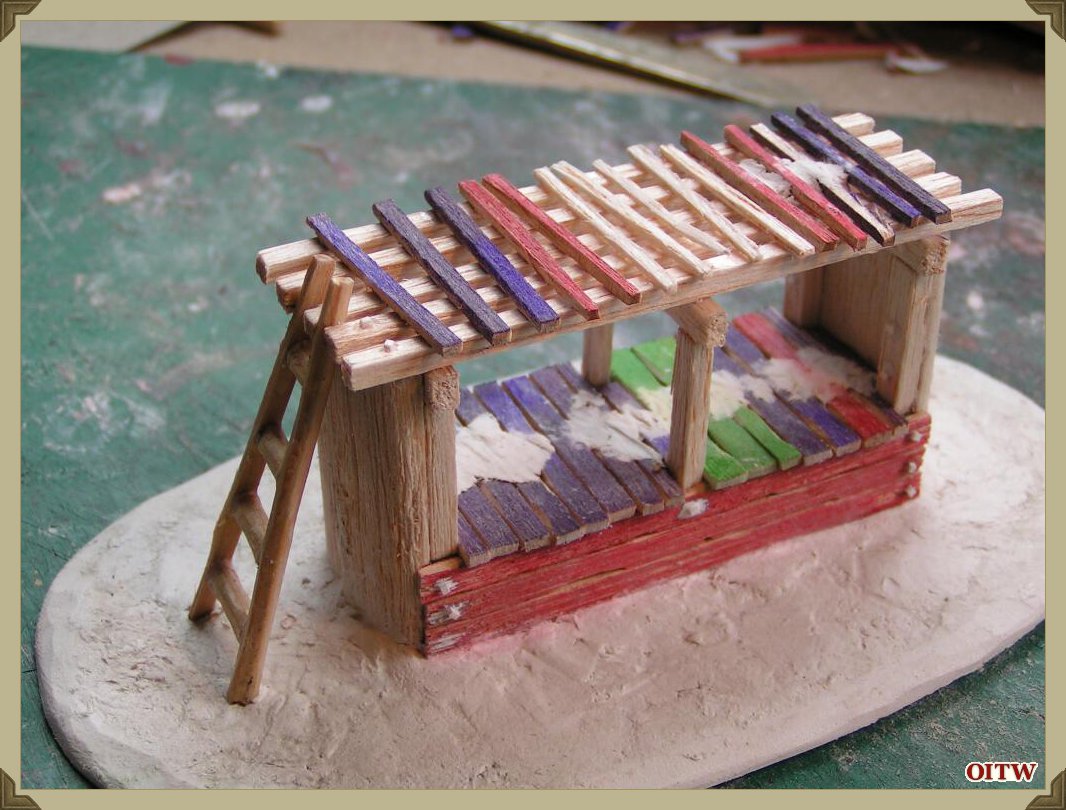 The whole structure has been glued on to an oval of 3mm thick plastic card with the groundwork built up from DAS modelling clay.

The make-do ladder was built from an off cut of wood over a sheet of greaseproof paper and later glued in place with superglue. 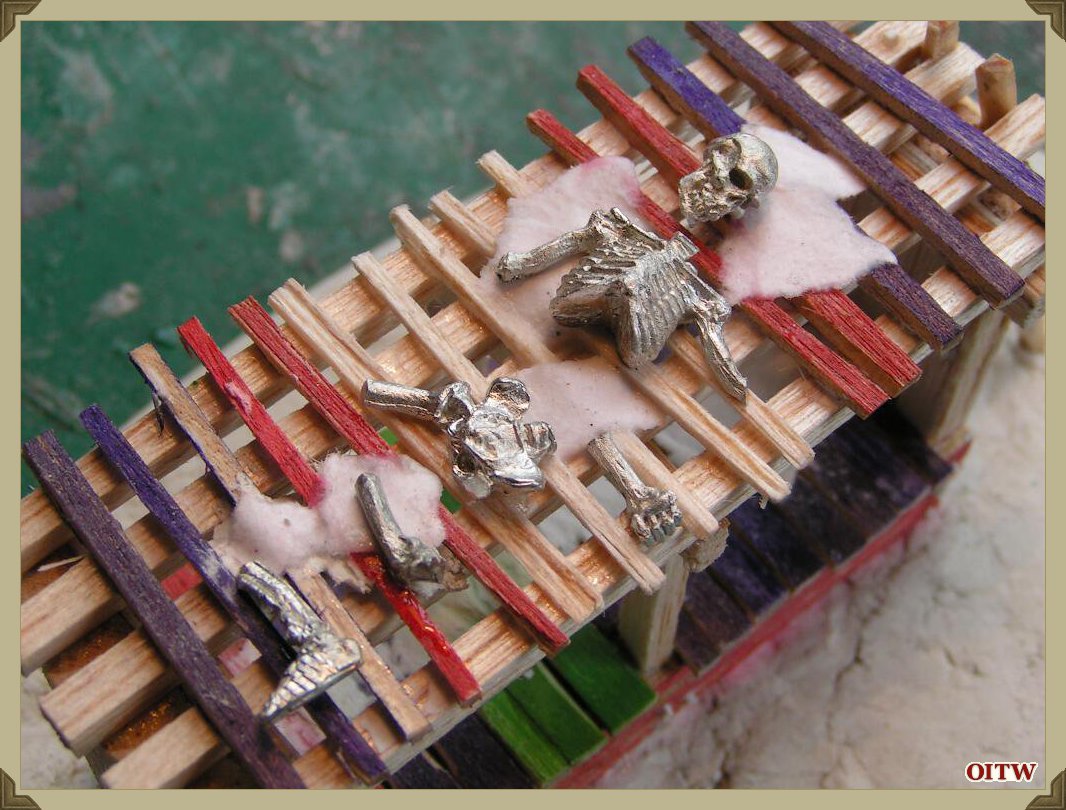 The skeleton is a cut-up 40mm Spartan Games Miniatures as I thought the plastic Games Workshop skeletons looked too small. I have superglued them in place over a couple of pieces of torn art paper. 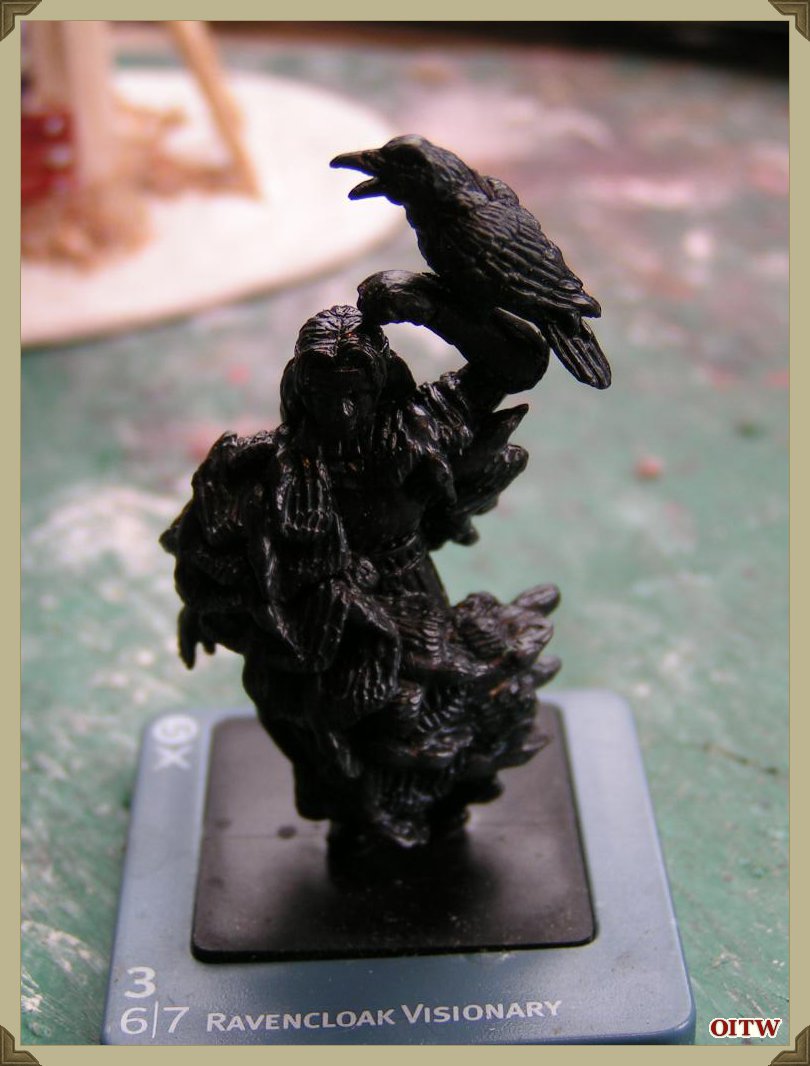 I thought the model needed something... and I have added a crow from this plastic figure. I trimmed off the crow and mounted the bird onto the structure with the aid of a short piece of paperclip. 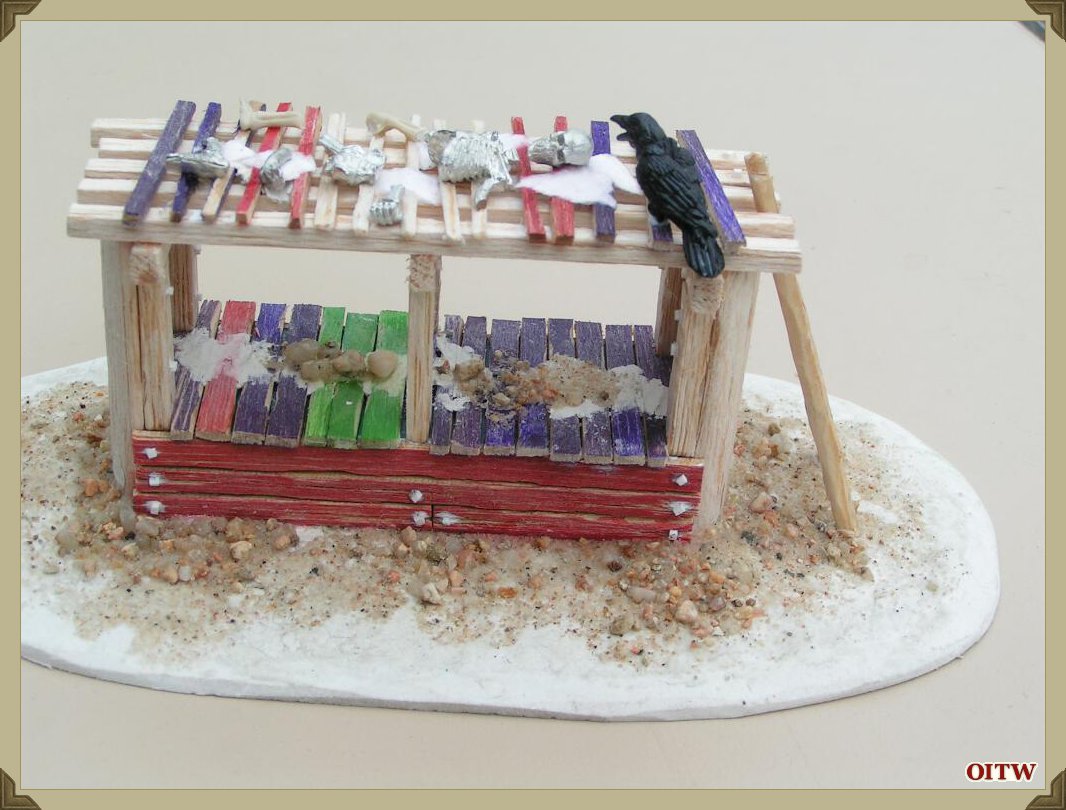 I then textured the base with some sieved stones and fine sand which has been glued in place with dilute uPVA glue. 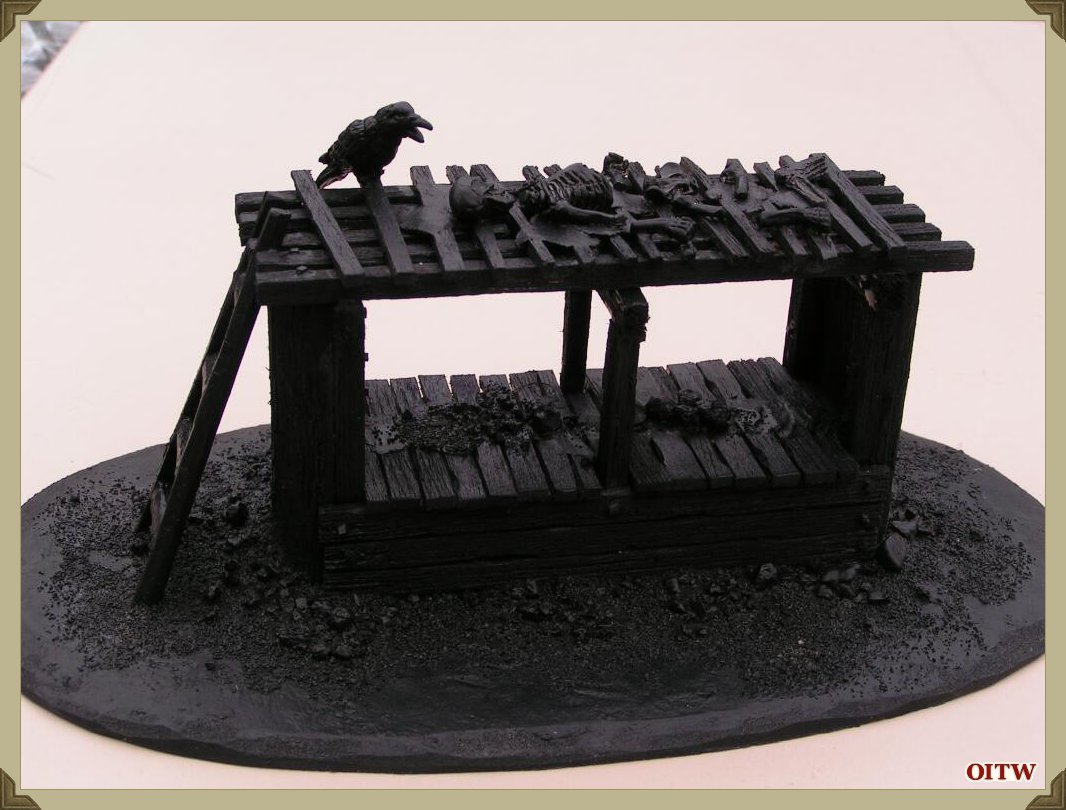 Painting commenced with an all over black undercoat applied from a ‘rattle can’ spray can and touched up with dilute Chaos Black from GW. 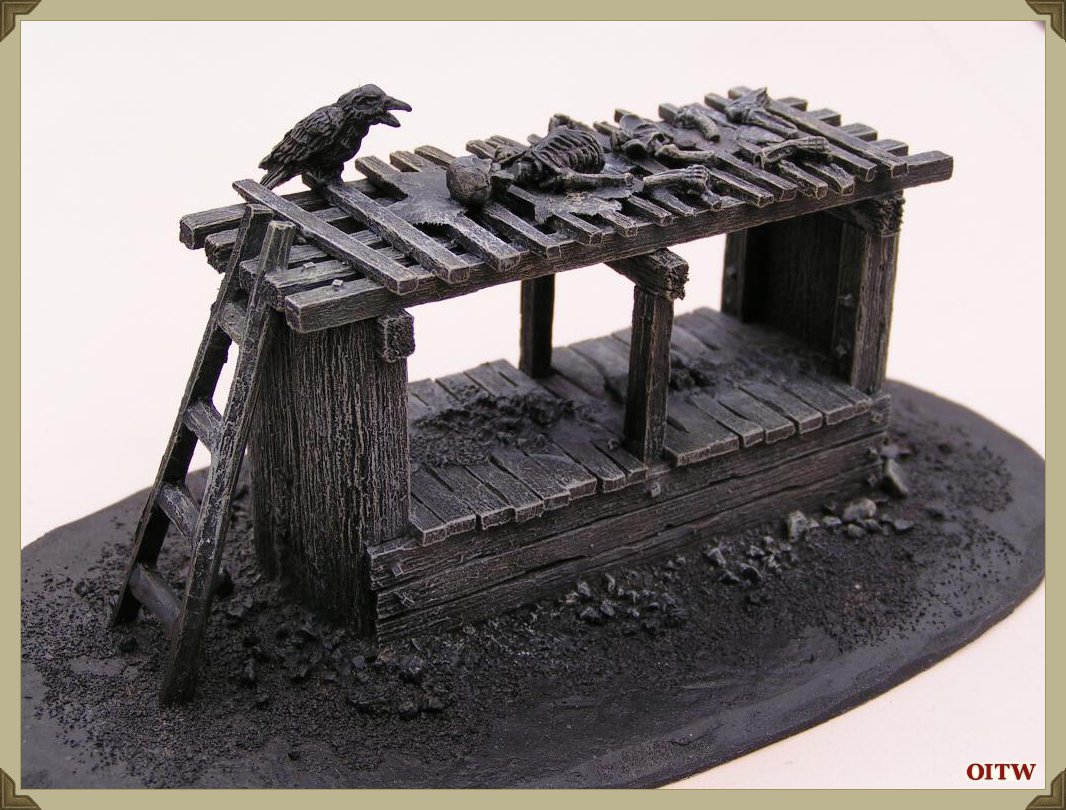 A quick dry brushing with a mix of greys and browns. This was followed by a ‘wash’ of black and sepia washes. 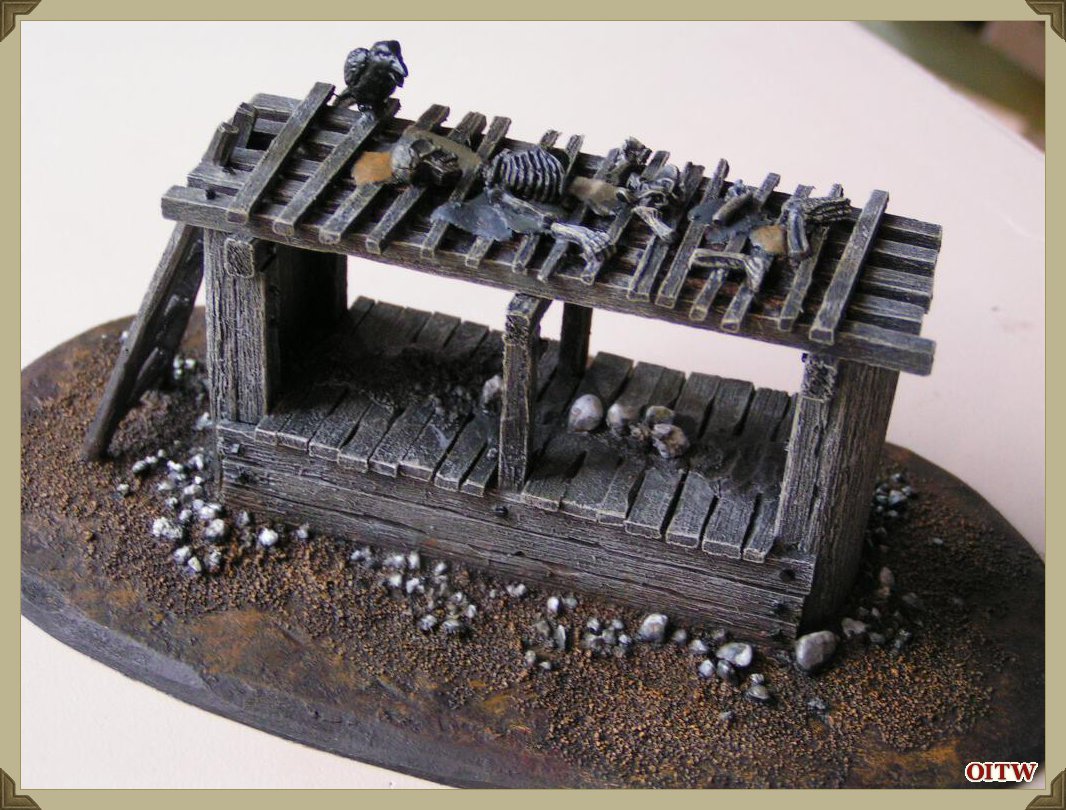 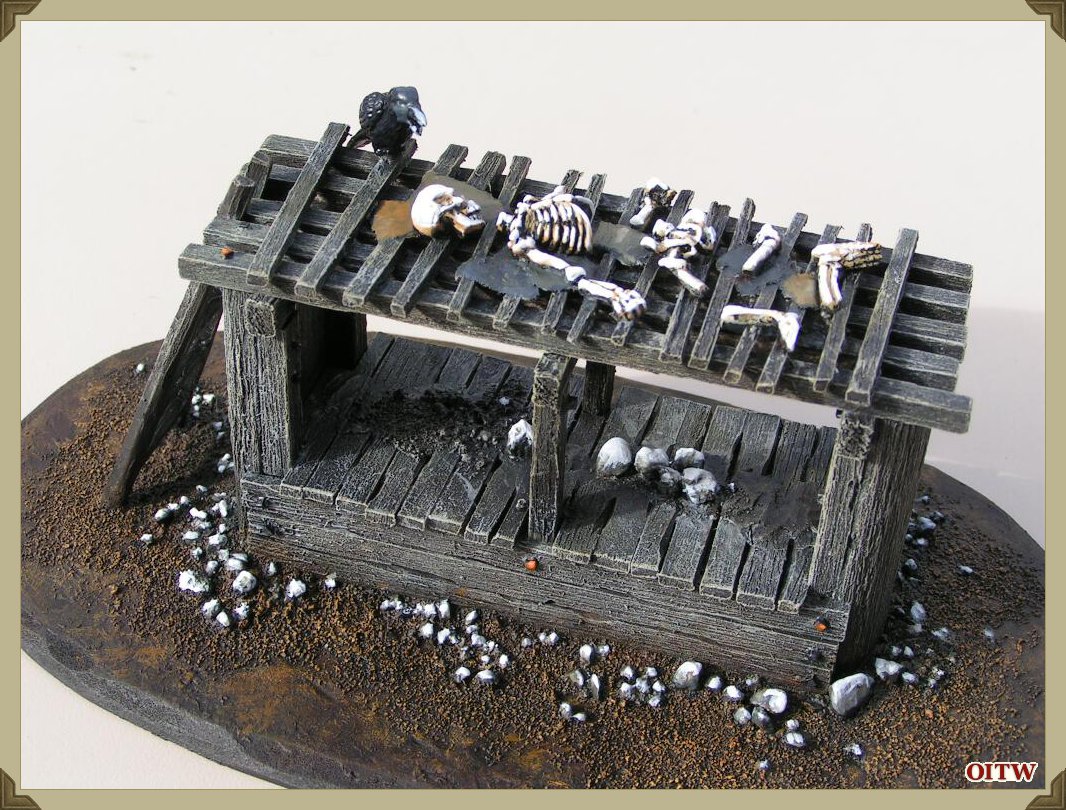 The skeleton was basecoated with Snakebite Leather and highlighted up to an almost pure Skull White. The leather areas were painted with dilute Brown and Grey tones. 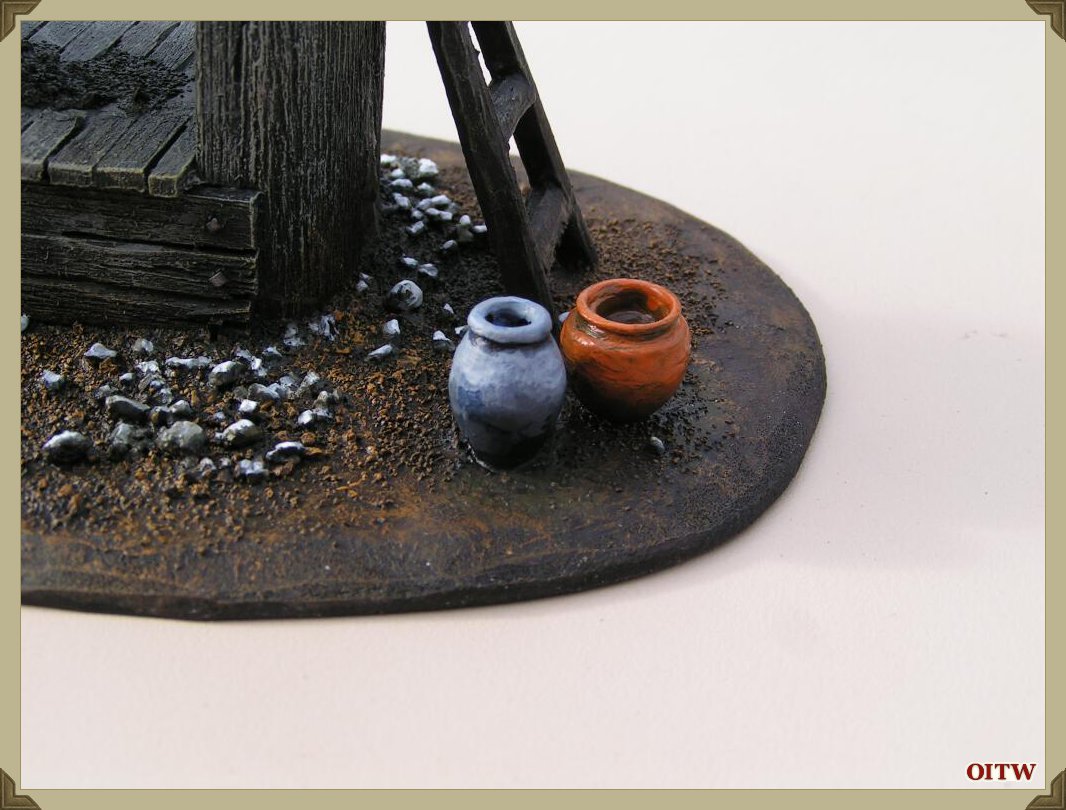 Once again I felt that the base needed some added colour. I trimmed and sanded a pair of resin pots before supergluing them in place and painting one in terracotta and the second in pale grey-blue. 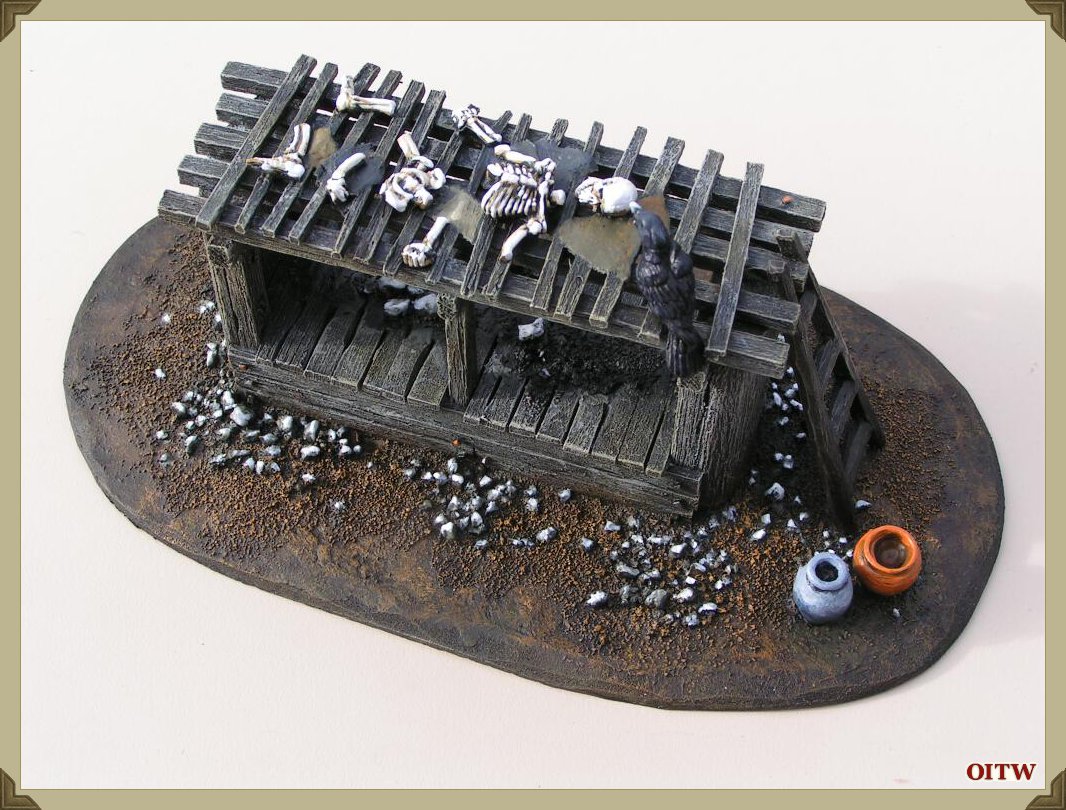 I varnished the whole base with Galleria Matt Varnish. 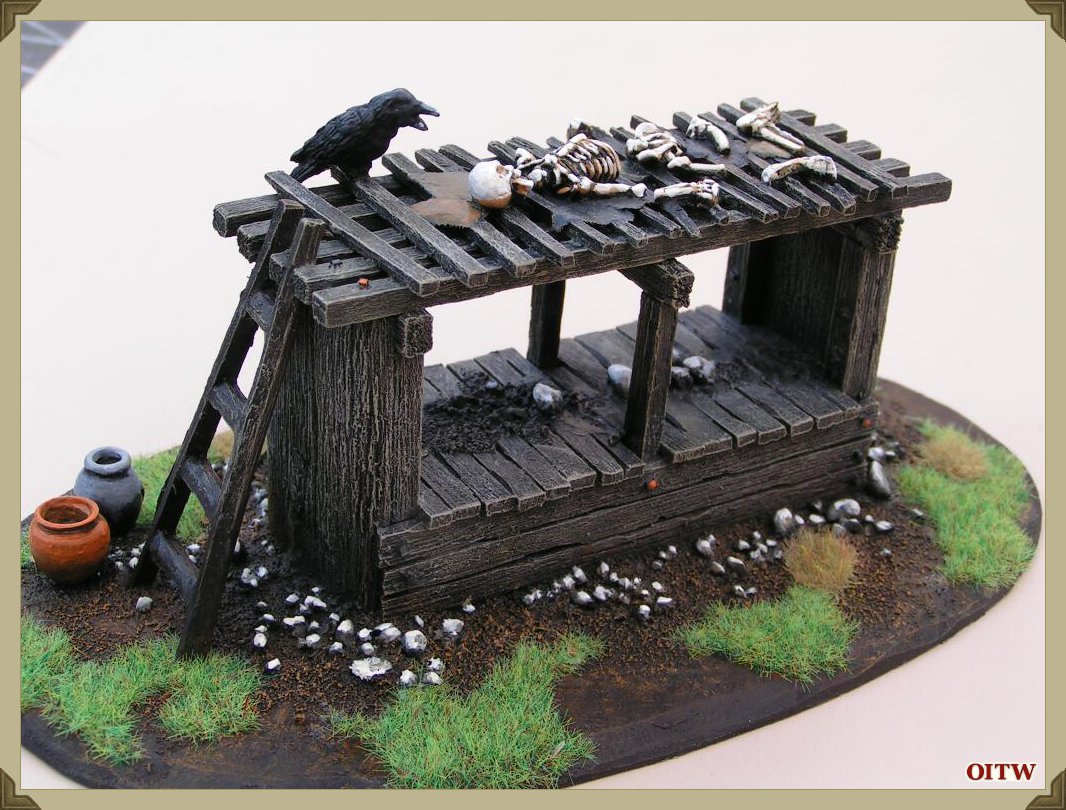 The base was decorated with green static grass and some static grass tufts applied over uPVA glue. I purposely modelled this piece of terrain with a darker groundwook colour than my usual Snakebite Leather colour as I wanted a ‘darker themed’ piece to go with my Pax Bochemannica figures rather than my comic book Flintloque miniatures. 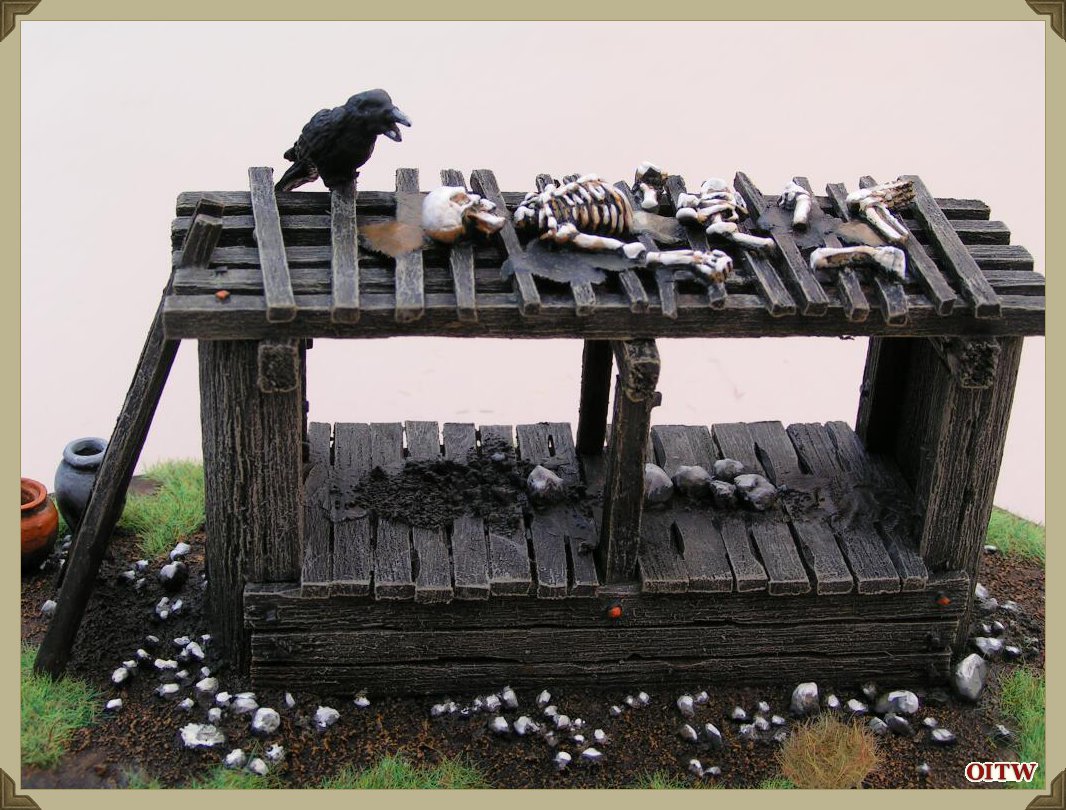 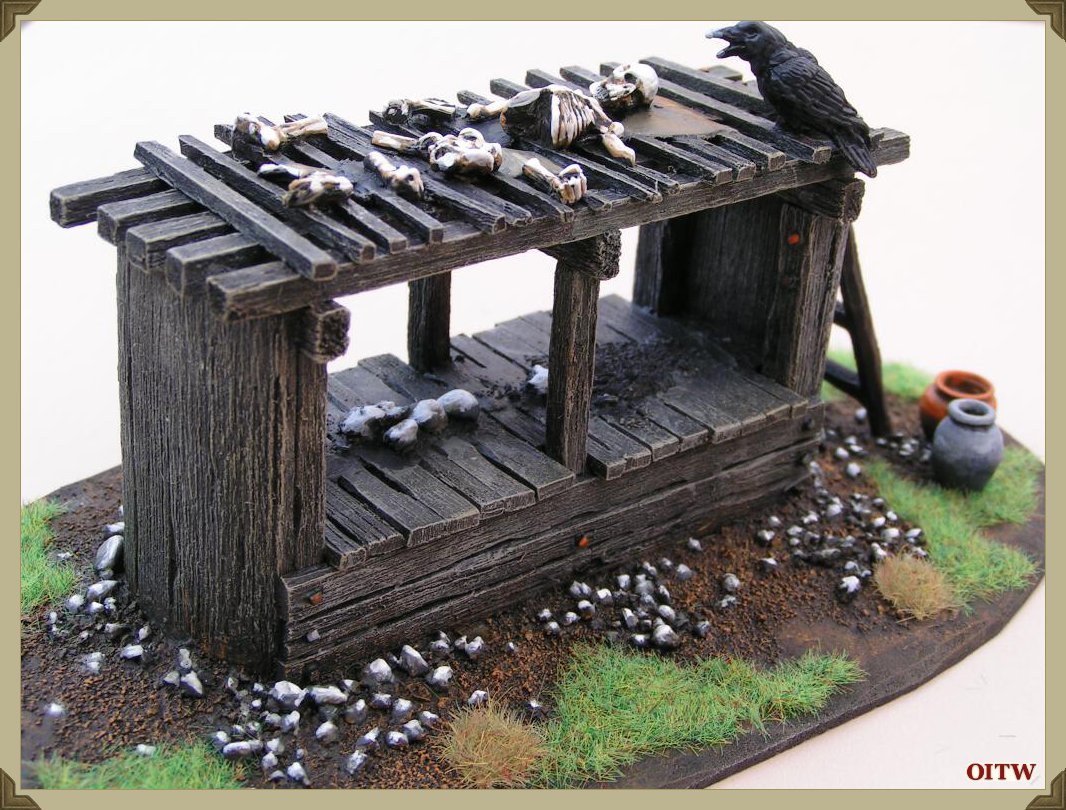 I have modelled or written Halloween Specials for Craig Andrews (in his role as Editor of Alternative Armies' content portal Barking Irons Online) for the past four years and wanted a similarly macabre article this year to carry on the tradition. I saw this structure and knew that this would be my 2013 contribution. Whilst Pax Bochemannica was in my mind whilst creating it, it would fit right into games of Flintloque as well as many other 28mm wargames.

An Orcs in the Webbe Original!

"Modelling Masterclass - Mortuary Structure" is the second of several articles for Pax Bochemannica that OITW has planned over the coming months.