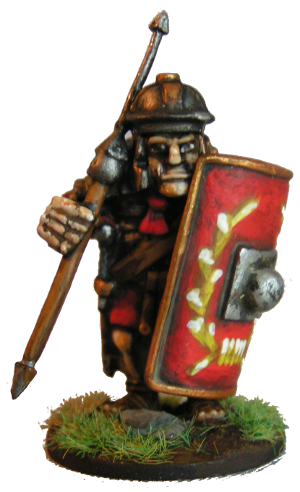 Stumbling home after a night out celebrating his birthday, the Boche Rodknee and some of his Youf mates decide to pitch a few cleverly worded insults (not to mention a shed load of stones) at some Noman legionaires on thier way home.

“ ’Appy Day of Birth Rodders!” said Del as Rodknee opened the broken door on his little hut. When Rodknee saw the little Halfling, all dressed up in his Geezer gear no less, he was overjoyed. Since Del had gone up in the world (literally, being Geezer meant his hut was now raised up on a platform) he’d hardly seen his brother. And now it seemed he was going to be treated to a night on the town (such as it was) with his big brother, the newly appointed Geezer of The Peckham Irregulars (or Reliant Robins, they still weren’t sure which sounded better). Rodknee’s joy began to ebb as Del brought forth what seemed to be nothing more than a folded piece of cloth with the words, Harpy Birthday on the front along with what Rodknee assumed was meant to be a charcoal sketch of a fearsome creature ‘comically’ wearing a hat. Del proffered the item, “It’s my latest scheme ain’t it Rodders, Day of Birth cards!” As Del went into a long explanation of what Rodknee thought to be a very simple premise not warranting any explanation his joy evaporated completely, he gazed longingly out the window and thought what could he actually do to celebrate his ‘Day of Birth’.

Hours later, Del having returned to his big raised hut in the centre of ‘town’, Rodknee was getting dressed up. Del had in fact as well given him a few coin to go and have some fun, not just the useless piece of folded in half cloth. So, Rodknee, Trigger and someone called Dave (who no one quite knew) along with six yoofs (the young and impressionable of Peckham) were off ‘clubbing’. The new ‘clubbing’ anyways, the old type being banned due to too many injuries and not enough wooden clubs. The new ‘clubbing’ was much more up Rodknee’s path - drinking watered-down, cheap ale with mead chasers, generally being ‘On the lash’ (again the new type with no actual lash), and hopefully ‘On the Pull’ as well (also new, much more reciprocal, like tug of war, than the one sided ‘pulling’ of old).

As befitting any young and impressionable Halflings out celebrating their day of birth, by midnight the money was gone, the chicken-in-a-basket clucking loudly and the two Towie girls they’d successfully ‘pulled’ were beginning to grumble that it was getting a bit nippy. The Towie girls, Cassandra - a little Boche Halfling with flaming red hair and a temper to match (little being her vertical status, her horizontal status being best described as big boned, if you get what I mean) and Miranda - a rather older, and more motherly character, also quite well off in the bones department – were both wearing the traditional folk outfits of a Towie and Rodknee thought it was no bloody surprise they were cold. Decked in nothing but leopard or zebra skin bikinis (Rodknee wsn’t sure which) and a lot of woad makeup all in all giving them a ruddy orange glow that by this time of night had deteriorated into nothing more than a brown staining around their eyes giving the impression that they had in fact been ‘pulled’ in the old fashioned way or at least had a fight over a yoof/drink/key-bab (the last being a Strange type of Skirtan food that had slowly been spreading through Halfling lands since the Nomans came).

As they make their way back home across barren and open countryside brightly lit in the full moonlight they are spotted by a pair or Legionares out on night patrol, actually the same two Legionares that took part in the earlier Parley Vous Boche scenario and have been on continual night patrol ever since on the very special orders of Bouccie. Seeing the distinctive profile of Rodknee (somewhat tall, somewhat slim and somewhat weedy) they decide to give him a ‘good kicking’ in payment for the punishment they have had to endure.

The Peckham Irregulars, after their night of revelrie (well, what would have been a night of revlerie if Rodknee knew what revelrie was) are in no state for a full-on engagement with these two fully armed and angry Nomans so, aided and abetted by the alcohol running through them) decide to taunt the Nomans with chants primarily calling into question the marital status of their mothers and to throw the odd stone or two.

The small hillock that dominates this particular clearing is very well equipped with both large (33 calibre) throwing discs and the smaller (45 calibre) or ‘singles’ throwing disc.

The chanting, abuse and throwing begins and just further infuriates the two Legionares. Who by now are very angry.

The Nomans, having no ranged weapons, have to slowly advance, their huge shields deflecting most of the hurled rocks. But with every move they get closer, and closer. If they ever get within charge, range, I wouldn’t like to be a Boche Halfling, particularly a Boche Halfling with a sore head after drinking too much.
Forces;

The Eight Boche Yoofs (ignore Dave - every else did) and the two Towie Strumpets are situated on the slight rise, a small hillock. Only Casandra is armed, she has a small hunting knife situated in her designer clutch bag, her dear old mum had taught her well – "If anyone of those raving loonies ever tries to interfere with your 'onour, let them feel this little prick.”

The Noman legionares are dressed in full segmented armour have shields and short swords, but no pilums.

If the Boche can knock out either of the Legionares (nobody dies in this scenario) then it is a moral victory for the Halflings.

However, if the Legionares should get their hands on Rodknee – well let’s just say that he won’t be looking for another date with Cassandra for some time.

Towie Strumpets can look forward to some ‘rumpy-pumpy’ if the Halflings should achieve a victory, no such luck if the Legionares should win as the Boche will reject all chivalry and run like hell until they get back to their own camp.

The scenario developed from a simple solo adventure in which I wanted to test the Pax-Bochemannica ranged weapons mechanics, can Boche yoofs actually win against heavily armoured Legionares by just hurling abuse and the odd stone?

Historical references state that Archers and Slingers are rare in a Romano-Germanic, Barbarian army, however the throwing of stones by Youths is common. These same youths will break off from combat if engaged in hand-to-hand combat.