A Panzerfäuste Adventure by Matthew Hartley 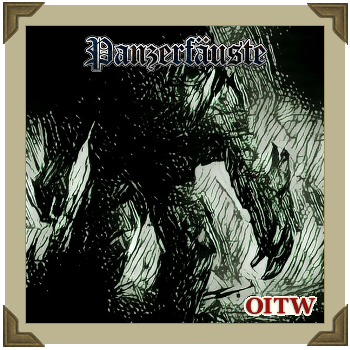 A surviving unit of shell-shocked troops struggle to survive as the pain felt by The Land is made manifest in this Panzerfäuste scenario for Solitaire or Group play written by one of the games' creators.

The Land is a land is ravaged by war; its crops turned to muddy ruin; its farmland soaked with the effluvia of corpses; its rivers now red and sinking. The songbirds are silent, the livestock bloats in the fields, and shattered soldiers lay moaning amongst the happier dead. The misery, pain, and despair of the fallen warriors is absorbed and then reflected by the wounded earth. Their distress seeps through the soil awakening the primordial spirits of nature, sorely abused, and so fear takes form within the ground and rises up to put an end to its tormentors.

The game can be played either solo or with two opposing sides and a third force (The Fear).

The game is best suited for a simple squad a player game without heavy weapons, special equipment or vehicles.

Ideally the game area should be four feet square and comprise of ruined builds, flooded shell holes and trenches, shattered woods and lots of mud.

In a one player game the players sets up his forces in the centre of the table. In a two player game, the player’s forces are on reconnaissance and enter the table from opposite table sides.

In either case, the game ends when all the Fears are destroyed or all the living figures have left the table.

The Fear is a (very, very angry) earth spirit made manifest from the soil. It is best represented on the table by a vaguely humanoid lump of modelling clay or similar.

The Fear has a starting GUTs value of 9, however it does not have to make GUTS rolls to move and gains and loses GUTS during game depending on the success or failure of the active players GUTS rolls.

The Fear will automatically move d6 inches towards to nearest living creature each turn. It ignores all movement penalties for terrain.

The Fear does not engage in missile combat but does fight in melee combat, inflicting damage as normal

The Fear cannot be destroyed by weapons or as a result of melee combat, however The Fear draws its energy (GUTS) from the emotions of the living soldiers around it.

Each unsuccessful GUTs roll by a living figure within 12 inches of The Fear increases its GUTS total by 1, each successful GUTS roll reduces the Guts total by 1. A critical success will reduce the Fear’s Guts by 2, a critical failure will result in a new Fear (see below). The reason for the Guts roll (movement, shooting or something else) is irrelevant, successes reduce The Fear, failures enhance it.

At the end of the Turn, if The Fear has a Guts total of 10 or higher it divides into two new Fears, with new Guts total’s equal to half the original GUTS total plus 1.

If a living figure suffers a critical failure on any GUTs roll, a new Fear is created immediately; it is placed next to the figure and has a GUTs total of 9.