"A Grand Day Out"

A Flintloque Scenario by James White 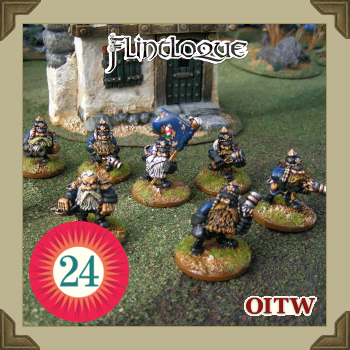 It is a warm summer’s day in Hünözwersburg, a state of the grand Confederation of Finklestein and life seems grand for the Colonello Aldimannio of the 8° Principo Tadio Polo regimenta di linea. The sun is beaming down on this little patch of Valon, they have been stationed to guard the bridge across this river and the opportunistic Todoroni among his regiment have already begun wading among the reeds and catching flies for their dinner. Life is good, mere months ago, his regiment went from digging latrines for the Grande Armee du Norde to a frantic and well-fought escape from through the Witchlands and Diberia. Marshall Mouratte himself awarded Aldimannio a large shiny medal for his bravery (cast in pewter, but don’t tell him that) and sent him on this very mission. Mouratte has since then been on a short trip into the depths of the Confederation for reasons unknown to the Colonello, but he did not care much for the reason. All he knew was that he has to stay put and guard this bridge to ensure the Marshal’s safe return to the Kingdom of Nepolise.

This deep into the Confederation, this task is simple. Earlier on, Aldimannio sent a small troop of Todoroni to scout the area for any potential risks and they came back relaying that the area was safe. It’s quite likely that the Todoroni he sent out scouting ended up in the local hamlet looking for wine and women and returned without a proper inspection of the area.

What the Colonello did not know was that the area may be safe and that there appeared not to be any combatants in the area, but there was a ford further down the river and that ford was as yet, unguarded. A troupe of Uhlans of the Krautian League had been staying in the local hamlet and, having overheard the mouthy Todoroni scouts, readied themselves for an attack on the Regimenta. After the return of his scouts, it wouldn’t be long before the Colonello and his regimenta heard the hellish grunting of the stocky Krautian pigs and the course grumbling of their Dwarven riders. Before the Colonello could gather his troops, and command them to ready their muskets, a gathering of Dwarves had taken the ford and a number more were riding hard to the Todoroni position, with lances levelled howling and grunting with glee at the thought of such a simple folly. If all went well for the Krautians here, they knew from Dwarven spies in Finklestein that Mouratte’s pretty little head would soon be theirs for the taking.

This scenario sets a unit of well seasoned, but not particularly well trained, Todoroni Militia against a unit of elite Dwarf Uhlans. The Todoroni are unprepared and have spent much of the day lazing in the sun, the Dwarves have been informed of the situation and have waited to strike. The Colonello needs to defend the bridge, but also capture the Ford and make sure the way is clear for the High Elf Marshal, Mouratte. The Dwarves must hold the ford and capture the bridge, but are conscious that the Todoroni may make good use of the river.

This scenario was written with the Flintloque Rules from Grapeshotte 1st edition (1997) in mind. The rules for Todoroni are omitted from Grapeshotte, but can be found in Issue number 9 of Orcs in the Hills magazine.

You are Colonello Aldimannio of the 8° Principo Tadio Polo regimenta di linea. You and your men did not expect to be fighting anything today. Many of the Todoroni are merry with Nepolisian wine or sleepy from lounging in the sun, wading in the gentle current of the river and catching more flies than their stomachs would usually allow. The enemy has surprised you and your men have ill-informed you of the local terrain.

Whilst it is very important to protect the bridge itself at all costs, you are also close to promotion to the Cotechino Guarda and this means a great deal to you. You know that the incompetence of your men for not reporting the ford will fall down to you, so you really must have the Krautians wiped out before the Marshal arrives. That said, your troops are not in this fight for the same reasons as you and may simply run, they are Todoroni latrine-diggers, afterall…

The unit is MILITIA.

COLONELLO ALDIMANNIO: a Veteran Little Todoroni armed with a High Elf Duelling Pistol and Sword. He earned a shiny medal after fighting a rearguard through the Witchlands and Diberia and is en route to promotion. He will fight hard in this battle and receives a +1 modifier to Morale and may reroll a failed morale test once per game. He ignores the usual -1 modifier to Morale that all Todoroni suffer.

SERGENTE RIBBITSIONI: an Experienced Big Todoroni armed with a Halberd. He is the biggest of the Regimenta and receives a +1 Hand-to-hand modifier in his first round of melee.

SOLDATO NEWTONIO: an Average Little Todoroni armed with a Musket and Bayonet.

SOLDATO ECLAIRE: an Average Little Todoroni armed with a Musket and Bayonet. Quite why he has an Armorican surname is a well-guarded secret, but he also has magical ability (roll before play).

SOLDATO BLICKSIONI: an Average Little Todoroni armed with a Musket and Bayonet.

SOLDATO NDUJA: an Average Little Todoroni armed with a Musket and Bayonet. He has an affinity for Pork products, so receives a +1 modifier to Shooting and Hand-to-Hand if his target is mounted on a Pig.

SOLDATO ENTFISCHIO: an Average Little Todoroni armed with a Sword. He has an ability to ‘sing to the trees’ and make them move… In a turn where Soldato Entfischio does nothing else and is unengaged, he may attempt to sing to a tree and make it move. There is a 50% chance on D100 that a tree within 30cm of Soldato Entfischio may move up to 10cm in any direction Entfischio chooses. The tree may not move through or end its move on or in terrain or models.

SOLDATO MALARDIO: an Average Little Todoroni armed with a Sword. He is wise beyond his years and carries the Regimental Banner which he carried the whole way back through the Witch-lands and Diberia. Friendly models within 10cm of Malardio receive a +1 modifier to Morale (which cancels out the usual -1 modifier to Morale that all Todoroni suffer).

SOLDATO GABINETTO: a Raw Little Todoroni armed with a Musket and Bayonet.

SOLDATO ANSELMO: an Experienced Big Todoroni armed with a Musket and Bayonet. Anselmo is a thoroughly unsavoury character, rumoured to have links with the Tapioca family in Nepolise. If he kills a model in hand-to-hand combat, he must stop and strip the body clean of any valuables for a full turn. The turn after he kills a model in Hand-to-hand combat, he cannot choose to perform any actions (but may still defend himself in Hand-to-hand against other models, or perform actions from failed morale checks). He is a ruthless killer though and receives a +2 modifier to Hand-to-hand when attacking a model in the side or rear.

SOLDATO BASSANI: an Average Big Todoroni armed with a Musket and Bayonet. He has seen things in the Witch-lands that no Todoroni should ever have to see. Any successful morale check must be rerolled. A successful reroll does not have to be rerolled.

You are Kaptain Thorsgrimm von Frübrest of the 3rd (Öst Krautia) Uhlan Regiment and you have fought on both sides of this war. Your heart and the hearts of your men lay with the Kaiser and you hate Morded and his High Elven kinsfolk. You and your men have mastered blending in with the locals and you are part of a large network of Krautian spies working behind enemy lines in the Confederation of Finklestein. You were just passing through Hünözwersburg when you overheard that Marshal Mouratte would be passing back through this way. You cannot miss this opportunity, but you must first clear the way for your ambush by slaughtering a group of Todoroni gathered by the bridge across the river.

You must hold the ford and the bridge. You must also ensure that all of the Todoroni in the area are dead or have fled by the time Mouratte arrives.

The Unit is ELITE.

KAPTAIN THORGRIMM VON FRÜBREST: a Veteran Dwarf armed with a Sword and Pistol, mounted on a Pig (treat as heavy cavalry).

FELDWEBEL R. SCHMIDT-OWEN III: an Experienced Dwarf, armed with a lance and Mk. II Dwarf Musket and mounted on a Pig.

OBERSCHÜTZE BARNI BIGGENKONKEN: an Average Dwarf, armed with a lance and Mk. II Dwarf Musket and mounted on a Pig.

SCHÜTZE SIGURD VON SCHEISSERBURG: an Average Dwarf, armed with a lance and Mk. II Dwarf Musket and mounted on a Pig. Von Scheisserburg has magical ability (roll before play).

SCHÜTZE ULF HOLSTENPILS: an Average Dwarf, armed with a lance and mounted on a pig.

SCHÜTZE HANS LAUGENECKER: a Raw Dwarf, armed with a lance and mounted on a pig.

SCHÜTZE REINHARDT VON HEIDIHEI: a Raw Dwarf, armed with a lance and mounted on a pig. He is a youngling and struggles to control his Pig. Every turn, before any other friendly models have moved, roll a D100. On a 0-10, the pig goes out of control and veers off! The opposing player may now move Reinhardt as if it was his own model for this turn only. After Reinhardt has moved, the Dwarf player may resume their movement. If veering ‘out of control’ brings him within 2cm of a friendly model at the end of the movement phase, carry out a hand-to-hand combat between the two models. Reinhardt receives no modifiers to the dice roll and the opposing model cannot damage Reinhardt if he wins combat. However, if Reinhardt wins combat, any damage which goes through will damage the ‘opposing’ friendly model.

Todoroni Minor Victory: The Bridge is occupied by more Todoroni than Dwarves by Turn 10.

Todoroni Major Victory: The Bridge and Ford are occupied by more Todoroni than Dwarves by Turn 10.

Dwarf Minor Victory: The Bridge and Ford are occupied by more Dwarves than Todoroni by Turn 10.

Dwarf Major Victory: The Todoroni have been entirely wiped out or fled by Turn 10.

The game is played on a 6’ x 4’ table and should represent a lush green landscape in the summer. The North and south edges are 6’ long. The East and West edges are 4’ long.

To the North East is a hamlet of small Dwarven houses, taverns and farmhouses. Stone walls, barrels and crates litter the streets of the hamlet. The population have heard the kerfuffle and gone into hiding. They will not get involved in the brawl.

The rest of the board should be dotted with Fir Trees and rocky outcrops. Small, gentle hills are also perfectly acceptable if you choose!