This time with particular apologies to everyone who has chosen to put up with this madness. 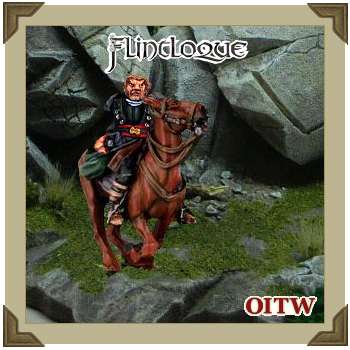 Sharke and Harpie and a group of mounted Rohziri, encumbered with children and slow going old folk, must survive  a fierce attack by the wolfriding Gnolls of Isenpore if they are to make it safely to the the defenses at Wadi Topi in this mounted skirmish scenario for Flintloque.

You can read last years tale, "Sharke's Quarry" right here on OITW by clicking on this link. Craig, Editor

And so, without further ado...

Sharke grinned in approval. Old, Siddhaantmaand, Badshah of Rohanistan, might be. But he could be a right b*st*rd when roused.

Since traveling to the Badshah Siddhaantmaand’s encampment after the abortive attempt to rescue Balifine and Qatar *, events had been proceeding at a rapid pace.

Advised of the treachery of the Governor Sourorc Wallah at Isenpore, the Badshah had emerged from his funk and then had to make some tough decisions. First, he exiled Greema Keedajeebh from his court. Keedajeebh had been the one insisting that Governor Sourorc Wallah was a friend of the Rohziri, clouding the Badshah’s mind to all the evil wrought in the Governor’s name.

Next the Badshah turned to matters of strategy. The Bheria Sardar, the “Wolf Lords” were nomads. Their fighting goblins could harass the treacherous rebel sepoys in the open steppe but…that same opens steppe would provide no protection for the Badshah’s folk and flocks. To lose them would make any battlefield victory taste like ash in his warriors’ maws.

No, his first priority must be to safeguard the Folk. Orders were issued. Riders were sent out to recall the bands of warriors scattered all over the Land.

At Government House, Isenpore, Greema Keedajeebh entered the chambers of his true master. The Governor General was poring over maps spread out on the table before him. An ornately uniformed officer, clearly a cavalry rat, sat on a camp stool by the table.

“All was going well until four strangers entered the camp; an Elf, a Dwarf, a Bog Orc and a Half Orc”.

“You stink of wolf.”, Sourorc quipped derisively. “The Half Elf. Was he from Gondoristan”

“No, From Urop. One of the 101st Rifles I took him to be, though his uniform was shabby, and yet he bore an exquisite telescope purportedly made by Mathew Burgorc”.

Greema Keedajeebh felt the need to elaborate on his master’s plan: “Siddhaantmaand will not stay out on the plains. His court is vulnerable. He knows this. He will expect an attack on his camp.

“They will flee to Wadi Topi, the great fortress of Rohanistan. It is a dangerous road to take through mountain passes. They will be slow. They will have wogoblins and sprogs with them”.

Sourorc turned to the Rat officer who had remained silent throughout the council.

“Send our your Gnoll Riders”.

The Rat rose, saluted and smartly turned about, exiting the room.

Sharke cursed. The column of Rohziri, encumbered with sprogs and old folk was slow. Too slow.

The Folk had been ordered to break down the camp and head for the defenses at Wadi Topi. Wadi Topi was a narrowing valley, a gash carved out of the living rock as if hewn by a giant tulwar. Its natural defenses were enhanced by a goblin made dike, and behind that a hill fort. It was said to be the m0st easily defended place in Rohanistan. However, the very features that made it so easily defended made it a trap for its defenders as well. Once inside a much larger force could be resisted for a time, but there would be no escape if the attackers could not be repelled.

“B*gg*r”, thought Sharke. “This saddle is none too comfortable, and I’ve been in it for days now”.

True the Badshah had been happy to replace the red riding wolves supplied to Sharke’s party with some horses from the herds. Why anyone would prefer to ride a meat animal over a wolf was beyond him. “Strange folk these Uropeans” he thought.

“Queer b*st*rds these gobbos. Eating horses instead of riding them” Sharke said to Harpie, his Bog Orc Giant of a Serjeant.

“Sentinel Save Guinalea, Sohr, we have eaten a fair few horses ourselves, sure and we have”.

“True Pat, true. But only after they were no good for riding anymore”.

Harpie couldn’t argue with that.

Just then their conversation was interrupted by a snarling howl in the distance...

Riekard Sharke (Section Leader): Mounted on a horse. Official game stats for Sharke are available from Alternative Armies. However, to get you up and running if you do not have access to those stats just treat Sharke as a Legendary (if not Sharke than whom?) Elite Light Infantry Orc armed with an Exquisite Sword and a Bakur Rifle.

Harpie: Mounted on a horse. As with Sharke, if you do not have the official stats handy, treat Harpie as a Veteran Elite Light Infantry Bog Orc armed with a Seven Barrel Volley Gun and a Knife.

Bows: The Goblins of the Gobla Kush use fairly rudimentary bows. These weapons have a good rate of fire but lack hitting power and frankly the number of arrows one can comfortably carry is a bit on the low side.

Stats: 0-15 cm, 60/3, 15-30 cm 40/2. Bows may fire once every turn (no need to reload) but any result of doubles means the bow has either broken or the archer has run out of arrows. The figure discards the bow and fights on with its secondary weapon. Bows cost 4 points.

Amour: Grants the wearer +1 to Steady vs. melee attacks only. Note that this differs from Qatar’s Mithril Hauberk, which, being an of an altogether more effective material and construction offers +3 to Steady vs. both fire and melee attacks. Armour costs 2 points.

Shields: The tough Giant Yak hide shields of the Gobla Kush region not only protect from the blows of melee weapons, they have even been known to deflect musket balls. Shields give the bearer +1 to Steady vs. all attacks. Shields cost 3 points.

Note that a figure with two or fewer arms, tentacles, or similar prehensile appendages, cannot use a bow and a shield at the same time. Although both could be carried the bow would have to be set aside before the shield could be used.

Scenario Map and Set up

This scenario plays out on a 4’ x 6’ surface (120cm x 180cm). Will work fine on a smaller or larger playing surface, although I suggest 4’x4’ as a minimum due to the movement rates of mounted figures.

The table consists of rolling grass lands dotted with line of sight blocking rock outcroppings as desired. See the Peter Jackson films, or even just photos of The Rock and Pillar Range, Otago New Zealand to get the idea.

This is a desperate cavalry skirmish. The game lasts for 12 turns or until only one side has troops on the table. If at any point only one side has troops in play, that side wins immediately. If, at the end of the 12th turn both sides have troops in play, then the Sharke player wins if both Sharke and the Badshah are still in play. Otherwise the Isenpore player wins.

Optional: Wolfriders: A goblin and his wolf are not a cavalry model, they are a warrior team. A goblin raises his grey wolf from a pup and the wolf will allow no other to ride it. For his part the goblin will never fight on foot so long as his wolf lives.

In play the goblin and wolf must be activated together at a cost of two activations. That is to say that when it’s the wolfrider’s turn to activate figures he or she must spend both activations on a goblin and his wolf.

Once activated the goblin may fire OR attack in melee, either before or after the wolf has moved. The wolf may move up to its Double March rate, and/or conduct a melee attack.

A single figure in melee with a goblin and his wolf counts as outnumbered.

When fired at, any shot has a chance to hit either the goblin or his wolf. The goblin is hit on a roll of 1-4, and the wolf on a result of 5-10. If either is removed from play due to combat the other remains in play and is given a Shaken token.

If the optional Wolfriders rule is used, apply it to Gnolls and their riders as well. Gnolls can act just as wolves due treating their Tough score of 3 as their Steady score. As with wolves, Discipline is N/A.

Players are free to forego the complication involved (that’s why these rules are optional), and treat wolves just like any other mount, using their Steady as their Tough. I feel it is important to offer both options as allowing the wolves to act as characters but not giving the gnolls the same abilities seems off.

It was a somewhat reduced and tattered column that rode into Wadi Topi the next day. Both goblins and wolves were exhausted and many were wounded as well.

Against this backdrop of exhaustion Gallas and Himli could be heard arguing over who had killed the most Ottermen in yesterday’s fight.

“Bl**ding nutters”, Sharke thought, and not for the first time.

This article was written exclusively for Orcs in the Webbe and was first published on the 11th December 2017 as part of its 2017 Advent Calendar.