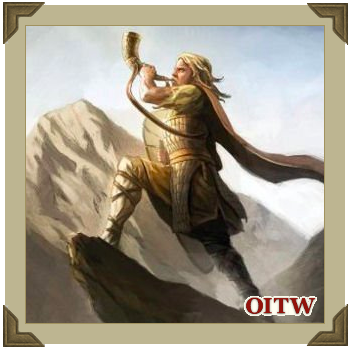 Continuing the tradition of bringing you a tale of terror on All Hallow's Eve, Tony Harwood tells us of three Ferach officers vying for the hand of a General's daughter using nefarious means...

As l’autumne drew to a close and the Ferach Armie of the Sud began to think about laying-in provisions for the cold Catalucian winter, officers of the 2eme Regiment de Ligne grew restless and numerous scuffles were reported to the Gendarmes. With so many brothers-in-arms ending up with minor injuries, usually obtained from duelling, the army commanders began to devise activities that would keep the soldiers and in particular the cooped-up officers occupied.

A favourite activity was the hunting of wild boar and makeshift hunting parties were set up all across the plains of Catalucia. One particular hunting party was a group of three ambitious Armorican Elves who although members of the same regiment had continued a bitter rivalry – rivalry for the hand of the Generals daughter. The feuding had got worse when the said daughter had come of age and was to be wedded off to one of the three protagonists as the Regimental General thought it best that his only daughter be wedded to the regiment just as her weak-willed mother had been.

Over many bottles of red wine a challenge was agreed. The officer who successfully hunted down the huge wild boar that was terrorising the local villages would secure the hand in marriage of the Generals daughter. A simple plan, but as we know simple plans have a way of going awry.

The first Ferach Officer a cunning thinker, called Jaques thought it wise to purchase the services of a local witch who gave Jaques a magical spear with which - she promised - even the largest of wild boars would easily succumb.

The second officer, named Louis also thought it worthwhile to improve his chances and after consulting with a travelling wine seller purchased a flask of his most potent fortified wine. A wine guaranteed to put anyone who drank it to sleep for some considerable time.

Then the third officer - a ruthless rogue by the name of Victor who sought out a soothsayer who sold him a magic looking-glass, through which Victor could follow the trials and travels of his two compatriots or as he saw them – adversaries!

On day one the three officers started the days hunting together but quickly slipped into three lone parties and soon Jaques, the better hunter of the three, had spotted the giant boar and started to stalk his prize. The spear worked just as the witch had promised and on the very first throw the boar was killed with a blow to the chest.

After gutting the boar, Jaques used the spear as a spit to drag the huge boar back to camp. On his way there he met with Louis who hiding his envy well, suggested that they drink a toast to Jaques’ good fortune as he just happened to have a flask of wine on his person. Louis pretended to drink, but made sure that none of the heady liquid passed his lips. Jaques, who was a more trusting individual, enjoyed many glasses of the rich wine and was very soon feeling groggy and tired. As he lay down and fell asleep Louis took a large boulder and smashed-in the head of his would-be rival. Leaving the body for the wild animals of the forest to dispose of, he then started his long journey back to camp.

The third officer, Victor, used his enchanted looking-glass to predict the path that Louis would take back to the regiment and set a trap for his rival by waiting near a small stone bridge. As Louis approached, Victor hid behind a wall and then when Louis was close enough - he shot him with his carbine. Placing the dead body under the bridge and making off with the boar’s carcass Victor marched back to a hero’s welcome and the hand of the Generals daughter.

The wedding of Victor to the Generals daughter was a grand affair and even though there was much drinking and revelry, the squabbling and in-fighting that the regiment had previously experienced subsided and all was now peaceful.

And there would end this tale but for a cruel twist.

Unfortunately Victor neglected to take with him the prized looking-glass and left it with the dead Ferach officer.

Later the following year a shepherd was picking through some bones that he found lying under an old stone bridge and spotted a weathered looking-glass which he placed it in his pack. The shepherd chose the largest of the bones to carve a reed for his old Oliphant horn and by the time he had walked into town he was ready to start playing.

On the first blow of the horn, something quite extraordinary happened. Instead of sweet music, the instrument began to wail.

"Ah! Dear shepherd, you are blowing your horn
With one of my bones, which night and morn
Lie still unburied, beneath the wave
Where I was thrown in a sandy grave.
I killed the hero, who slew the wild boar,
Taking from him his rightly whore,
And my brother officer killed me,
Gaining the Generals daughter by pretending 'twas me."

As you can image, this strange tale was soon repeated across the whole of Catalucia with reports published in regional broadsheets and newsletters. A certain general heard of the story and summoned the young shepherd to his camp where the rough horn repeated the same lament.

Victor pleaded not guilty and demanded satisfaction against this poor defenceless shepherd, who having no military training would have fared badly if a duel had been arranged. However he did have this: and produced the weathered looking-glass which instead of showing the future, peered back into the past and illuminated the story as detailed above. The General in a fit of fury, slashed at the be-fuddled Victor and in one swipe of his sword cut off the head of his new son-in-law in front of the whole regiments and his now-grieving daughter.

And the lowly shepherd was rewarded with gold and gifts as well as the hand of the newly widowed Generals daughter.

The looking-glass was kept by the General who used it for his own gain until one day he had the miss-fortune to drop it and smash it. Resulting in seven years of (very) bad luck.

There are a number of special items mentioned throughout this short story – items that could be used in your own games of Flintloque or Slaughterloo. Here are some suggested rules for using them.

A rather plain looking weapon with a wooden shaft and an engraved spearhead. Used as a regimental prize offering +1 (move 1 column) for musket accuracy across the whole regiment while the spear is kept safe.

This particular flask is long gone, but similar bottles (or casks) can have the same effects on Orc and Ferach alike. A great objective for use in Flintloque skirmish games.

Predict the future, by a couple of days, but can also be useful for the setting of traps. There is a 5% chance of it breaking each time it is used and if this happens then there should be a suitable period of very bad luck for the owner/user.

If you could ‘persuade’ the young shepherd to part with his horn, then there are a couple of options worth looking at. Firstly: it could replace the regimental horn and if used by an Elven force blow rousing marches at the head of a blue-coated Ferach column. If used by an Orc regiment the effect might have a slightly different effect! Secondly; it could be of great use to an Un-Dead force leader who would pay handsomely for such an interesting artefact.

A small stone bridge haunted by a long dead, Ferach officer. Not sure how I would quantify the gaming effects, but as a unique story-line there could be some interesting gaming scenarios.

The tale is not original, but an amalgamation of a number of classical folk tales. I enjoyed adding the quirky ‘Flintloque’ references and some ‘All Hallow’s Eve’ overtones for this very special day. I hope that you enjoy it.

This article was written exclusively for Orcs in the Webbe and was first published on All Hallow's Eve, the 31st October, 2018.