General Banal and The Plot to Assassinate d’Elrond

"General Banal and The Plot to Assassinate d’Elrond"

This one is a bit light on apologies although an obvious nod to both J. R. R. Tolkein, and fans of Hugo Weaving may be in order. Also, any Bonapartists who feel Napoleon was justified in the extrajudicial murder of the Duc d’Enghien may be a bit miffed. So be it. 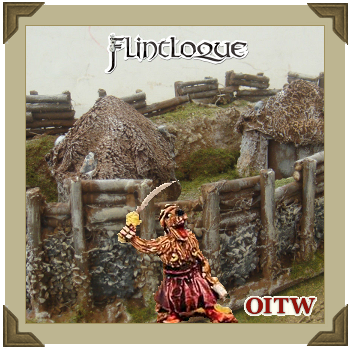 General Banal and his Othari Pindari attempt to assassinate Duc d’Elrond in this Flintloque scenario for two players set in the mysterious continent oif Inji.

“It will be as you wish General sahib”.

The swarthy otterman clutched the bag of coin tightly in his gnarled paw.

The Elf, clad in mufti, to avoid attention, considered this and spoke.

“While I do not doubt your sincerity, mon ami Wesil, I must witness these events myself. This troublesome counter revolutionary slipped from my grasp once before. It will not happen again”.

“As you say, so shall it be done, sahib. My companions are ready and we will strike tonight”.

Not for the first time, General Banal reflected on the doleful state of affairs that had brought him from the Rivière de Couenne all the way to the Gobla Kush in Inji. Curse all dwarves and their baked goods! The raid on Ettinheim in Beerdan had ended poorly*. Only the intervention of the Inn’s dwarven bakers and their…their…creations…had allowed that cursed Royalist Louie Paon Confit, Duc d'Elrond to escape capture and the date with the firing squad he so richly deserved.

The Duc d’Elrond had risen with the sun as was his habit. The lithe noble elf looked down the craggy valley of Imladris towards the fast flowing Fasipani. As he sipped his coffee (émigré he might be, but he was still Amorican!), his thoughts drifted to how he had come to be here.

When the Usurper Mordred seized power those many years ago, d’Elrond had been offered a post in the new regime. Seeing this as simply a means by which the Usurper sought to legitimize his reign, the Duke fled in the night rather than compromise his Honour. No, d’Elrond could never support a usurper and would-be regicide.

In the pre-dawn darkness the wily Pindari had crept past the guard set on the crossing of the Fasipani. Wrapped in sheep’s bladder his lethal burden had remained dry.

D’Elrond had set himself up in Ettinheim, just across the border in Beerdan. There he had written the Government of Albion, requesting a commission in their army in the hopes that he might play a small part in restoring the rule of the Empress Morganna in a manner suited to one of his august lineage. His offer had been declined, although His Majesty’s Government did see fit to offer a stipend against the day when his services might come in useful.

Then Generals Pikachu and Doremi tried to assassinate Mordred. In the wake of their failed attempt, Mordred grew enraged…and just a little paranoid. It is rumored that Tillyrandy whispered in Mordred’s ear that d’Elrond was among the plotters.

It was nearly dawn. Slithering like Brother Snake, the Pindari crept closer to his target.

Imagine! The very thought that Louie Paon Confit, Duc d'Elrond, paragon of Amorican virtue would have aught to do with assassination was well beyond the pale.

And yet Mordred was receptive.

Soon it transpired that General Banal had been dispatched to enter Beerdan illegally and capture d’Elrond. By the narrowest of margins, the Duke had escaped the trap*.

He could smell the breakfast fires. Hear the first stirrings of daily life in Imladris. Once he even had to dodge as a chamber pot was tipped over the wall above.

With Urop no longer safe, d’Elrond fled to the very frontier of Inji, and it was then he had built the Last Émigré House East of the Sea. Now, in this sheltered valley, displaced Amoricans could gather amidst convivial companions without fear, well beyond the reach of the Tyrant.

At this, his thoughts were unceremoniously broken by the sound of an explosion followed quickly by shouts and musketry drifting up from the pine woods below…

General Banal’s Pindari must eliminate the Duc d’Elrond from play. The General will double the Pindar’s fees if they eliminate very elf in d’Dlrond’s retinue.

Louie Paon Confit, Duc d'Elrond’s retinue must fight off the Pindari and ensure the safety of the Duc and Duchesse.

Pindari: General Banal has hired a section of 12 Othari Pindari.

All but one figure from this section may begin play mounted on gnolls. See special rules below.

Émigrés: Duc d'Elrond has gathered a small force of Ferach ex-pats to his hill fort, The Last Émigré House West of the Sea.

This section represents those who survived the mine that demolished the compound’s gate.

Points values have been provided should players wish to compile their own versions of these sections.

The game takes place on a 120cm x 180cm surface representing the approaches to the The Last Émigré House. As you can see from the map below, the game could easily be fit on a 90cm x 150cm surface by leaving off the river to the south and lake to the east. 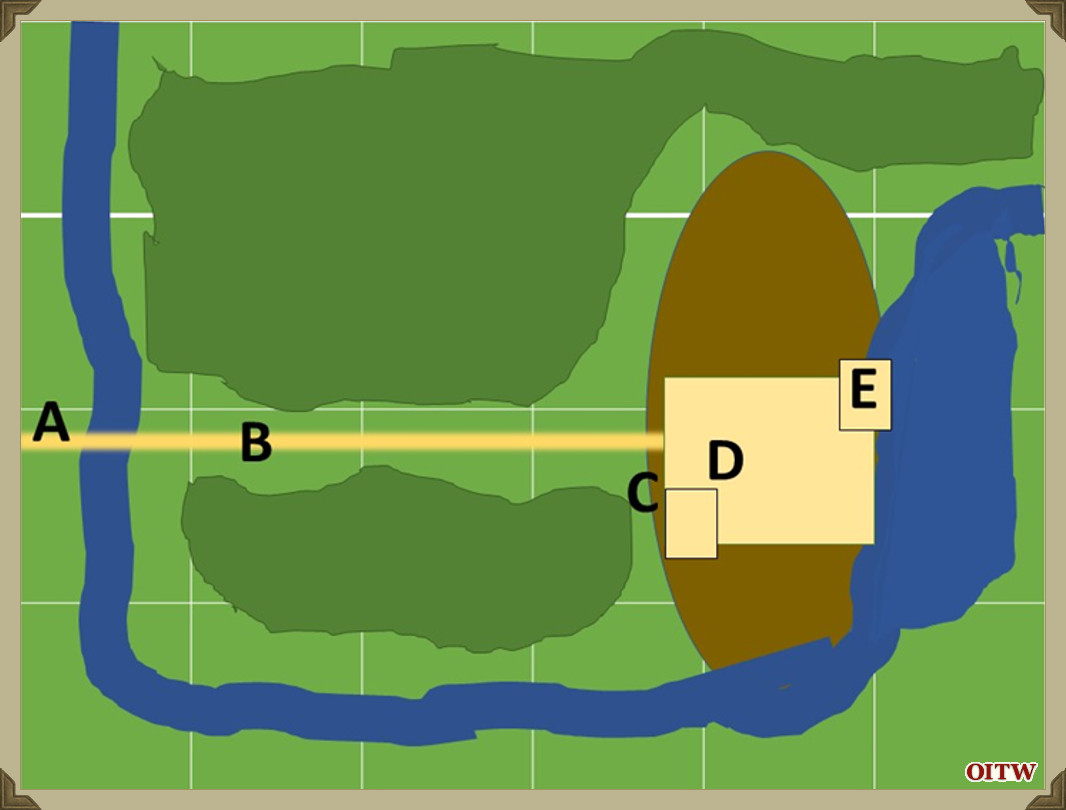 The river Fasipani flows deep and fast and my only be crossed where the path crosses via a bridge, between A and B on the map. The path is flanked by dense woods that provide heavy cover and count as difficult terrain. The path travels up a hill and ends at the Last House, in reality one of the hill forts common to this part of Valon. The hill fort has tall walls that figures may not cross. Normally the hill fort compound would be secured by a thick gate, but the Pindari have set off a mine just before the start of play that has blown the gate to pieces. The hill fort may be entered by the main gateway with no additional movement costs.

Duc d’Elrond’s troops deploy first with four émigrés on sentry duty at point B, four more in the hill fort courtyard at D, and the Duc, Duchesse, and Yusuf atop the roof at E, enjoying their morning coffee.

General Banal’s troops deploy second. One Othari figure of the owning player’s choice is placed on foot at C. This figure may be armed with a spear, or with a jezail and sword. This is the brave chap that planted the mine. The remaining figures or the section are placed at A, ready to cross the bridge. These figures may begin the game mounted or on foot as desired.

Gnollriders: General Banal and his Othari have the option of starting the game mounted. Mounted Othari carry a spear, jezail, and sword. The jezail MAY NOT be used so long as the figure remains mounted. Riders may take action to dismount, in which case the gnoll is said to be wandering around avoiding danger and plays no further part in the game. Of course, riders will also be dismounted when their gnoll is hit and suffers wounds. In both cases the owning player must then declare whether the now dismounted Othari is armed with a spear or a jezail and sword, it does not carry all three weapons. With his pistol and sword, General Banal is armed the same on foot or mounted.

Exiting the Table: The table may only be exited from the west and east, the north and south being quite mountainous and impassable. Exiting from the west is simply a matter of crossing the bridge and moving off the table. Exiting from the east involves a plunge into the icy deeps of lake Fasipani. Any figure taking the plunge must roll 5 or less on the dice in order to survive the experience. In any event that figure is then removed from play. There isn’t much of an incentive for most of the figures to voluntarily leave the table, however the Duc and Duchesse may wish to exit in order to attempt a victory if things have gone pear shaped. Obviously, perhaps, the Duc must survive a plunge into the lake if he tries that mode of escape.

This article was written exclusively for Orcs in the Webbe and was first published on the 18th December 2017 as part of its 2017 Advent Calendar.