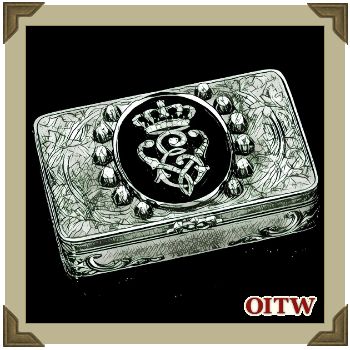 Continuing the tradition of bringing you a tale of terror on All Hallow's Eve, Tony Harwood tells us of a cursed snuff box that nearly destroyed the entire army of Albion...

By the time of the Mordredian Wars, the legend of the Cursed Snuffbox was little more than a fairy tale, a bedtime story told to naughty Orclings and miss-behaving children. In fact, so common was the tale that there were few who thought to take any care to believe the tales when buying or trading snuffboxes and I had thought it a waste of time retelling it here. However Craig suggested that there may be some Notables who are either unaware of the tale or have mysteriously forgotten it.

Legend states that in the time before Morderd stole the Peacock Throne and Black Powder was bought to the lands of Dwarf, Elf and Orc, there were many dark Demons abroad; one particularly cunning Demon found himself to be running short on his quota of captured souls and devised a cunning plan to secure a valuable and high ranking prize. He produced an ornate snuffbox, detailed with fine silver filigree, inset with dark crystals and containing the finest Alevian snuff. The box was sold to an Elf Noble for the princely sum of one thousand gold crowns and was an antiquity much coveted.

As with many Demon trinkets, this item had a cost to its owner...

Firstly, it was cursed. Bad luck and misfortune would follow the owned throughout his (or her, the box had no concern with the gender of it’s owner) life and if you died while owning the box, your soul became the property of the dark Demon. The box would then handed down to your next-of-kin and the curse would continue along your bloodline.

Secondly, you could not lose the box or give it away, if you were to try, it would always somehow make its way back to you and your miss-fortune was usually worsened.

Thirdly, the only way to pass on the box (and the curse) on was to sell it, but even in that there was a catch. You must sell it for less than you had bought it for. As you can imagine, over the years the value of the box kept going down as people rid themselves of the dreaded thing and was now pennies. In fact as you will read, even less than a single Kyng’s penny!

We rejoin the story of the Cursed Snuffbox as the Army of Albion was retreating to Korunna and the weary Red Coats were trekking through the inhospitable lands of Northern Algarvey. Foul-Mouth Freddy and his troop were once again partaking of local wines and harsh spirits when Kenny, who was always fond of his more esoteric tipple, found that he had no tobacco to roll or snuff to snort. His misfortune was overheard by a local merchant who, down on his luck, suggested that Kenny buy his last remaining supply of snuff for whatever Kenny could afford. Ever the ‘wheeler-dealer’ Kenny offered just one cenimos (a coin that was so worthless that it had been relegated to a simple child’s plaything). Even before the half joking words had left Kenny’s lips, the merchant grabbed the single coin and handed Kenny a rather battered snuffbox before hurriedly making his way to the door at some pace and which point he called over his shoulder, “You can keep the case – call it a bonus”.

I think we can all see where this story is going!

Now at this stage I have to state that I am NOT saying that ALL of the ills that beset the retreating Red Coats in the retreat to Korunna were down to a simple snuff box carried by a certain Kenny, but you have to admit that the sheer number of misfortunes that rained-down on this army during the march was more than would have been naturally expected to befall it and, as you will read, once the snuffbox was ‘sold-on’ then the positive luck of the whole army changed, quite dramatically.

But I’m getting ahead of myself, back to the story...

Freddy was his usual bad tempered and foul mouthed self (some things never change). The marching troops found foraging harder, the climate less welcoming and the paths more worn with many ending in a blocked landfall necessitating a long and arduous detours. Day after day bad luck dogged the soldiers and morale was getting worse. Freddy did all he could to keep the Orcs moving (by ALL I actually mean that he kicked more, yelled louder and swore even more). During this time Kenny had chance to examine the snuff box and was amazed to see that as he used it and polished it that it was indeed  a fine piece of superbly crafted silverwork with dark jewels that shone with a blue-black glint.

Kenny thought it best to keep these details to himself and it was many days before any in the group saw the silver snuffbox. Of course once it was seen, a thing of such beauty (actually such value, the mind of most Red Coated Orcs had forgotten beauty long before the war) was not something that could be kept secret for long. Soldiers wanted to see the box and once seen they coveted it and plotted ways in which they could possess it. Obviously the morale within the group was also affected and as more misfortune occurred tempers frayed.

It wasn’t until an allied Dogsoldier, a hound of Saxony descent, saw the snuff box that the true identity of this renowned artefact was noted. Even so, the stronger willed Orcs were not willing to believe such a fairy tale and in true soldier humour the worried Dogsoldiers and cowering Elves that had reportedly encountered the box were all dismissed as weak and ridiculed. But the mishaps continued and the retreat was continually held up or blocked with unexplained and time consuming delays.

Rumour and idle talk soon made its way to the regimental commanders and Kenny was summoned.

He was ordered to get rid of the snuffbox and get rid of it he did, for a time at least.

On the first occasion, he left the snuff box at a roadside shrine, only for it to miraculously reappear at the next shrine with a hand-written note stating ‘Keep Off - Property of Kenny!’

Next he buried it beneath an old olive tree but, that night, as Kenny settled down to sleep, he rested his head on a hard stone only to find the snuffbox lying just beneath. As you can imagine the snuffbox was now giving Kenny some very sleepless nights and the morale of the regiment was deteriorating even more.

Kenny’s third attempt at loosing the box was more extreme as he placed it in the camp fire. The next day nothing remained and all thought that it had finally been destroyed. Alas no. The following evening as the Orcs settled down to a cheerful bowl of gruel. Kenny found the snuffbox in his soup and actually broke a fang while trying to eat a chewy piece of Elf.

Freddy was called and, as he could see no way forward, Dickie - that’s Tricky-Dickie to his friends - came up with a plan.

“We’ll sell it!” He proclaimed, knowing from the Dogsoldier’s remembered ramblings that it must be sold-on for a value well below the measly one centimos that Kenny had bought it for. So what has less value than a coin that has next to no value?

As they passed through the next Dark Elf village they met an ill tempered Guerrilla who had reluctantly allowed the Orcs to pass through after they had paid a forfeit of gold coin and arms. This same guerrilla had the misfortune of playing cards with Foul Mouth Freddy and lost (obviously). However, during the game Freddy had paid for his initial stake with a sloppily written I-O-U. Dickie suggested that the snuffbox be exchanged for the outstanding I-O-U and the guerrilla leader promptly agreed, the curse was lifted and from that day on the fortunes of the retreating army changed for the better and as history will show the Retreat to Korunna led to a counter attack and  The Grande Army of Albion never looked back eventually kicking the invading ‘pointy-ears’ out of Algarvey and back to their own lands, those of the oppressive Ferach.

But how? How did Freddy’s I-O-U lift the curse, surely a favour from Foul Mouth Freddy is worth something. Well as everyone who has ever actually played cards with Freddy will know his I-O-U’s are worth a hell of a lot less than a single centimos!

The fate of the Dark Elf Guerrilla is not recorded.

This article was written exclusively for Orcs in the Webbe and was first published on All Hallow's Eve, the 31st October, 2017.