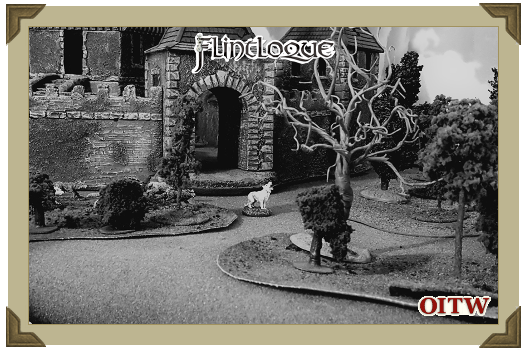 The fearless Giglamps, “Giggers” to his many friends and admirers, faces up against a terrible duo in this Flintloque scenario for two players.

The old Orc spent some time fiddling with his pipe as we sat by a roaring fire in The Notables Club. To the unacquainted he looked like someone’s affable Uncle, a quite pensioner, well to do to be sure, but also well past the prime of his life. Yet appearances can be misleading for this was Giglamps, “Giggers” to his many friends and admirers, and ruin and death to many of His Majesty’s foes. Exploring officer in Catalucia, survivor of the debacle at the Fords of Isandlawana, Hero of the Sudden, and Master of the Great Game. His career had taken him from Cornet in the Sewon and Soforths, to Colonel of the Halflingland Rifles, as well as, to many and varied “other duties as assigned”, other duties that consigned him to the shadowy world of cloak, and dagger.

Satisfied with the state of his pipe Giggers lit a long match from the fire and puffed until the pipe weed in the bowl glowed a bright orange. This was the moment I had been waiting for. A quiet pipe by the fire almost always led to a ripping yarn…

“Have I ever told you the strange tale of General Psyllium Husk and his wayward “niece”? No? Well attend…”

“As a young sprog it was my great pleasure to dote on Miss Lucy Husk, the General’s daughter. At that time, we were quartered in the southern reaches of the Ostarian Empire as part of His Majesty’s Military Mission to the Empire. The climate was fine and the inhabitants friendly... for the most part.

It was often my pleasure to take tea with Miss Lucy. Often with the General as well, although that Gentleorc was just as likely to be touring the local Bergs with one his many “nieces”. He was a widower you see and given to a certain, well, a certain flamboyance more common in Valon’s Fourth Age than nowadays.

This occasion was one such. When I greeted young Miss Lucy, I could read the worry on her lovely countenance. The increased redness of her eyes, coupled with the redness of her protruding lip where her tusk had worried at it were unmistakable signs of her distress, and to my young Orcish heart, a clear sign I must do something to restore her traditional gayety.

Interspersed with a cacophony of tears, coughs, grunts, and wails, Miss Lucy told me that her Father’s carriage had returned home, absent any passengers at all! Worse there were traces of blood on the Coachorc’s seat and more blood on the traces!

Naturally I sprang into action immediately! Where had he gone?

“To seek out a ruined castle that an old gypsy bitch had spoken of. None of the servants had any knowledge of the place and Father’s curiosity was peaked.  You are, doubtless, aware of Father’s interest in Third Age Castle Stable Architecture.”

Indeed, General Husk was a renowned authority on the subject! The prospect of finding an as yet undiscovered Stable must have fired the General’s ardor!

At this I boldly seized Miss Lucy’s hands. Even now, all these years later, I can still recall the toughness of her skin, the sharpness of her claw, Oh Fleeting Beauty of Youth!

I there and then pledged that I would return her Dear Father to the bosom of his kin, or die in the attempt. Tenderly brushing Her hand with my Tusks, to took my leave and set out for the local Ostarian command, demanding a squad of their best troops to aid in my quest.

11x Chosen Dogs detached from Die Letzte Tal Landwehr: Average Regular Dogmen, one is a Segeant armed with a pike, the other 10 are armed with Standard Muskets and Bayonets

The “Niece”: Raw Regular Halfling Vampyre, armed with a whip (+1 in Melee) and one Vampyre spell. Dotti has a unique ability in the Obidiah’s Army supplement and you may use this ability if you wish. Still, in as much as she is a newly fledged Vampyre, perhaps her Arts of Seduction are a bit... off? Judging by the source material I should say not!

11x Wolves: Just normal Fllintloque wolves. Be advised they can be tricky to use... and to fight against. You have been warned.

As many of you will know by now, I prefer to keep my games simple and so make little use of points and traits, flaws, etc.   Please do feel free to add those elements to your games. However, this scenario presents a special problem in that my take on a Halfling Vampyre did not have any points value associated with them. For a more “involved” game, for lack of a better term, use regular Vampyre stats for both creatures and increase the number of Landwehr a bit (well, if you are doing that you can just make it a straight up points-match I should imagine).

With that in mind if you keep main characters more or less intact, and use a roughly equal points value of cannon fodd…ur…rank and file, you cannot go far wrong. Gargoyles are one of the more interesting candidates for minions. Wraiths and/or Zombie Todoroni would serve equally well. Bear in mind though that a fire arm heavy minion force will be able to make much greater use of the decrepit Castle Toadula than will the wolves suggested here, making the task of the Rescuers that much more difficult.

Also, when playtesting this scenario I rolled a three for both Toadula and the “Niece” on the Vampyre spell table in Death in the Snow. How apropos!

This game is best played on a surface some 4 foot by 2 foot minimum with the opposing forces deployed on the short board edges. For convenience we shall call the “top” edge, Toadula’s edge, of this map North. The decayed Castle Toadula is a two foot, roughly square affair with its northernmost bits touching the North table edge. From East to West the castle is centered, meaning, if the aforementioned 4 foot by 2 foot table is used, that the northern half of the table will consist of the castle itself. 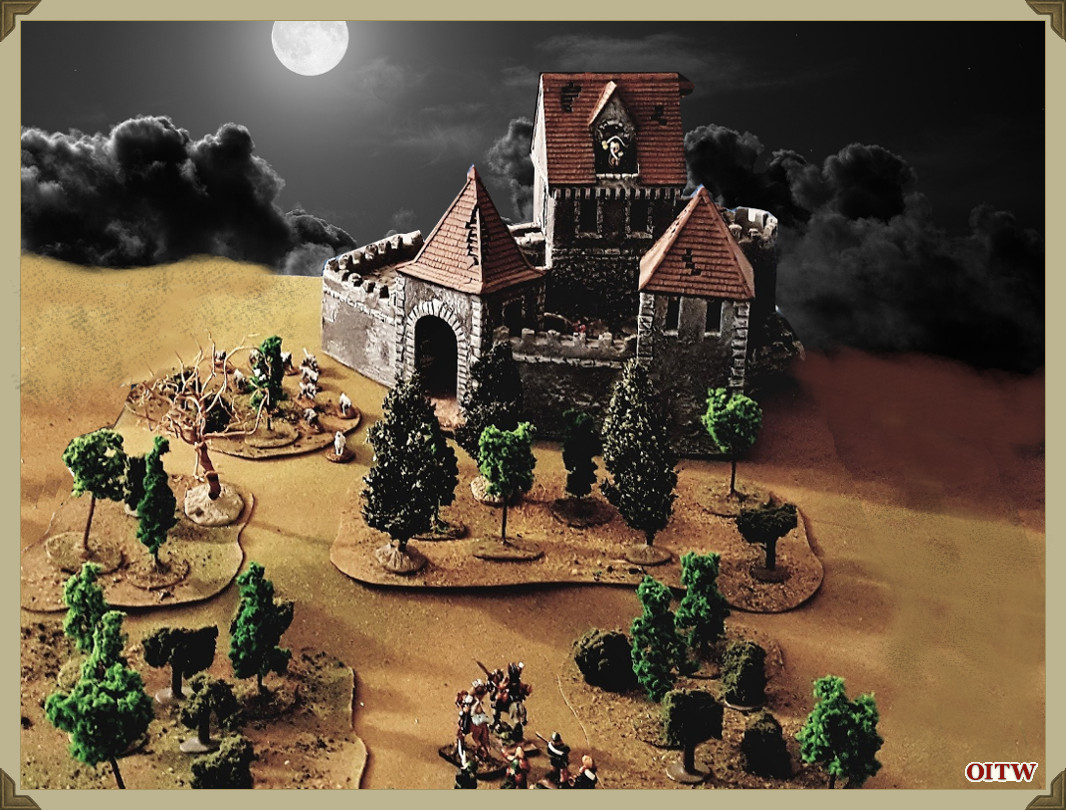 Miniatures, Terrain and Photography by Bob Minadeo - Digital Buggering About by Craig Andrews

There are the usual towers, battlements, and gatehouse one might expect to find in castle. Note, however, dear reader, that Count Toadula is not really all that concerned with keeping wanderers out of his clutches and the gate itself has long since succumb to the ravages of time…and peasant wielded pitchforks and torches. Indeed, there are no doors left intact at all in the entire complex. If possible be sure to include plenty of stairways giving access to the battlements and towers as many of the Count’s minions lack the proper appendages for ladder climbing.

If your collection lacks suitable scenery for such, a simple outline on sheets of paper, or even just a series of low walls, said to be of great height, and therefore impassable to earth bound travelers will suffice.

The rest of the table is overgrown with light woods that halve movement and obstruct LOS after a cumulative 5cm.

Winding its way through the wood, from castle gate to the southern table edge is road. One says “road” but really it is just clear terrain, about 2 to 3 figure bases wide, that provides much easier going than traipsing through the wood, but hardly a direct route. The road also provides good lines of sight, but only until the next bend is reached. Through the wood or along the torturous road? You pays your money and you takes your chances.

The Rescuers deploy anywhere within one move (this varies by figures type and terrain traversed of course) of the center of the road where it meets the Southern table edge.

The Cursed deploy within the Graf Kröte Burgsaal’s ground floor. If you have ever seen a pack of wolves, or dogs for that matter having a kip, you will already know that while sleeping they can really pile into compact and cozy places.

General Husk is being held captive, somewhat worse for wear, but we do not hold this against that august Gentleorc in game terms, in the cellar of the Graf Kröte Burgsaal.

Stashed away in the celler is Poor Old Husk. He’s been nibbled on a bit but is mostly being saved for late night snacking.

General Psyllium Husk: Experienced Regular Orc, armed with a shovel or some sort of pointed stick if successfully freed by the Rescuers. He is free to pick up any weapons that might be left abandoned by their former owners if any should come to hand.

General Husk may not be harmed by the Cursed in anyway until he has been released by the Rescuers. Once the Good Gentleorc has been freed he is... fair game... if you may pardon the pun.

Releasing the General couldn't be easier. It simply requires one of the Rescuers to enter the cellar and start its first action adjacent to him. Releasing the General takes up a full action although the rescuer may then take a second action if normally entitled to one.

Once released the General comes under the control of the Rescuer player and is treated as part of his section.

The game continues until only one side has forces left on the table.

The Rescuers win if they can safely get General Husk out of the cellar and back to his ever so distraught daughter (off the south table edge).

Failing that the Rescuers may consider it a victory of sorts to have rid the world of Count Toadula, at least until the next sequel is produced.

Killing, or re-killing more appropriately the Vampyre formerly known as the “Niece”, while suffering Toadula to live, and General Husk to die or remain captive, will at least somewhat restore the balance of things…served the randy old So-and-So right they’ll be saying in Londonium’s salons once Goode Queen Victoriorc comes to the throne in the following era. History may not be kind but it will at least be understanding. Mind you the local peasantry won’t be too pleased. Sequel?

Failing to rescue General Husk, while suffering Toadula and the “Niece” to live would be a right cock up. Best not to return at all then...

Just in case you were paying attention to the fiction at the start of all this, Dear General Husk was bound for disappointment. The Toadula line had no need for stables, their 'cattle' have no need of such things.

This article was written exclusively for Orcs in the Webbe and was first published on the 12th December 2016 as part of it's 2016 Advent Calendar.