With The Devil at Your Heels

"With the Devil At Your Heels"

A Flintloque Scenario by Christian Cuello 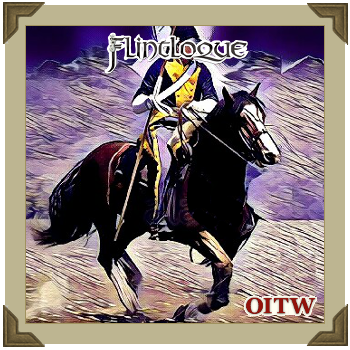 Race through the countryside with pursuers hot on your heels in this steeplechase style scenario for two players.

In this scenario, one player will be racing through the countryside with their pursuers hot on their heels. Perhaps you are delivering emergency dispatches from High Command, or perhaps carrying with you a precious cargo of Cryptmas cards to inspire the troops at the front lines. This could just as easily be an escort mission, provided time is of the essence.

As such, game duration is up to you. This is determined by the number of phases or additional goals. For instance, pursuers could attempt to capture their quarry, or remain within the same game board at the scenario’s conclusion. Alternatively, play could conclude when the escapee is at least two board lengths away.

This may seem fairly simple, but there are a few nasty surprises in store, which are explained below.

Setting up for Play

This scenario make use of the “steeple chase” mechanic, whereby play utilises several sections of a game board to simulate fast movement. Such that an initial section of three or four segments would be laid out, with a previous (or reserve) board being placed at the front as the figures move on, like so:

Ideally the board section would contain a road or pathway, potentially forking out at some point as this will add more tactical elements to play.

Terrain should be dispersed as normal, but preparation of some obstacles (fallen down trees, blockades etc.) also feature in this scenario so be sure to have something prepared!

Aside from the regular gaming paraphernalia, players will also require some playing cards – a regular deck will do.

To differentiate between the two, the road or pathway sections allow full movement, where any wilder terrain will only allow to move at half movement.

This scenario only uses a small amount of figures. It is recommended that the Defender in this scenario use one miniature to represent an ADC, messenger, or perhaps even a noble or precious cargo in a carriage. The characters need not be mounted, per se.

The pursuant – the Offender – will require two figures, ideally mounted.
This could be flipped to have two Defender escaping one Offender for a different take on this scenario.

You will also need some spare figures as in some cases player may be waylaid by looters and other vagabonds – you have been warned!

Both sides draw three cards at the commencement of play. These are pieces of equipment and other twists of fate which the players can deploy at the start or end of the turn: either their own or their opponents as determined by the chosen card.

Firstly, players must choose a suit. Take all the cards from that suit and shuffle them. Only the cards 10, J, Q, K and A will have an effect. The rest are duds, but remain in your hand. This may mean that you end up with three cracking cards, none or a mix of both.

10 Attacker: A low-hanging branch pops up suddenly! Duck!
10 Defender: You manage to find your bag of caltrops.
J: Waylaid! A small group of opportunistic ruffians emerges from the forests to take advantage of the chaos.
Q: A tree has fallen across the pathway. Risk jumping over or go around!
K: Second Wind/Puffed Out: The targeted unit either gets to move an extra half-distance, or slows down one half. You decide!
A: Crack shot! You manage to let off a shot with your trusty sidearm.

Keep your hand hidden, and your opponent guessing!

This article was written exclusively for Orcs in the Webbe and was first published on the 2nd December 2016 as part of it's 2016 Advent Calendar.