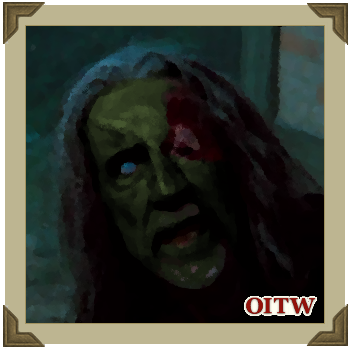 Our heroes search an abandoned system of caves and find much more than they the treasure they're looking for...

Old Bolg's gibberings should eventually lead the parties to an abandoned mine in a remote part of Nuevo Catalucia. Bolg will lead them to the entrance, then runs off (no matter how well you thought that you had leashed him!). He will certainly not enter the mine. As he runs off, the party led by him will hear him singing out “Eggs and marrow bones!” - what a nutter!

The old mine entrance leads into a shaft which continues downwards for some time until coming to a sharp right-hand turn (see the map below). The party are now in the section used by Captain Shambog to hide the gold! He was aided by Kurt Döppi, a dwarf in his crew, and a small army of captives providing slave labour.

The three ship crews are as in Act II.

This was where three members of Shambog's crew kept watch while the mine extensions were being dug. Of course, Shambog had them killed and left in this room when he departed – but the weird nature of the rock here, which fizzes with Wylde Magick, resurrected these dead pirates like the Undead of the Witchlands! Thus there are 3 Experienced Zombies (with swords and pistols) in this room – they will attack anyone entering! Nothing much else of value remains.

Captain Shambog spent a little too much time down here in the strange mine, and when he died at sea he became a strange undead creature driven by lust for the gold which he buried here. He eventually returned (walking along the sea floor for some time) and went back to his quarters here. He is effectively an Average Vampyre, with sword and brace of pistols. He will usually be found sat at his desk in this room, writing love sonnets to his gold – and, yes, he is quite mad! There are some quite nice fittings and trinkets in the room, if anyone fancies looting it.

Here the slave gang were kept when not working – and then they were killed and left here when Shambog left. Like the guards and the Captain himself, the weird rock has reanimated them – there are 13 Raw Zombies (of various races) in here, all armed with large improvised weapons. They will attack any living beings entering – and there is no loot here either!

While extending the mine, Shambog and Döppi broke into this natural chamber. Deciding on a modification to the original plan, they placed a special egg in the chamber (hence Bolg's comment) which hatched into a Monster to guard the hoard. (Depending on model availability and personal choice, I would go for a Manticore or something similar from Matthew Hartley's Wilde Things article). This creature has tried eating the Undead, but found them to be poor eating and will leap at the chance to eat fresh meat. It does sometimes venture outside, but the area has little to offer. The cavern is effectively a lair, with strewn bones, etc. Not much of any real value, though.

Here, beyond the rusted portcullis, lies the famed treasure. The room itself is full of traps (Tony Lee's scenario The League of Extra-Curricular Not-So-Gentlebeings has a good traps system!) for the unwary, and is the masterpiece of Kurt Döppi – who is still here! Shambog (predictably) killed him before leaving the mine, and Döppi was resurrected by the magic here. As he was obsessed with the treasure himself, he has become a Wraith (Average) and will attempt to defend the treasure from all comers.

Speaking of the treasure, there is only an old sea chest in the room, with Dwarf runes inscribed into it. Opening this shows it to be full of gold and jewels – but hardly the hoard expected. However, it will prove impossible to lift, and (up to a point) almost impossible to empty. The chest is a magic holding space, and the entire stash was poured into it. Basically it will take a lot of effort to get the treasure out of here!

Notes on Gaming in Tunnels

Given the underground nature of this scenario, some comments on depicting the network of Shambog's Mine:

1. Try using a set of tunnel cards, such as those in Dungeoneer (a free downloadable game that can be found here)

2. Take a big piece of paper and draw out the tunnels as they are explored (cheap, but not an aesthetically wonderful system!).

3. If you have, or can beg or borrow, some of the lovely 3D dungeons out there, then these make a great looking game. (There are various manufacturers out there – Dwarven Forge, Ainsty or Hirst Arts to name three).

Depending on how your gamers are doing, it may be worth having some “wandering monsters” (probably zombies, but possibly other things) to liven things up.

Hope that you enjoyed the search for the Dead Dwarf's Chest!

The above article was written exclusively for Orcs in the Webbe and was first published on the 22nd December 2008 as part of it's 2008 Advent Calendar.