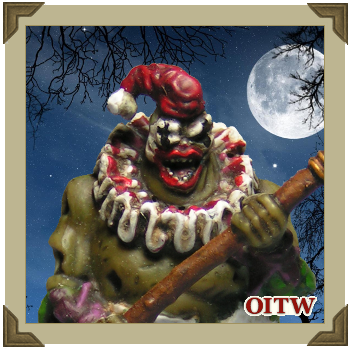 On this All Hallow's Eve Tony Harwood once again takes up the reins to spin a tale of terror from Valon.
This year we learn of the Ferach Elf Rinald and the terrible fate that awaits him in the frozen Witchlands.

As the Grande Armee du Nord marched east, the Ferach Elves were in good humour and looking forward to a short campaign against the Dark Tsar and his Minions, some even talked of being home for this year’s harvest. No one was expecting a long campaign. Regiment after regiment marched to the regular beat of the numerous marching bands and beneath the many banners, flags and golden eagles. The bands would vary the music and at times played music hall tunes to the great amusement of the troops and the consternation of the Officers.

At the front of one such band marched Rinard, a young band leader who skipped along as he twirled and tossed his baton high in to the air, catching it with a flurry that caused even more uproar in the ranks. Rinald’s skill with the baton was legendary and even the stiff-lipped Officers saw skill in the way that he handled it.

Days had passed no sign of anyone, no sign of any life at all. The landscape for as far as the eye could see was barren, worse than barren, it was totally devoid of all life, no birds sang, no crops grew and no sign of any structures save the charred remains of odd hamlets of farms.

The up-beat mood was crumbling, troops were marching more slowly, and officers were troubled.

Still the Grande Armee moved eastward, every step a step away from their beloved homes and deeper into this dead, barred and lifeless wasteland. The feeling of foreboding grew and it was obvious that something had to be done.

One evening Rinald was called to his commanding officers tent and after a brief pause he was ushered in and asked to sit in front of a small folding table. The Officer, coughed un-easily, for what he was to talk of was a secret between him and Rinald, one that he had sworn to keep.

For Rinald had joined up with Mordred’s Army days after his 16th birthday – he had run away from the circus. And not just any circus this was Rinald’s fathers circus. One of the greatest circuses in the whole of Urop. Rinald had been born into the circus and was one of the heirs to the great Circus Sol – Rinald and his family were one of the greatest clown families in the world, having entertained Kings and Queens all across the known world (that is until the Emperor has removed these heads of state and their heads when he came to power).

“Rinald, I need your help, the moral within the ranks is low (and getting lower), I need to raise their spirits and I believe that you can help.”

Rinald gulped as he saw what was coming.

“I want you to entertain the troops” continued the Officer, “perform some tricks and amuse them, we cannot have the moral of the troops lowered any more, you understand what I am asking?”

Without a word Rinald stood, saluted and with heavy tread made his way back to his bivouac. That night Rinald removed three carefully wrapped items from his pack and laid them out in front of him. The next morning he pulled each of them on and marched to the front of the regimental band, to howls of derision and much cat calling.

Rinald was wearing his clowns’ hat and two upturned and bell-bedecked shoes all three made from bright and Gaudy material, but it was the clown nose and white face make-up that was causing the most comments.

The band started and Rinald as any true entertainer would, started to ‘comic march’ in front of this and the remaining regiments, music played and songs were sung and it wasn’t long before spirits were raised and smiles were once again seen on the faces of the tired Ferach troops.

The Ferach marching band led by a band major dressed in a clown’s hat and with a painted face became a talisman – a talisman that lifted the whole demeanour of the troops and made them march with renewed vigour and hope. The Officer was pleased that such a simple turn-around had been achieved from such a simple action.

The happy events were not to last as any pupil of the Mordred Wars and particularly those against the Dark Wraith will know. After Vilnau things changed. Evil Undead shambled out to meet the marching Ferach and worse still ex-Ferach were later turned against their own brothers in a half-life existence that still brings back troubled nightmares to those that witnessed them.

But Rinald continued to march with a clown’s hat and painted face. It helped to sooth the troubled minds of the Ferach. In fact his talismanic powers were instrumental in many engagements and The Emperor himself was well pleased.

Many months passed, the promised victories were not forthcoming and at last, as Winter was coming the Ferach High Command made the decision to retreat, to leave behind them the domed capital of Moskova, to leave behind the brightly coloured halls and retreat via Vilnau.

This time Rinald marched at the rear, making sure that no stragglers fell to the vile Undead or evil Cossacks. It was while hurrying up some stragglers that Rinald was first wounded and later killed.

One less soldier, one less clown. The retreating army continued to shuffle homeward. By now the once great army was but a shadow of its former self. Estimates amongst the cold and starving soldiers were that a third of the troops had been lost. The truth known to only a few was much worse...

On All-Hallows Eve, as the weather got worst and starvation was gnawing at the stomachs of all the remaining Elves, - when hope was at its absolute lowest. There came a miracle.

Through the cold mist was seen Rinald, Clown’s hat and jingling shoes, baton tossed and caught in one hand and even the sound of a muffled marching band. The Elves cheered to see that one of their own had cheated death and was now returning to them, spirits rose and hunger (at least for a short time) was forgotten.

Rinald was not alone. There were hundreds – no thousands marching behind him, that slow cumbersome gait that singles them out as Zombies. Rinald – an Undead Rinald was leading a huge force of the Dark Tsar’s Unelven troops and worst still was dressed as a Zombie Clown!

Few survived that encounter and those that did will never forget the horror of a Ferach Clown, an Undead Ferach Clown, leading the shambling remains of a marching band and at the head of an Undead host, the like of which had never before been seen. Many Ferach laid down their guns and ran through the slushy snow away from this horror show, but as you know – you may run but you can never out-strip creatures who require no sleep, no food and no rest. At the Battle of Vilnau – one of the most costly for the Ferach, hundreds died at the hands of the advancing Undead, even more from hunger, exhaustion or drowning in the freezing cold rivers that blocked their path.

Today, Clowns are forbidden in the Ferach Armee, no funny hats, no white painted faces are allowed, as the memory of Rinald at the head of a Marching Band, funny hat, jingling boots and baton twirling still haunt many regiments...

There is even talk that any new recruit with the name Rinald is turned away and don’t try to join the Ferach Armee if you, like Rinald are running away from the Circus.

It has become somewhat of a tradition, that on All Hallows Eve a short story is included on these Orcs in the Webbe pages. This year, I thought it was about time I painted up this resin/plastic and Undead Clown. It was while painting him that the story developed. I hope that you have enjoyed it. 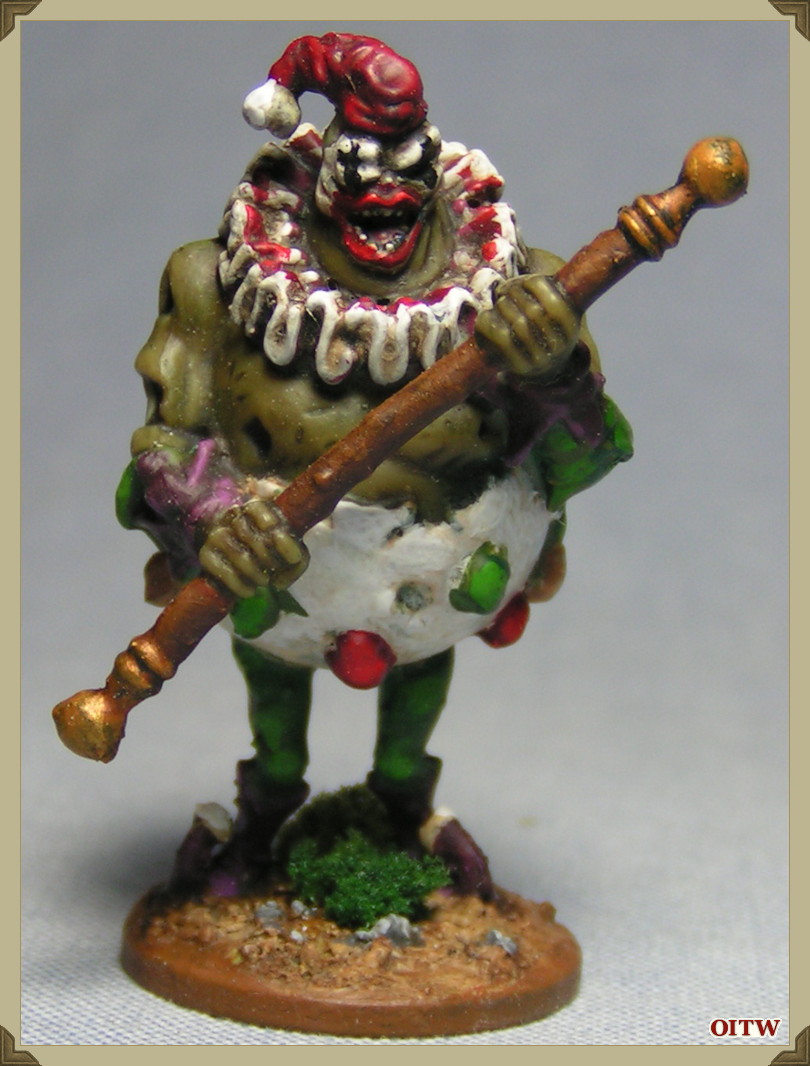 This article was written exclusively for Orcs in the Webbe and was first published on All Hallow's Eve, the 31st October, 2015.