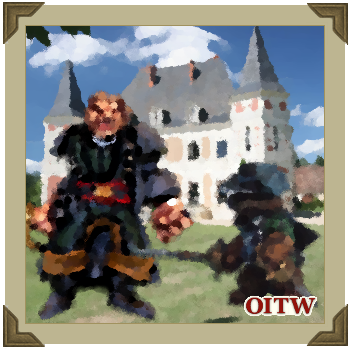 Thrown once more through the barriers between worlds Captain Rekhardt Sharke finds himself allying with the Dwarven Musketeers of Iron Mask Miniature's Grands Chapeaux to hunt down the nefarious Milady de l'Elfe.

A sharp pain woke him. He opened his eyes to see a razor thin blade pointed between his eyes, atop him stood a Dwarf in a floppy hat sporting the biggest feather Sharke had ever seen. What the?!!

“On what?”, mumbled Sharke. “Gerroff!” Sharke pushed the Dwarf aside and pushed himself to his knees. He looked around at the small wooden walled room he had awoken in. It looked like one from a coaching inn, a small bed to one side, a mirror on the wall, a chamber pot... and three Dwarves in floppy hats pointing sharp blades at him.

“Ooh eez you?” demanded the first.

“Et what az youz dern with Mi’lady?” questioned the second.

Out of the Frying Pan Into The Fire

Sharke’s Mi’lady is a sequel to last year’s Sharke’s Barsoom, following on from previous adventures in Sharke’s Aquila and Sharke’s Panzerfäuste. Sharke and his lads have found themselves transported by foul magicke to a series of different worlds, firstly The Land of Panzerfäuste then Bochemannica, followed by Barsoom and now that of Grands Chapeaux.

Sharke has been transported to a small coaching inn in a world rather like Valon, but clearly different. Whilst black powder weapons exist in Grands Chapeaux, the sword is the weapon of preference.

The three Dwarves holding him at swordpoint are members of the King’s Musketeers, an elite force acting under the personal orders of the Dwarf King. Tasked with capturing the infamous Mi’lady de l’Elfe; Arfur, Arrowmiss and Porti had their quarry in their grasp until she cast a spell and she disappeared in a cloud of sepia mist, replaced by none other than the Orc Rifle Sharke…

An Adventure in Grands Chapeaux

Grands Chapeaux is a fantasy skirmish game from Iron Mask Miniatures, supporting their line of fantasy miniatures, inspired by the classic story The Three Musketeers. The only difference is the King’s Musketeers are Dwarves and the Cardinal’s Ogres.

Whilst you could use Flintloque for this adventure, I would recommend Grands Chapeaux as they have a more distinctive flavour for the setting.

As with Sharke’s Hogsnachtwatch from a few years back, this adventure is a series of small games driven by a deck of cards.

For the purposes of this adventure Sharke is a Veteran starting armed with just a sword, Arfur, Arrowmiss and Porti are all Sword Masters, again just armed with swords.

The adventure can be played by up to as many players as there are character figures (we start with four - Sharke, Arfur, Arrowmiss and Porti). You also need a GM to act in the same manner as in an RPG, controlling encounters arising from revealed cards.

The Deck of Cards

Take a deck of cards, removing the picture cards and joker. Shuffle them and lay face down in an 8 x 5 grid. Each card represents a small 2’ x 2’ wargames table. The GM should allocate terrain as they see fit dependent on what each revealed card represents.

The adventure only lasts 25 turns before Mi’lady de l’Elfe escapes for good, so the characters will need to make some compromises.

The miniatures and rules for Grands Chapeaux are available from Iron Mask Miniatures website here.

The copper-tang of spilt blood hung in the air around the shady dell. The bodies of two ogres lay on the ground and Porti was wiping the blood off his blade with the tabard of one. Arrowmiss was kneeling over the bodies praying for their souls.

Arfur stood with his foil touching the milky white throat of the half-blood Mi’lady de l’Elfe, “Zis time there is no escape for youz Mi’lady…”

“Maybe mon cher” Mi’lady responded, tilting her head back slightly and fixing her gaze on Sharke. “But zere will be noz reward for yourz barbourous allies ‘ere”.

Swiftly taking one step back, she pulled a small vial from the sleeve of her dress, dashing it at the Orc’s feet.

A flash of sepia, that increasingly familiar taste of ozone and Sharke once again found himself falling through time and space…

He woke on a metal floor, in a dark corridor. Pushing himself up he noticed that in front of him stood some kind of mechanical contraption. A glowing blue eye on a stalk protruding from a form of helmet. The eye fixed its attention on Sharke and then the contraption spoke one word:

Sharke's world hopping adventures will continue here on Orcs in the Webbe in 2015 in "Sharke's Doctor"...

An Orcs in the Webbe Original! "Sharke's Milasy" was written exclusively for OITW's 2014 Advent Calendar and was first published on Tuesday 23rd December 2014.