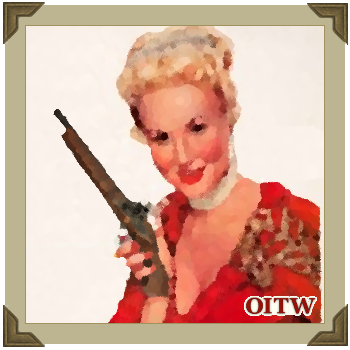 Bette has become the scourge of Mordred's secret police, liberating loyalists from the very jaws of death.

With many of her kin cruelly slain or held fast in the notorious Le Bst'ard prison, Bette has become the scourge of Mordred's secret police. Liberating loyalists from the very jaws of death and spiriting them through a web of aids and helpers, she has led many to freedom in Albion. Her network - The Starlight Underground – saved many beings of influence during the early months of the civil war.

A new legend was born - Bette has run Mordred's lackeys a merry chase, leaving her pursuers to nurse their swollen feet and curse their affliction - the Crimson Bunionette.

Here is but one episode where The Crimson Bunionette and her loyal companions overcame the machinations of Mordred.

Bette and the Comte

Bette's section are guerrillas, her 3 assistants are all experienced Ferach Elves, and armed with a pistol and knife each. In addition the wagon driver has a blunderbuss. Bette herself is experienced, and armed with two pistols and a knife.

The Comte and his entourage are part of Bette's section, they are:

The Militia Road Block and Dragoons

The Elves of the roadblock are all of Militia status. They are all Ferach Elves, led by an Average sergeant, with 4 Raw soldiers. All are armed with muskets and bayonets.

All the road block guards begin the game with their muskets unloaded (as they aren’t expecting trouble and its dangerous to walk around with a loaded gun). They do, however, have bayonets fixed.

A unit of Dragoons will arrive on the road at the Eastern table edge, 1d6+2 turns after the first shot is fired.

The Dragoons are mounted Ferach Elves. They too are Militia, led by an Average Ensign, there are 7 troopers (2 Average, 5 Raw), all are armed with a sword and standard carbine.

To win, Bette, the Comte, and two of the Comtes' followers must escape off the West side of the table.

Hidden - The game begins with the Comte and followers covered in the wagon, Bette and one assistant driving the wagon, and two other assistants following behind on horses. All are currently stopped at the road block and surrounded by the road block guards. Bette and her followers can begin with pistols and knives drawn (surreptitiously kept under cloaks etc).

The Wagon and Horses - The wagon moves at the speed of heavy cavalry, however if one of the four horses are shot, the wagon cannot move until the horse is cut free (which takes one turn), and the speed will be reduced by 25%. Moving off-road will reduce movement by 50%. Its two horses may be cut free (which takes 1 action) and ridden.

This scenario was originally published on Mike Baumann's excellent Flintloque website Filbanto Stew. It, along with the other scenarios in the campaign, have been around on various prior regenerations of Orcs in the Webbe over the last ten years and re-appeared as part of the ongoing Flintloque Archive Project on the 13th of June 2014.