Set in Valon, the World of Alternative Armies' Flintloque. 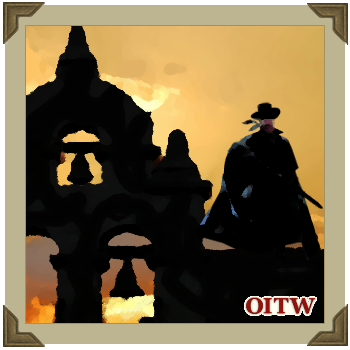 Don Diego Della Toyota's friend, the nobleman Don Armand, has been speaking out against the taxes levied by the cruel Alcalde Jamón and has been forced to hide out in an old mission to avoid arrest. Luckily for him Don Diego is the man behind the mask of El Lupe, the people's hero and he is on his way to help his friend.

This scenario was written for use with Two Hour Wargames' excellent Reaction System rulesets. It was written so it could be played solitaire with the free to download Chain Reaction: Swordplay ruleset but can easily be played using any of their game systems thanks to the modular nature of the games with their central Reaction System mechanic.

It is set on the world of Valon, the world of Alternative Armies' 28mm skirmish wargame Flintloque. Valon is a world inhabited by fantasy creatures such as Elves, Orcs, Dwarves and Ogres - all immersed in a bitter war. The ancient order of the Darke Age has been ripped down and crushed beneath the iron heel of the Elven tyrant Mordred. Once a world bathed in the aura of Wylde Magicke, Mordred has manipulated the very fabric of Valon's reality creating a new era of science and blackpowder.

If you prefer gaming the real world as opposed to Valon it will soon become clear (if it hasn't already) that El Lupe is based on Zorro and you can play it using the normal rules for humans found in any of Two Hour Wargames' rulesets.

Queso took a deep breath, "But, um, s-s-s-ir. He is a well liked and trusted nobleman of Los Diablos. I'm n-n-n-not sure we can just arrest..." His voice petered out as he saw Jamon's glare.

"I w-w-will go and get him and escort him to jail. Sir. As you command."

Outside the Alcalde's office, just below the window, the manservant of Don Diego della Toyota - sole confidant of the people's hero El Lupe - wrote a quick note and gave it to a child to take to Dan Armand's hacienda. He climbed onto his horse and rode as fast as he could back home to tell El Lupe of Armand's plight.

Less than an hour later Don Armand saw the dust of the approaching soldiers. Thanks to the mysterious note signed only with an L he had had time to prepare. Collecting his things he kissed his wife and child and headed off to the mission. Brother Santo would hide him amongst the monks he was sure. He would not be arrested today.

El Lupe must prevent Alcalde Jamón's soldiers, led by the bumbling Sergeant Queso, from entering the Los Diablos mission and arresting his friend Don Armand who is on the run after speaking out against Jamón's unlawful taxes.

The down-trodden peasants of El Dorado cried out for a hero to release them from their oppressors and their calls were answered. Known only as El Lupe (pronounced loo-pay), this dashing, masked avenger rode forth to right the wrongs of the cruel Alcalde of Los Diablos. Trained by the finest swords-elves in Catalucia. His secret identity, known only to his deaf-mute manservant Manuel, is actually that of a local gentle-elf: Don Diego della Toyota. Don Diego presents the facade of a scholarly Elf with no interest whatsoever in local politics. Jamón, the Alcalde, has been completely fooled by this pretence and is at a loss to explain who is perpetrating these cunning raids.

In this scenario you play the heroic team of El Lupe and his horse Cycloné (although with a little bit of tinkering, there is nothing stopping you playing the soldiers).

In Chain Reaction: Swordplay El Lupe is a Rep 7 Dark Elf (yes, he's that good. He's the hero!). He counts as a Light Troop so when firing he may roll an extra D6 and discard the lowest result. As a Dark Elf he has a Move of 7", a Tough score of -1 and a Melee score of 0.

These stats and the rules for playing games set in Flintloque's world of Valon are all taken from Bob Minadeo's rules supplement, Flintloques & Muskets, which are reproduced her for ease of play. Tough is a modifier subtracted from a weapon’s impact when shots hit El Lupe when testing on the Ranged Combat Damage Table. As he has a negative number this actually serves to increase the weapon’s impact by 1, Dark Elves aren't that hardy. Likewise Melee is the number of dice the figure adds to its Rep when conducting hand to hand combat. Normally Dark Elves have -1 Melee, meaning they would reduce the number of dice they roll by 1, but El Lupe is an Expert Swordsman and does not suffer the penalty.

El Lupe's whip is treated as Throwing Axe (From CR: Swordplay, p.17 - Range 6, Targets 1, Impact 3) but can also be used to disarm an enemy. This must be stated before the Ranged Combat roll is made. If the attack is successful do not roll on the Ranged Damage Table, the targeted weapon flies off D10cm in a random direction.

Cycloné, Lupe's legendary steed, is a Light Horse with a move of 13" and a Tough of 1. Normally a Light Horse would bestow a -1 melee modifier on it's rider, Cycloné suffers no such penalty. Lupe's horse is a character in his own right. A powerful, intelligent, dark black creature. He can be moved as an independent Star with Rep 5.

Cycloné can also perform simple tricks, such as coming when called and attacking on command. As an action (Added to the list found in Chain Reaction: Swordplay) El Lupe can issue an order to Cycloné is he is within 12". You can assume that he is capable of doing anything you’ve seen a horse do on television or in the movies.

Sergeant Queso is the Non Player Star Leader used in this scenario. He is also a Dark Elf but has a slightly reduced movement of 6” due to his indulgences. He is armed with a Sword (HW) and a Pistol (Range 10", Targets 1, Impact 3).

Generate terrain for sections 1-4 and 6-9 as you normally would using Chain Reaction: Swordplay (p.24) but give things a leaning towards terrain found in a desert (Google "ironwood forests" for some inspiration).

Section 5 contains the Los Diablos mission. Most of the newer Two Hour Wargames' titles share a simple yet elegant solution for buildings using defined areas. Whilst no examples are found in Chain Reaction you can see several of them in this official free file from the Two Hour Wargames Yahoo group. Just Google Spanish missions and adapt one of the floorplans for use with Two Hour Wargames (I used this excellent one here).

El Lupe and Cyclone may start from any table edge.

Alcalde Jamón's soldiers do not start in play and are generated from PEFs as normal.

PEFs are only resolved if there is Line of Sight (LOS) AND they are in the same area (numbers 1-9 as normal outside the mission, defined areas within the mission). Once in LOS in the same area PEFs are resolved using the normal rules (page, 31) except that you place twice as many Rep 3 soldiers than stated.

El Lupe is trying to find Armand before the soldiers do. Armand is hiding amongst the monks of the Mission (with the Monks permission, they are a victim of Jamons taxes as much as anyone in Los Diablos).

When El Lupe (or Cyclone) rolls for PEF resolution, any result of a B or C has a chance of being monks (1-3) or soldiers (4-6). If soldiers just resolve as normal.

As more monks are discovered by El Lupe and the Soldiers there is a greater chance they will encounter Armand. This is handled by using a separate pile of Monk counters. There are 1D6 monks per 2 defined areas (rounding down) in the Mission (i.e. if you create a mission with 7 defined areas you roll 3D6 and add that many monks to the monk pile. Any tokens will do, they do not enter play. One of them should be marked. If the marked token is drawn when discarding monks then Armand has been found.

However in this scenario it is not only El Lupe that can trigger PEFs, there is also a chance that when two PEFs meet (LOS in the same area) it may be that Alcalde Jamón's soldiers have found some monks or even Armand.

When two PEFs meet roll for PEF resolution as normal but reference the table below:

X: The PEFs are not interested or do not notice each other. Nothing happens.
A: Something's Out There! - The PEFs meeting has created some unease. Increase the EAL by 1 as normal.
B: Contact! - Some soldiers have found a group of monks and order them to leave the mission. Remove 1D6 monks from the Monk token pile (see below).
C: Armand! A group of soldiers have found Armand! Resolve one PEF as Armand (Rep 4 - Dark Elf - Noble). Resolve all the other PEFs on the board as groups of soldiers using the normal rules. They now move using the NPC Movement table except for the group escorting Armand which will continually Fast Move off the table as quickly as possible.

When I relaunched OITW back in 2008 I actually wrote out a schedule of things to be published. As well as things I planned on scanning/uploading I also used it to write down basic information of some scenarios I was planning on writing. The snippet below was intended to be an El Lupe adventure for Alternative Armies' then-recently released 5th Age of Valon game, Frontear. It's planned release date was the 24th March 2008.

"El Lupe Goes to The Mission - A group of soldiers are trying to enter the church where an influential ally of El Lupe's is hiding. The character and the monk may block any door from the inside and it takes 3 soldiers to overcome them, or they can barricade the door. El Lupe is there to hinder the soldiers on the outside. Need a rule for leaping onto the roof tops to prevent them blowing El Lupe away. Include rule that El Lupe cannot be killed only incapacitated. After the game ends a writ is received stating the sanctuary of the guest is to be honoured and they cannot remove him from the church (ooo, use the catatonic inquisition they pressure the governor) - Spider plot - have the Catatonic faith dude get into a coach with the black widow at the end (they want guest to be kept here for some reason)"

The somewhat different finished version of the scenario you see above was written for use with Two Hour Wargames’ Chain Reaction rules in my little flat in Bristol on the 24th of January 2014.

After playing 'El Lupe's Secret Passage' a few times I realised that using the rules as is El Lupe and Cycloné more often than not came up against 1 or 2 soldiers which they made short work of so I have now doubled the amount of soldiers they face.

As usual special thanks go to Bob Minadeo who not made gaming in Valon using Two Hour Wargames' Reaction System possible with his excellent supplement, Flintloques & Muskets.

“El Lupe and the Mission” was written exclusively for Orcs in the Webbe on Friday the 24th January 2014 but due to being exceptionally busy having just bought a house it first published a week later on the 31st January.

El Lupe and Cycloné were both created by Mike Baumann and first appeared on his Filbanto Stew website.

To see the full range of El Lupe adventures on Orcs in the Webbe just click on the El Lupe tag below this article.