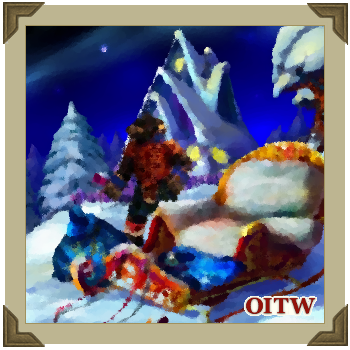 The Master of Willorc's Hall regales us with his musings about the time he met the good old Joccian Saint, Saint Knickerless, by way of a seasonal poem with introduction and footnotes no less.

Well Huzzah all, Cryptmass is almost upon us so it is a time for jollity, jollification, good will and goodies. I was recently visited by that famous, although rather odd, fellow Major Hungry Livinstorc Junior who gets confused sometimes and thinks he’s called Clementine Clorcke Morish and puts a dress on. Well, I blame the great Podo disaster of er...um... a while back. Nasty business. Albion verses the HEVC. The HEVC team are a funny lot. Wearing black and before a pukka ride up and perform a funny “war dance” thing called the Hackup which involves a lot of chanting in foreign, slapping, pointing and sticking your tongue out. They ride jet black Dodos too so are usually known as the “All Very Very Dark Greys”. Anyway it all got out of hand a bit that year and the match was abandoned as nobody had scored before midnight and half of the players were out cold. That’s Podo for you!

This Johnnie is a chum of the Writer Chap who is in and out of the ‘spital like a yo yo at the moment but tells me he’s not too bad at the minute. Poor Miss Muse is doing a lot of gazing from the North gatehouse bower and sighing. She does it very well, along with harp playing and looking like a Pre-Ruffianite painting. Golly, all that red hair and a Chocobite bonnet too! Erhem!

So this chap was working on his poem but just couldn`t get it right so, knowing my talent for such things, asked me to fix it up for him. So, here goes...

Twas the Night Before Cryptmas,
(or Account of a Visit by Saint Knickerless*)

*This is the Joccian, Kilt wearing, Irn Bru drinking Catatonic Saint who is a jolly good sort. Ahem! La lala, mememememe! - Just tuning up the vocals. Where`s my lute?

“Twas the Night before Cryptmas, when never an Orc,
was thinking of stirring, not even Jorcs, (1)
the model limbs hung from the big Scary Tree (2)
cast by AA and painted by me. (3)

Harry was nestled up (4) all snug in his bed,
while visions of Tummy Dancers jiggled in his head (5)
and Blanche in her ‘kerchief and I in a huddle,
were falling asleep having just had a cuddle.
When out from the lake side there arose such a prattle,
I thought it was Cruddites, Hades bent for battle!
Away to the window, all ready to bash,
I opened the curtains and pulled up the sash.

Or was it Bfoonhu, arose from the lake? (6)
Oh what did he want, for Sentinel’s sake?
But what lay below for my wandering eye,
But a crashed tartan Sleigh pulled by big Bull Haggi! (7)

A big Rat was driver and looking quite faint,
It was only Saint Knickerless, the Kilt’s patron Saint! (8)
He cursed and he raved at his much battered sleigh,
“Och, I need a Bru just now!” I heard him say.

“I had too much Bru, then I went for a fly,
I should nay hae done it, that’s done it, Och Aye!
Ma sleigh it is busted, I swear that is true,
Hey buddy, I need a hand, please will ye do?”

Without hesitation I raced from the Hall,
for my Mum’s (10) favourite Saint, I would risk it all,
In my blue bunny slippers to rescue I bound,
Saint Knickerless needed me, so I had found.

He was wearing his kilt, with brogues on his feet,
his jacket and bonnet, he really looked neat!
A barrel of Bru was in the sleigh back.
“Ach how can I thank ye?” “I’ll have some o’ that!” (11)

His eyes darkly twinkled, he poured me a Bru,
it was so delicious, “The Bru gets ye through!”
“I’ll sort it for you, I’ll be done in a tick”.
I gave the left runner a jolly good kick. (12)

The repair of the runner, it soon was all through,
As between every kick I sipped of his Bru,
A smile crossed his face as I gave it some wellie,
and as he chuckled he shook like a fruit jelly.

“Ye’ve done a good job”, said the jolly old Rat,
“Is yer foot still Okay after all that?”
I looked at my slippers, and I felt rather sad,
my blue bunny slippers had suffered so bad.

He spoke not a word and turned to his sleigh.
“Ach Rogi, I’m glad that I met ye today!”
Then laying a finger alongside his nose,
brand new bunny slippers appeared on my toes.

He dropped off the Bru barrel, and gave a long whistle,
In excitement the Haggi had started to bristle.
Then I heard him exclaim as he drove out of sight,
“Happy Cryptmas to all, and to all a good night!”

So it was, Huzzah, that I did my good deed for Cryptmass. Saint Knickerless was able to spread cheer and goodwill and I rolled the Bru barrel into the Hall. Getting it up the steps was the worst bit. “Golly”, I thought, as I looked towards the decorated scary tree, “I’d best be in before Santa Claws visits!” A nice new pair of blue bunny slippers and a barrel of the Bru as well. Not bad eh.

As I ascended the main staircase I heard the Dodo clock squawk twelve. Cryptmass day! Huzzah. So, I made my way back and once more snuggled up next to my beloved Blanche and slept like a log until morning.

Now, just for you…

Ah, you can’t escape them! Huzzah!

(1) This is unusual. Jorcs gets very lively late at night and socialises with the Ghosts of Willorcs Hal. Knows all of them very well indeed.

(2) “Old Grimtwig”, he really is very, very, scary, but is quite nice when you get to know him. Hoom hom!

(3) It is well known that the highest quality cast metal severed limbs are made by Messrs Alternative Armies (Leggies and Headies) of Gurvan, Joccia. Huzzah!

(4) At the Willorcs Arms. Yet again he had to stay over because Bounteous Brenda the Barmaid needed help with the accounts. Poor boy returns looking exhausted. He drives himself too hard at times.

(5) In Particular the Exotic Jasmina from “The Jewel in the Navel” Keybab and Cous Cous bar, The Old Bizzarre in Kairoh where (all together now Tummy Dancing fans) “Every Night is Tummy Dancing Night!” Huzzah!

(6) He sleeps at the bottom of the lake haven tripped over his own clown-shoes. Was a close friend of the “Mad Squire”, my granddad, you know.

(7) Haggi, plural of Haggis, that wild and vicious beastie of the Highland Glens of Joccia. The male (or Bull) Haggis is notoriously savage. This was the subject of Dandy Steward`s famous song “Donald where’s yer troosers?” Donald explains that whatever the direction of the wind, in futre he would only ever wear a kilt to go out in. For some reason Haggi are enraged by the sight of trousers and will tear them to shreds chuntering aggressively.

(8) Best mate of Saint Andy, Patron Saint of Joccia. They’re jolly useful to know too. Saints that is. There are three Patron Saints of Shirewood Saint Lotta Cleavage (also bodice makers), Imbibus (also beers, wines and spirits) and Saint Pylon (for a nasty ailment of the bottom bit)

(10) Lady Elsebeth Gordon, Sister of the General, a very beautiful Lady Rat. She lived to a ripe old age which she put down to her daily “Wee dram”.

(12) Not normally advisable in bunny slippers but, Bru makes you… INVINCABLE!

May the festive season and New Year, bring you everything good.

This article is an Orcs in the Webbe Original and was written exclusively for inclusion as part of it's 2013 Advent Calendar and was first published on the 14th December 2013.