A Flintloque Scenario by Bob Dyer 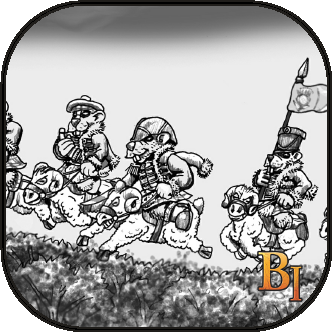 A Flintloque scenario for two players (or solo play) which sees the Bella Manicotti Todoroni face off against some very hungry Joccian hussars.

The iron cooking pot was hot and heavy, groaning on the weighted supports that held it over the small but bright fire on the dirt road. In it a thick meaty stew bubbled and boiled as a billowed out a heavenly scent that would carry for miles in the dry airs of Catalucia.

'Iss thees a good idea Capitain? It eez all of our dinners you ave in ze pot?'

Captain Giantodo Guseppi of the 3o Bella Manicotti sipped the stew from the long ladle he was using to stir it. The idea was his and the recipe belonged to that warty rascal Castolo Ravhoppit the company’s disgraced but talented singer. The Captain blinked one large eye and then replied to his Lieutenant’s question.

'I am sure Vito, this dish of old Nappoly will ave ze buggers come running. An when ze do we will filla dem full of oles!'

Lieutenant Vito Percroki grinned and nodded. He understood the plan and his criminal mind was thinking of the loot which recently shot Army of Albion corpses would yield up in a quick search under his fingers. He nodded and the Captain continued.

'You see Vito, da Ratties is too stupid to tink dis is a trap. They a come down se track and see da pot. Then they tries to eat a da stew and we is hiding over in da trees and we a shoots em.'

With a final florish the two Nepolise officers lifted the ladle and then trotted to the cover of the nearby trees, just of the roadway, where the rest of the 3o was waiting muskets cocked and ready.

It did not take long for the sound of approaching cavalry to reach their slimy ears. A dozen hussars of the Joccian 27th regiment cantered down the dirt road and as they reached the seemingly innocent looking cooking pot and fire they paused. Vito heard them speaking in their strange tongue.

Vito peered out of the leaves and saw two of the Ratmen dismount and peer into the pot. Now was the time to attack. Vito jumped up and fired his musket...

This is a scenario for two players. The first player takes the role of the 3o Bella Manicotti, infamous Todoroni soldiers and the second player some really hungry Joccian Hussars out on patrol.

Please use the section and rules on the following pages for the official Manicotti characters in this scenario. You may roll as normal for Wylde Magicke as normal in the Flintloque rules in the 5025 book.

Use the 5025 War in Catalucia book to generate a section of twelve cavalry. They must all be Lowland Rats and mounted on Rams as per the book. There is one Veteran Character among the Joccians and five Raw and all are Cavalry troop type and are armed with sword and standard carbines. Allocate Skills / Traits / Flaws and Wylde Magicke as normal. There is no points limit but troop type, weapons and experience ratings must be adhered to. 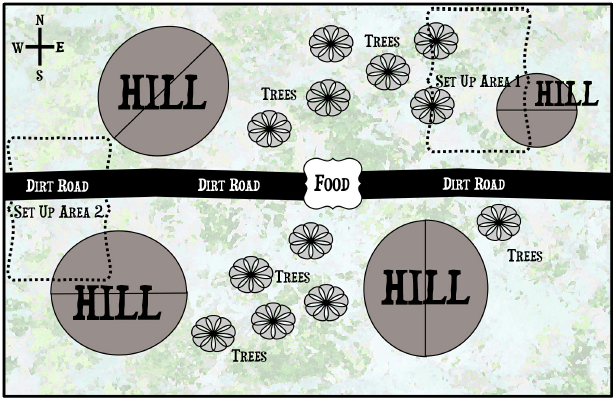 You will need a standard playing area of six foot by four feet (though if space does not allow feel free to change this, but keep the length and width in the same ratio).

The terrain required is outlined as follows and it along with the forces on all sides of this scenario should be laid out as per the map for this adventure.

The surface of the playing area is covered in grass. There are several hills and groups of trees on either side of a main dirt road. The attractive stack of cooking food and bundled supplies is just off the road. This ‘food’ area should be the width of the road and approx 5cm long, it is important to the objectives of the scenario.

Here are the objectives for the two sections in this scenario:

You have laid a trap for the greedy Rats. Wait for them to smell your cooking and then gun them down! An easy victory!

Your objective in this scenario is to kill 50% of the Joccian Cavalry before they leave the table. If you do this you win, if not you lose.

Its been days since you ate. The commissariat sold off all your rations to some K.G.L Ogres (you were not going to ask for them back!), so while out on patrol ahead of the army you are looking for something, anything to eat. It just so happens that while riding down a road between some hovel filled villages you smell the divine! Someone is cooking and you aim to eat your fill.

Your objective in this scenario is for each character in your section to ride down the road and pass through the area marked ‘food’. While passing through your lads automatically grab some food and ride on, this requires no action it is passive. You then must exit the table by the far edge. No member of your section may leave the table until they have eaten, they are too hungry. If you lose less then 50% of your Section doing this you win, otherwise you lose.

This scenario continues until the last Joccian Hussar leaves the playing area.

This scenario has no special rules applied to it apart from the special skills and traits etc for the Bella Manicotti as listed.

In order to play out this scenario you will need the following wargaming items.

Some are essential and others can be exchanged for items you have in your collection. Just make sure that you and any other players are aware of what miniatures represent which forces in play.

56532-U Joccian Hussars
You will need this code and a couple more miniatures. Singles can be had by request from Alternative Armies parts service.

You will also require what you feel to be suitable terrain and several D10 or percentile dice.

It is perfectly possible to expand this scenario to take more forces into account and here is one way to do so.

While the Bella Manicotti set is fixed in size you can add a small section of Ferach Elf Line Infantry (8 characters) to act as back up on the other side of the dirt road; catching the Joccian Hussars in a pincer. Of course you will have to upgrade the Joccians too. This can be done with a small section of five Orc Dragoons on horses. By doing this you can add one or two more players and it turns in to a grand melee of infantry against cavalry with the tasks of food and cover being split up.

This scenario came into Alternative Armies soon after the master figurines for the Bella Manicotti had arrived for molding. We played it out and with a bit of tweaking it came out really well so we decided to get it into this issue of Barking Irons when it had originally been intended for the Notables Yahoo Group.

In terms of how to do your best when playing it all comes down to position and cover. The Bella Manicotti have the advantage of numbers and range of fire from their weapons while the Joccians have speed and better abilities in close combat. So the trick for the Todoroni is to form a rank and fire a volley at the Rats before using the trees and hills as cover. Then continuing to snipe at the cavalry as they try to ride past and eat their fill before riding off.

For the Joccian Hussars its all about speed. Each trooper wants to eat his fill and move on. The choice in this is to do it one at a time and pass on, running the gauntlet, or to split your forces and chase off the Todoroni thereby making the others safe while eating. In our play it seemed better to run the gauntlet.

This article was originaly published on Alternative Armies' content portal, Barking Irons, and is reproduced here with permission.