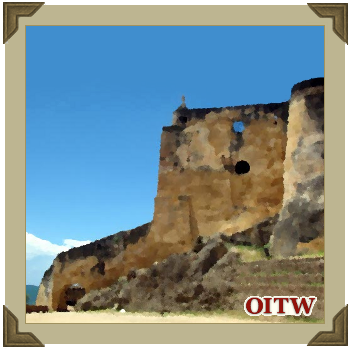 A small crew of Othari corsairs have taken command of Drumbassa and it's defences on the Sosilli Coast. It's up to The Raisin of Marzbar's forces, led by Tarka Bey, and his Al-Garvey allies to destroy Drumbassa once and for all.

On the eastern edge of the Darke Continent lies a cluster of trading ports controlled by a mixture of Otharmen, Halflings and Goblins, and known as the Sosilli Coast. Neither Orc nor Ferach have become involved in the region, but a smouldering warfare between the towns has gone on for years. The scenario here relates to an attack on the proud island city of Drumbassa by Al-Garvey forces supported by the Raisin of Marzbar.

Drumbassa was previously the foremost of these trading ports, but was recently ganged-up upon by a confederation of the other Sosilli states and Al-Garvey privateers. The city was sacked, her defences slighted, and her people scattered to the bush. The previously second-rate port of Marzbar became the preferred trading place for the Al-Garvey merchants, and with a garrison of Goblins installed to support him, the chief (“Raisin”) of Marzbar bullied his neighbours into accepting him as their overlord.

While this was happening, the people of Drumbassa crept out of their hiding places and came back to rebuild their city. Careful not to attract attention, they built new walls but lower and less obvious than before. As they were engaged in their rebuilding, a chance encounter shifted their fortunes – but for good or ill?

Suddenly off the coast appeared a slightly bedraggled Othari galley with an equally battered Al-Garvey merchant ship. The populace of Drumbassa were soon entertained by the approach of a longboat crewed by Othari in bright clothing, and standing in the prow was an officer wearing a gold turban and brandishing a highly polished scimitar. On landing, he quickly announced himself as “Shake Abdul Abulbul, Special Envoy of the Potty”. His mission, he said, was to bring succour to the people of Sosilli and throw off the influence of Al-Garvey!

This is, of course, complete rubbish - “Shake Abdul” is in fact a corsair captain (and not a particularly good one!) by the name of Ali Bai. However, he is a good actor and the slightly senile Raisin of Drumbassa accepted him as a saviour sent by the Othari to punish the Goblins and their friends.

The small crew of Othari corsairs, together with some of the guns from their ships, have taken command of the Drumbassa defences. The Raisin of Marzbar has heard about this, and together with his Al-Garvey allies has set out to destroy Drumbassa once and for all...

The recently arrived Admiral of the Sosilli Coast commands the assault. The Othari corsairs have beached their ships on the far side of the island from the expected attack (partly as they wouldn't expect to win a sea battle, and partly as an escape plan if things go badly). The forces involved are:

20 Goblins
Elite unit, with crossbows (see below) and swords – these were sent out before the advent of Black Powder, and have not been resupplied.

Gunnery support from 5 Carracks offshore – count as 6LB Field Gun (Grapeshotte, p.29) firing at a range of 76-100cm. As this is off table there is no crew/reload. Each Carrack can fire every other turn and have 0% change of the base to hit chance for each shot.

3 Othari and 18 Halflings of Raisin's Guard
Regular unit: Othari with scimitars and/or Standard Muskets, Halflings with daggers or short spears

2 Bombards (use the Joccian 3LB Clan Bombard on Grapeshotte, p.60) each with one Average Guerilla Othari and one Experienced Gunner Othari as crew

3 units of 18 Halflings each
Militia units, with daggers/short spears

In case the attackers are having a hard time, you can add cannibal Halflings (the MaPemba tribe) crossing over from the mainland while the Drumbassans are preoccupied. Try a couple of units of these, as Regulars with hand weapons.

The Crossbows are not covered within the standard Flintloque rulebook but Gavin from Alternative Armies has written the below rules for Hunting Crossbows which can be used:

There are a couple of options for setting up the table. The easiest is to put a wall across the middle of the table (preferably with a gateway) and some houses and huts behind this. In front is the beach and foreshore where the Al-Garvey and Marzbar forces start, and the Drumbassans start on or behind the wall. The wall itself should be split into 10cm sections, each section of defensive wall has 200 Impact Resistance Points except for the section containing the gate which has 125 Impact Resistance Points. The Al-Garvey Carracks are represented by off-table artillery fire.

A better looking game would be with some of the sea represented, and even better with one or more of the Carracks. Obviously this depends on what scenery and models you have at your disposal. If you are able to do this you can fire at a range of 39-75cm with each Carrack present on table. You will also need gun crew for the 6LB cannons, each Carrack starts with 4 Average Goblin Gunners but has an unlimited supply of Raw Marine Goblins (non Gunners). Each Carrack also has 50 Impact Resistance Points, just in case the Bombards try and take them out.

As for figures, the Al-Garvey musketeers are fairly easy, but the crossbow-armed variant would need converting (I used fantasy plastic goblins from a well-known gaming manufacturer, with crossbows from one of their human packs – makes an interesting unit, but substitute musketeers if you don't want to go there!). Otharman Janissaries are ideal for the corsairs and Marzbar Othari, and I used various pygmy and halfling figures.

I actually wrote the first version of this about ten years ago, but it was lost (with a lot of other stuff) when my PC brewed up, and I have only just gotten around to rewriting it. Hope that you have fun with this bit of whimsy.

An Orcs in the Webbe Original! "The Taking of Drubmassa" was written for Orcs in the Webbe's 2010 Countdown to Christmas Advent Calendar and was first published on Saturday 4th December 2010.