Owl Gristle and The Dragons

"The Owl and Dragon Murders""

Lieutenant Rossorc and his brave rifleorcs find themselves pitted against deadly creatures and Magicke unseen by Orcs since before the Time of Annul.

“A chamber spilled out all around them and incredibly as soon as they stepped into it the cold vanished and was replaced with a sweltering heat that made water pour from their clothes and hair as all the ice trapped there melted rapidly. The chamber was long enough for a rifle shot to require careful aim and its whole size could plainly be seen by the light given off by the incredible object that hung suspended midway between the floor and roof of the chamber. It was a magicke lode stone easily the size of an Orc that glowed in every colour of the rainbow.”

From 'The Owl and Gristle Murders'

I do hope that you enjoyed reading the little tale I wrote for this years Orcs in the Webbe advent calendar. If you did then you might well want to have a try at this scenario which is based on events in 'The Owl and Gristle Murders' which will see you either taking the part of Leuitenant Rossorc and his Rifles or the Dracci Lord and his minions as they fight in the magicke chamber underground near the coaching inn. This scenario happens towards the end of the story and begins just after the Orcs have entered the chamber and realised that their foe is none other than the ferocious Dracci; Children of the Dragons. Here we go!

The scenario sees less than a sections worth of Orcs go up against three Dracci and some Zombies while Wylde Magicke makes for mischief and something really seen in Flintloque... actual magicke in the form of lightening bolts and more! I have provided additional mechanics to cover the Dracci Mage and his spells which will work in conjunction with the Dracci statistics for Flintloque that you can find as part of the OITW 2010 advent calendar here. You will need this article plus the one at the link just given along with a copy of 5025 War in Catalucia and 5026 Death in the Snow plus some D10 dice and the normal gaming materials. At a push if you wish to use normal Orcs instead of Zombies for the Dracci controlled minions you could get away with the Flintloque Lite rules.

Miniatures for the Dracci can be found along with those for Orc Rifles and Undead on the Alternative Armies website. I used these codes while playing out the scenario. Orc Rifles were from 5104 Albion Rifles box set, Dracci where from 95540 and 95541 in the High Fantasy range and I used the Undead from 5005 Lady Wintermore's Fangs. Terrain was from the AA collection plus some magic rocks from an old gas fire display which make excellent lode stones!

I have provided a map which gives you the layout of a three foot by three foot table along with starting places for the forces in the scenario. Follow this map and put your miniatures in the starting areas with area one and two for the Orcs, three for the Zombies and four for the Dracci. Here are the force listings for each of the groups as shown on the map. 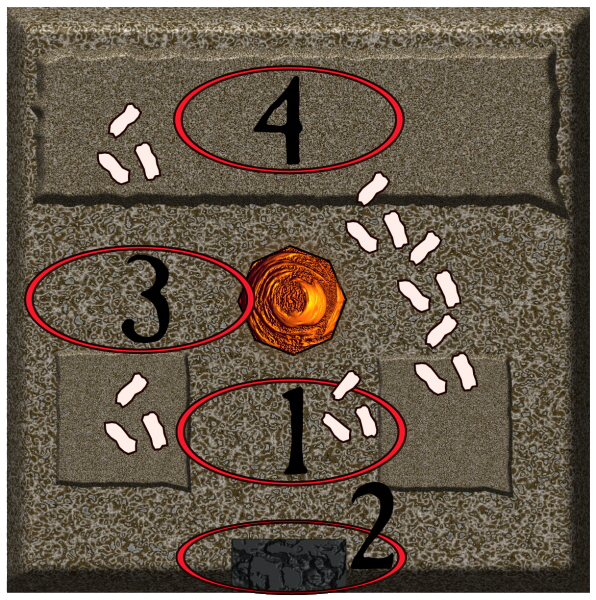 Area One. This group is Lieutenant Rossorc plus five Rifleorcs. All are Albion Orcs. Use 5025 War in Catalucia to create these six characters with these restraints. Rossorc is an officer armed with a sword and a standard pistol; he is Experienced / Light Infantry type. The rest of the rifleorcs are all Light Infantry type and armed with a Bakur Rifle plus bayonet. Experience Levels are Experienced, Average, Average, Average, Raw. You can add skills, traits and flaws based on the story if you want. No Wylde Magicke is allowed (see special rules) and you can name them after characters in the story if you wish.

Area Two. This group is composed of two Rifleorcs who are Albion Orcs. Again use 5025 War in Catalucia to create the characters. Both are Average / Light Infantry armed with Bakur Rifle and bayonet. You can add skills, traits and flaws based on the story if you want. No Wylde Magicke is allowed (see special rules) and you can name them after characters in the story if you wish.

Area Three. This group is made up of four Zombies. You can use 5026 Death in the Snow for these are all four are fresh normal Undead and armed with small improvised weapons. There is no liche for these Undead as they can function on their own and so do not suffer from Brain Freeze or Confusion. They are old style magicke Undead.

Area Four. The bad guys for this scenario are here. Two Dracci Warriors and one Dracci Lord. The lord begins behind the other two and must be on the raised platform. Use the OITW article from the 2010 Advent Calendar to create these characters. Both the Warriors are Experienced / Elite which the lord is Veteran / Elite. One warrior is armed with a Jade Sword the other is a Mage (see special rules) while the Dracci Lord has an Obsidian Sword (treat as Jade Sword). These are some mean hombres.

While playing the scenario it should be noted that all rules are as per the Flintloque books and the Dracci article except for those given here. There is no time limit on the scenario and play continues until one side meets its victory conditions. Victory conditions for the Dracci are to eliminate the Orcs and the Orcs win by wiping out the Dragon Children and/or destroying the lode stone too. Remember the Dracci despise black powder weapons. The first turn begins as normal.

In this scenario all black powder weapons will only fire ONCE if the character making the shot is not in the entrance way to the chamber where the magicke is weakest (Area Two). If in the entrance then normal shots are possible. If a character re-enters this area to reload then they are given one more shot with the weapon on the rest of the playing area; they may do this an unlimited amount of times. The load stone drives all of the magicke in play and it may be destroyed but only by rifle or pistol fire from the Orcs; melee attacks just will not cut it. The stone must be shot at and hit then a D10 is rolled. It needs a result of 10 to smash it on the first shot, a result of 9+ on the second, a result of 8+ on the third and so on. If the stone is broken then all the magicke in the chamber is lost and all weapons work as normal, all magicke spells and talents are lost and all Dracci suffer a -4 on all melee rolls and 50% off movement rates for the rest of the game. The Zombies will simply fall to the ground dead once more.

Special Rules for Orc Magicke.
Due to the lode stone the chamber is buzzing with magicke and this affects every Orc in the chamber. Roll on the Magicke Talent table for every Orc who is in or enters or re-enters the chamber from the entrance way and assign TWO Magicke Talents to them from the table. They may use these magickes every turn due to the power in the chamber. This makes the Orcs a bit more beefed up for the most of the time loss of their rifles.

Special Rules for Dracci Magicke.
Only the Dracci Mage may make use of these spells in play. Each spell takes a full turn to prepare during which time the mage may not move or attack but may defend in melee. The spell type must be declared openly to all players. In the next turn the spell may be discharged at a chosen target. Here are the spells for this scenario.

1. Lightening Bolt. This crackling nimbus of energy is treated as TWO Bakur Rifle shots for range and damage calculations.
2. Fire Ball. Shooting a ball of fire this magicke is treated as a Standard Grenade as it is a 'burst' blast spell.
3. Crush. Invisible fists pummel an enemy. The mage may make one melee attack upon any character in play without consequence or a return attack.
4. Shield. The mage may place a magicke shield around a character or object for one turn. This shield cannot be damaged by any means.

I hope that you enjoy this scenario. I had fun creating based on the events in the story. While it does not play out exactly like the tale it does leave things more open for the players and does not depend on Rossorc making the one decisive shot with his pistol. In four games I lost twice as the Orcs and won twice as them. A tip from my experience is to ignore the Zombies, try and kill the mage (to prevent him using his spells) and then try to shoot out the lode stone as the Dracci Lord is an engine of death in melee and weakening him is well worth the effort.

An Orcs in the Webbe Exclusive !

Gavin Syme is the creative manager of Alternative Armies and head of the World of Valon and Flintloque. Gavin has known of my love of the Dracci species for years and for my birthday each year he kindly puts something Dracci related together for me to read, enjoy and share with the readers of Orcs in the Webbe.

"Owl Gristle and the Dragons" is the follow up scenario to "The Owl and Gristle Murders" and was written exclusively for Orcs in the Webbe's 2011 Advent Calendar and was first published on Monday 19th December 2011.