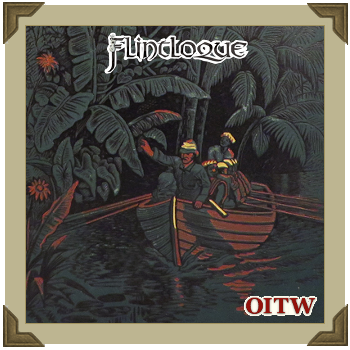 Take charge of a party of Orcs from one of Londinium's Royule Societies and head out from the edge of civilisation to explore Valon's mostly unknown Darke Continent with these open framework rules for use with any version of Flintloque.

With the endless sound of tom-toms in the background, the canoe glided almost noiselessly up the dark, fetid river. In the front sat a tense, preoccupied Orcish Lieutenant, his green skin glistening with sweat and humidity, his frame gaunt and worn by his long journey. The halflings who paddled the canoe sung a low chant about pipeweed and getting their dinner. Chattering monkeys and birds enlivened the dank jungle on either bank.

But ahead he could now make out a clearing, with a crude jetty and village behind it. Now there were more halfling canoes heading towards them, paddlers chattering and chanting. They pulled up at the jetty, and the Lieutenant climbed out. From the village strode an older Orc in tattered clothing. He scowled at the newcomer.

"No mate - go back down this river for about two days, take the fork to the right and follow that until you get to the Moonie Mountains. Carry your canoes and kit up the path marked with skulls, until you get to the big lake. Deadrock lives on an island in the middle. Can't miss it!".

"Oh bugger!", said the now dejected Lieutenant as he got back into the canoe...

While Flintloque is basically a wargame, it does have interesting roleplaying possibilities. One game which works well as either solo or umpired, is an exploration party. The player(s) take a party of Orcs (or other races?), a group of Halfling bearers and some wagons/pack animals, together with provisions, and heads out from the edge of "civilisation" into the inner country.

A typical (Orcish) exploration party from Nutull would consist of:

- Two or more Orcs, armed with rifles, riding horses and in overall charge.
- One or two Boor or Grippa guides, mounted on zebras, and armed with rifles/muskets.
- One or more wagons, driven by Grippas, hauled by oxen, and containing provisions.
- Five or more Halfling bearers, unarmed (or with spears?), carrying further provisions.

Starting from Krapptown, such a party then heads out through the known lands of Krapp Colony, into the lesser known lands around, then plunges into the unknown! Once out of the known territory, the terrain must be randomly generated. If a party explores and returns with their map, then the map is fixed (for your campaign) in the areas explored. If not, then the next party randomly generates the areas again! (Therefore, until a map gets back to Krapptown, none of the explored areas actually exist). Tables and ideas for this random generation follow, but another element are the random encounters on the way. These include wild animals (lion, elephant, leopard, rhino, etc), Halfling tribes (friendly or otherwise), wandering Lizardmen, natural phenomena, etc. Tables for these also follow. This is intended to be a "framework" system, on which an inventive umpire or group can base some interesting games of FLQ, with a roleplaying slant. You also don't have to use my map! Try reading some "historical" descriptions of explorers in Nineteenth-Century Africa, or at least "King Solomon's Mines" (H. Rider Haggard). The map was drawn using an excellent program obtained via TuDragons.

The Orcs should be "officer types" in the main, and should be treated as Average Regulars for most things (you can, obviously, alter this to suit). It does not have to be an Orcish group either; you could run a Ferach party, a Trekkie wagon train, a Goblin trading expedition, or whatever takes your fancy.

Cross-reference the terrain of the starting hex with the die roll (percentage), to give the terrain of the new hex. In the case of lakes or gorge/rifts, the area around it is as the previous hex. Thus, on leaving a "plain" hex, you roll 83 - this gives "mountains" as the new terrain.

For every hex entered, roll for encounters/events according to the terrain:

Nothing - nothing notable happens (i.e. no obvious danger!)
Army - usually halflings, but possibly Othari in desert areas. Can be training, raiding, moving camp, or on campaign. May even be in the middle of a battle! On a lake, this represents a fleet.
Earthquake - will have varying effects, depending on the terrain. Will cause a tidal wave on a lake!
Explorer - a similar group to the players. May be Orcs, Ferach, Gnomes, etc.
Halfling - in plains, scrub or hills, these are tribes organised along N'looni or Xharfooti lines, while jungle tribes are more secretive. Marsh-dwellers live in huts on stilts (or on rafts), while mountain tribes live in caves. On lakes, these are fishermen. Mainly armed with short spears (as bayonet), some use blowpipes (particularly jungle-dwellers, treat these as pistols).
Herd - a large group of herbivores, type depending on location, but can include zebra, gnu, camels, ostriches, etc. Many can stampede at short notice!
Insect Swarm - a huge number of biting insects (mosquitos, etc).
Patrol - a military patrol. Usually halfling or Othari, but can include other races (from nearby stations).
Plague - an area contaminated with disease! The party is in great danger from this.
Quicksand - any variety of treacherous ground (mud, quicksand, etc).
Rockslide - especially in the mountains, these can bury a party in short order.
Slaver - usually Othari and/or halfling, these are on the lookout for potential slaves (and that may include the party!)
Storm - can be dangerous - due to lightning, wind damage, sand-storms, etc.
Trader - usually Othari, but may be other races. Attempting to trade with halflings.
Trap - includes elephant traps, "Vietnam" style crossbow traps, and sandbanks on lakes (which can also provide sudden danger).

As can be seen, these notes are fairly vague, as every referee will want to put their own "spin" on things.

For animal/monster stats, I recommend a look at "Wylde Thinges" ~#~ by Matthew Hartley for some inspiration.

Best of Orcish to you, young fellow-me-lads!

"Dr Deadrock, I Presume" was originally published on Danny's old website, Weird Wars, on Sunday 16th April back in 2000.

It was reproduced here on the 11th December 2011 as part of the 2011 Advent Calendar with kind permission from the author.

* The image is from the first edition of Henry Stanley's Through The Dark Continent Volume One. It is used without permission and will be removed if requested by the copyright holder.