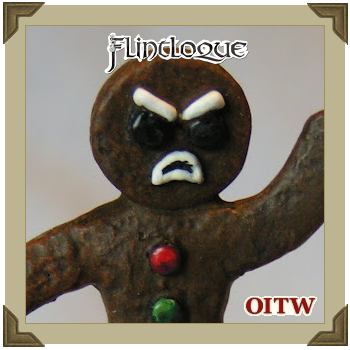 After a series of gruesome murders amongst the culinary community and it's customers,  Valon's famed consulting detective Sherloque Holmes and his assistant, Dr Watsorc, have tracked the cinnamon scented beast responsible to it's lair.

The teaming metropolis of Londinium is home to races from all across Valon. Exiles and refugees mix with spies and wanderers from across the continent. Penniless arrivals search for their fellow countrymen in the teeming city, seeking charity or employment amongst their kinfolk. Those from a nation cluster together, usually in the poorest and meanest rookeries in the city, looking for mutual support, and protection from their harsh new home. And some will aid their defence with a little magic...

...Ostaria is famed not just for it’s noble hounds but also for its Dwarven pastry chefs who produce edibles finer than the usual dog’s breakfast. Yet even these exponents of shoe pastry (a favourite with their canine masters), have been forced to flee to Londinium for cooking up plots against the Ostarian state.

To defend themselves in the mean streets of their new home, the Ostarian Dwarves have created a legendary figure - the fearsome Gingerbread Dwarf.

Alas the creature, with a little too much cinnamon in the mix, has attained a degree of intelligence. Shocked by the brutal fate awaiting it’s fellow baked goods, it has embarked of a series of gruesome murders amongst the culinary community and their customers.

Using mere crumbs of evidence, famed detective Sherloque Holmes and his assistant, Watsorc, have tracked the creature to its lair.

The creature is aided by four Dwarves, who are terrified of the creature and too scared to admit their guilt to the authorities. Holmes and Watsorc are alone, but Holmes has enlisted a secret weapon – mice!

The lair is a warehouse, filled with long rows of containers of various dried edible goods. Use whatever terrain you have availble to create a suitably cluttered environment (kitchen matchboxes make creat storage cupboards). An area 2 foot by 2 foot square should be sufficient for this scenario.

The creature is armed with a Baker’s Paddle (Large Improvised Weapon).

If the Gingerbread Dwarf is destroyed, the Dwarves will surrender.

Sherloque Holmes [Veteran Regular Orc]
Sword, Standard Pistol
Holmes is a master swordsman and has an additional +2 bonus with the weapon. He does not need to make morale checks as is totally self-confident. At the start of the game there is 15% chance that he is on laudanum which gives him a one left column shift to all shooting rolls and a +1 bonus in melee.

There are also two bases worth of mice in play. They may move 15cm per turn. Each base represents 40 or so animals. The mice may only attempt to attack the creature, not the Dwarves. Each turn a mice base is in contact with the Gingerbread Dwarf, roll a d6. The creature takes a wound on a roll of 5 or 6. If the Gingerbread Dwarf is attacked by mice, it must attack the mice that turn and can not move. The creature destroys a mice base on a roll of 6 on a D6.

An Orcs in the Webbe Original !

The above scenario inspired Tony Harwood to create a model of the Gingerbread Dwarf, two of his assisstants and their evil creator, Bakerov. They have been cast in metal by Alternative Armies as part of their VLE Flintloque range limited to only 250 sets. You can see it here on thier website.

You can also read about the sets creation and subsequent 'on line build' in which Tony paints them up here on his blog.

"...And He Had Raisins for Eyes !" was written exclusively for Orcs in the Webbe's 2011 Advent Calendar and was first published on Tuesday 20th December 2011.