Rules for Hunting in Flintloque by Christian Cuello 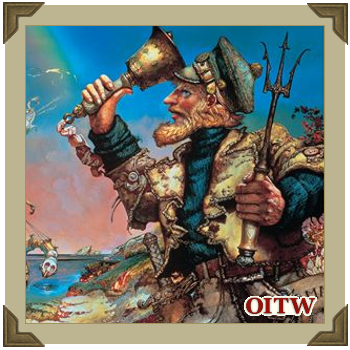 Image from the album cover of Mike Batt's 1986 musical, The Hunting of the Snark

The gentlebeing's clubs of Valon, including the most distinguished Notables Club on Mudfayre, like nothing more than a jolly jaunt out in the countryside tracking down not-so-defencless anmials in a bid to bag something to go on the wall of the trophy room.

“They hunted till darkness came on, but they found
Not a button, or feather, or mark,
By which they could tell that they stood on the ground
Where the Baker had met with the Snark.”

Lewis Carrol, The Hunting of the Snark

This can be played with two or more players, or even solo. You could set up a small hunting party on horseback or on foot, or even just a lone hunter stalking his or her prey: is it animal, or supernatural? It’s quite a flexible scenario as you will see.

The purpose of the scenario is to successfully ‘track’ your quarry by accumulating points in the form of track tokens. When you reach a certain amount of points, the hunted creature reveals itself.

Although, there’s always a chance your prey gets the jump on you… so tread lightly!

Setting up for Play

Your board can be set up with quite a bit of freedom, but plenty of terrain to emulate the forests of Valon would be ideal. It might be interesting to throw in a hunter’s cabin or perhaps something more perilous – a fast-flowing river? It’s up to you!

At the beginning of the game, a nominated player must roll a scatter/directional dice for wind direction. This doesn't have much of an effect until later in the game (see below). This arrow is the predominant wind direction for the rest of the game, but can change throughout the game.

Weather types are also generated at the beginning of the game, comprising: clear day, light rain, heavy rain, snow. It can be daytime or night time. See 'Grapeshotte' p. 21 for further rules on weather conditions and night-fighting.

A major part of setting up the scenario is the placing of "track" counters on the gaming table. These are small objective counters representing paw/hoof prints, snapped twigs, droppings, or perhaps the remains of last night's dinner.

The main objective for the hunters is to "capture" these counters and accumulate points.

Distribute these randomly around the board, starting from a nominated table edge and placing subsequent tokens in a random direction and 2d6 inches distance away. How many you deploy and what the goal is is up to you, depending on how long or how challenging you’d like your game to be.

Movement around the playing area is prompted by following the track counters. A hunter can collect these provided they are no more than 5cm away. This is a standard action, as the hunter examines the tracks and determines what to do next.

Once collected, the player rolls a D6, consult the table below:

Once these points reach a goal determined at the start of the game, the tracked beast, or its lair, is spawned in a random direction. If the line drawn by the direction of the wind cross the path of the hunter and the beast, the beast is aware of the hunter and will respond as per Matthew Hartley's Wilde Things scenario.

Otherwise, it appears in play but is unaware of the hunter’s presence until the next turn or once it is attacked (whichever comes first).

Once each turn - but after rolling for initiative - a single D6 is rolled. If a 1 is rolled, the player(s) must consult the following table for the outcome:

D6 / Outcome
1 / Random figure caught in a bear trap (ouch!) - take X damage and miss a turn.
2 / A stray shot comes flying out of the trees and hits a random player figure.
3 / Random opponents appear*.
4 / Change in the weather
5 / Change in the wind
6  / Disorientation (player misses a turn)

*A “pool” of opponents can be generated prior to the game. They could be lesser wild creatures, roaming vagabonds, or a vampire’s minions. Typically they are are more of a nuisance than an outright challenge...

Also, keep in mind that the hunter’s quarry might not even be an animal at all. Perhaps it is an escaped prisoner or convict, and you are the commissar/provost in charge of bringing him in. Or perhaps there’s a crazed killer on the loose, and the tracks are clues to their whereabouts… you could take the role of an investigator or vampire hunter. Or maybe you’re part of a small scouting party looking for some dinner…

The scenario can be resolved in one of two ways: the hunter may successfully track its quarry, or the trail might run cold.

This article is an Orcs in the Webbe Original and was first published on the 4th December 2015 as part of its 2015 Advent Calendar.