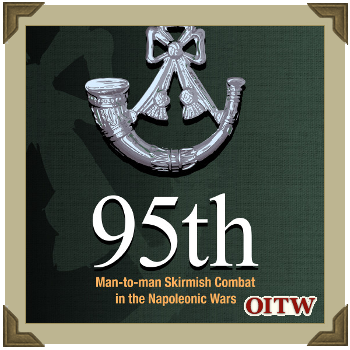 For those of you unfamiliar with the wonder that is Valon, it is a fantasy world populated by the usual suspects; Orcs, Elves, Dwarves. It also contains a few less usual; dogmen, bipedal toads and rabbits, to name but a few. Valon was once your typical fantasy world until, that is, the advent of black powder. Having harnessed this destructive new power the fantasy races destroyed the remaining humans and fell to fighting amongst themselves in a manner strangely analogous to our own Napoleonic Wars.

Alternative Armies, the publishers of the fine Flintloque rule/source books offer a comprehensive range of 28mm figures portraying the Greats, not so Greats, and downright Ingrates locked in battle on the fields of Valon.

Flintloque is a great game in its own right, and interested parties ought to give the free Lite rules a spin.

That having been said, I do enjoy the Two Hour Wargames way of war gaming and what follows are the rules I use to play games of 95th set in the world of Valon. I do hope you enjoy them as much as I do.

This is a revised version of Flintloques and Muskets. The previous version was published on Orcs in the Webbe in 2011. The update brings Flintloques & Muskets into line with the systems in 95th.

THW's Chain Reaction 3.1:Final Edition is available as a free download here and you can buy the supplement 95th here.

Alternative Armies' 28mm Napoleonique Skirmish Ruleset, Flintloque, and the large range of miniatures that go with it can be found here.